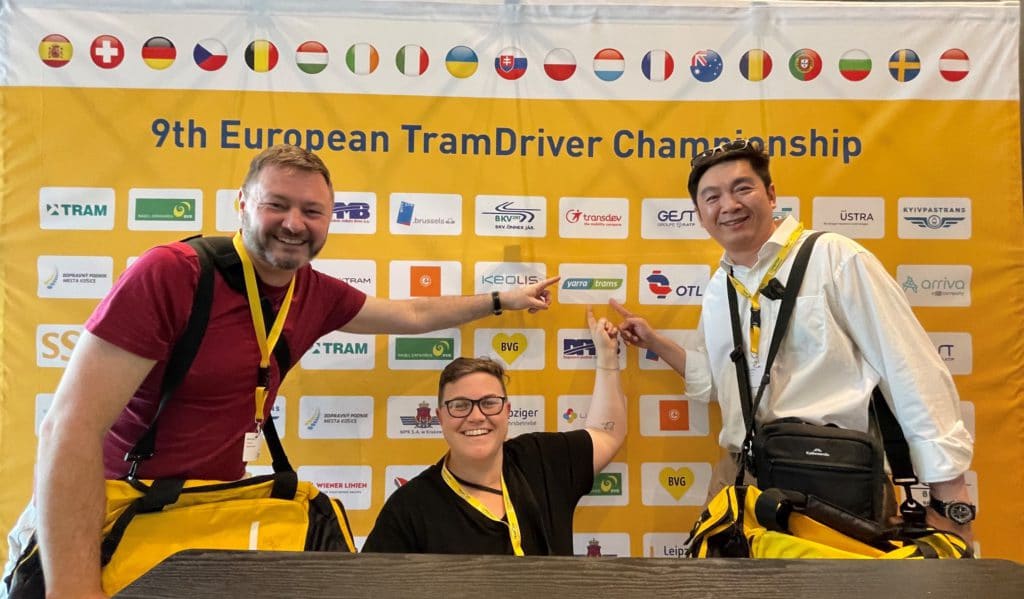 Melbourne’s Yarra Trams has placed 10th out of 25 teams participating in the European Tram Driver’s Championships.

The world’s most skilled tram drivers came together at the  weekend to test their skills and vie to take home the title of world’s best tram driver at the event.

Australia was represented by experienced Yarra Trams drivers Amanda Paul and Frendy Lim, who have each been driving trams in Melbourne for more than five years. Paul took 15th in the individual competition, while Lim finished in the top half with a strong 24th place slot. They were assisted by Malvern Depot team manager Wayne Speers, who served as the ‘team coach’ for the event.

The team of drivers from Hannover battled through to take the title with consistently strong performances on each challenge. Teams from the Ukrainian cities of Lviv and Kyiv took 5th and 6th respectively. Each of the 25 teams from 19 nations consisted of one male driver, one female driver, and a team coach.

After the cancellation of the 2020 and 2021 competitions due to COVID restrictions, the competition was back for its 10th year, with teams gathering in Leipzig, Germany to compete in a series of safety and precision-driving based challenges. One of the best-loved challenges from previous years, tram bowling, returned, as well as the debut of ‘tram billiards’ which proved challenging for drivers.

Ahead of their departure for Europe, Paul and Lim completed a training day at New Preston Tram Depot where they practiced safety-critical skills including precision stopping, speed estimation and smooth driving. They also had the opportunity to practice tram bowling with a massive 1.5m inflatable bowling ball.

Yarra Trams is the world’s largest tram network, with 1400 drivers operating approximately 500 trams across more than 250km of double track through Melbourne’s streets.

Yarra Trams is currently recruiting more than 150 new tram drivers over the course of 2022, and those interested in exploring a change of career, or re-joining the workforce are encouraged to visit Yarra Trams’ careers webpage.

Yarra Trams chief executive officer Julien Dehornoy said the organisation was proud of the participants for their hard work preparing for the Championships, as well as securing a top-10 result in the debut showing.

“I was on the edge of my seat watching on Saturday night and the team did us all proud, representing Yarra Trams and Melbourne on the world stage,” he said.