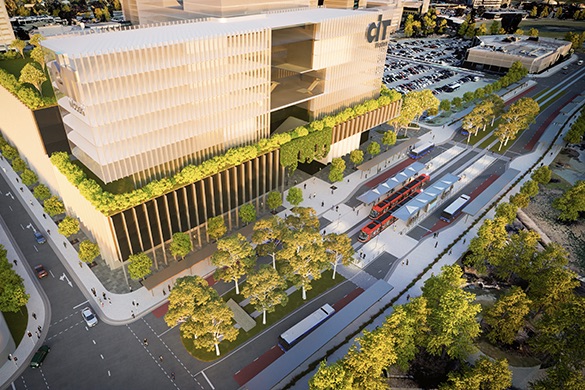 The future terminus of Stage 2 of Canberra Light Rail is taking shape, with consultation beginning in 2021 on the Woden transport interchange.

The interchange will allow for passengers to travel between the future light rail service and buses, while also connecting Woden Town Centre and the Canberra Institute of Technology (CIT) campus to public transport, said ACT Minister for Transport, Chris Steel.

“The new public transport interchange is a crucial project for the transformation of Woden Town Centre, to ensure Woden is ready for light rail, and to enable the new CIT campus to be built on the site of the current interchange,” said Steel.

“Building a new on-street bus interchange on Callam Street was a key feature of the Woden Town Centre Master Plan and we are seeking to deliver that vision.”

The new combined light rail station and bus stop will replace the existing bus facilities, built in the 1970s. The increased demand forecast from the new CIT, built on the site of the current bus interchange, would overwhelm the current facilities. Until light rail comes to Woden with the completion of Stage 2B, the facility will be used by buses, said Steel.

“We’re proposing to build a single transport interchange that integrates up to 18 bus stops whilst considering the inclusion of a light rail terminus as part of the light rail project.”

The community and stakeholders are invited to give feedback to the project team, which will support the design and development of the new interchange, layovers, and road upgrades, as well as contributing to the urban design of the area.

Steel said that the interchange will be part of an invigoration of the Woden town centre.

Stage 2B of Canberra Light Rail is still awaiting approvals, with the project particularly complex due to it traversing the Parliamentary triangle. Operations are expected to commence by 2025 on Stage 2A, extending the existing line to Commonwealth Park, however a firm opening date for Stage 2B is yet to be announced.