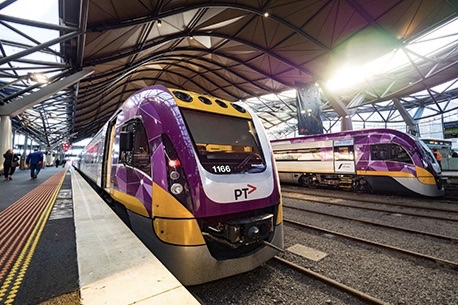 The locally designed and built VLocity fleet has marked a major milestone, clocking up 15 years of service and over 370 million kilometres travelled.

First introduced to the Victorian regional network in 2005, the fleet, manufactured by Bombardier Transportation, has now grown to 88 vehicles, with more on order after the Victorian government purchased an additional 18 trains in 2020.

“The VLocity train built proudly in Victoria for Victoria – from the ground-up – is a truly remarkable train that has well and truly stood the test of time,” said Wendy McMillan, president Australia and New Zealand at Bombardier Transportation.

“The 15 years and 370 million in service kilometres – equivalent to an astonishing 9,282 trips around the world – is testament to the workmanship and quality of what Bombardier produces in Australia.”

Local design and components are a significant part of the trains and the re-designed trains recently won two Good Design Awards.

“We are proud of these vehicles but so too are our local suppliers, who provide 69 per cent of the content used to manufacture these trains,” said McMillan.

Soon, more communities than before will be able to ride the VLocity trains, with V/Line to deploy a standard gauge variant on the North East Line.

In Canada, Bombardier Transportation will supply 205 rail cars for Vancouver’s SkyTrain network. Designed and built in Canada, the 5-car automated trains will replace older rollingstock and prepare for the extension of Vancouver’s metro system.

In France, national operator SNCF has ordered 33 OMNEO Region 2N trains from Bombardier, extending an existing order. The trains will operate on the Hauts-de-France region and include passenger amenity improvements built in.

A consortium of Bombardier and Alstom was selected in late 2020 to supply 204 M7-type coaches to Belgian operator SNCB. The double-deck trains provide autonomous accessibility for those with reduced mobility.