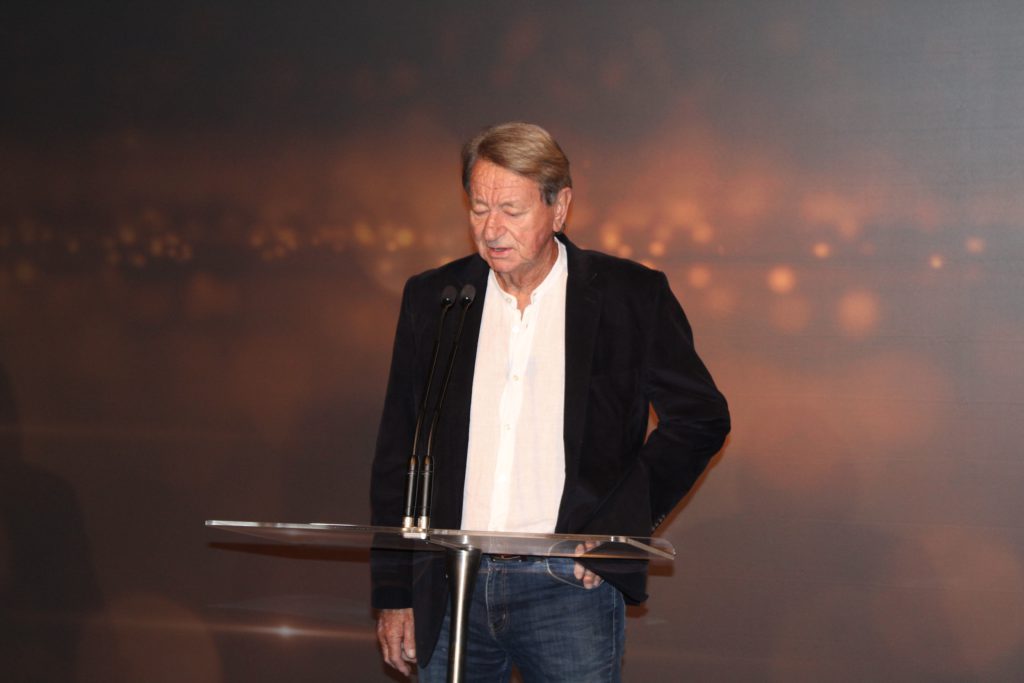 SCT Logistics founder and director Peter Smith accepts the award for Personality of the Year.

Recognising a career of over 40 years in the rail freight industry, in November this year SCT Logistics founder and current director Peter Smith was awarded the Australian Freight Industry Award for Personality of the year. To mark the accolade, Rail Express sat down with Peter to hear how the company emerged from humble beginnings to where it stands today.

REX: How did the story of SCT Logistics begin?

Peter Smith: I began my transport career as an interstate truck driver moving produce and general freight on the Melbourne to Brisbane corridor. In 1974, I established SCT in Melbourne after myself and my partners sold Cubico Road Transport to Mayne Nickless Limited. Following the sale agreement I realised that there were significant opportunities on the East-West corridor in moving freight on rail. I recognised that due to Perth’s distance from the eastern state capital cities, rail provided a cost effective, competitive rate against road transport, especially when moving large volumes of freight. The rail box car model compared favourably on a payload tonne to tare mass loading configuration. It allowed provision for consignments from single pallet to a full truck load with the capability of blending and mixing of freight to maximise the load and cubic capacity of the box car. This concept led to the formation of Specialised Container Transport (SCT) and some years later the name was changed to SCT Logistics.

REX: What was the environment like then for a private rail freight operator?

Smith: The whole network was essentially government-owned and controlled. It allowed for little innovation and long term strategic structural changes. Any strategic direction had to be centred on the limitations imposed by the government-owned rail operators and track owners. Rate increases formed an integral part of the operating parameters of the industry and it was common to receive bi-annual increases with no incentive to drive efficiencies.

Different track gauges also added to the complexity of rail. The journey involved delays in Adelaide to carry out bogie exchanges, on the forward and return trips. Surprisingly, even with all these inefficiencies, rail was nevertheless very competitive with road at the time.

REX: How has the rail freight industry changed since then, particularly with the wider privatisation of the industry in the 1990s?

Smith: SCT was the first company to provide private rail freight services between Melbourne and Perth, with its first service occurring on July 7, 1995. SCT was able to commence its own rail service as a result of microeconomic reform resulting from the Hilmer report. SCT was then averaging around 20 box cars per week, between Melbourne and Perth, with its growth dependent upon “hook and pull” services provided by National Rail. The business was exposed when National Rail cancelled the box car (louvre vans) services between the East and West coast. Rather than convert to a totally intermodal operation, SCT decided to commence its own services.

The reforms provided the opportunities for private companies to excel and to do what they are best at, which primarily encompasses strategy, innovation, efficiencies and customer service, which were previously lacking. SCT was able to secure the procurement of two train sets equivalent, incorporating three ‘G’ Class Locomotives, long term hire of two National Rail locomotives and a large number of box cars, as part of an undertaking to the ACCC by Pacific National, which had purchased National Rail. The procurement of the two train sets was a complete game changer for SCT as it was now in a position to commence its own totally independent rail services between Melbourne – Adelaide and Perth.

SCT began to provide its customers and the market with efficiencies, by shortening the transit time and reducing delays. This cut down the time between the East coast and West coast, from over 5 days to a reliable, 2.5 day journey time.

REX: How has SCT been able to thrive in the years since?

Smith: SCT has become synonymous with innovation. Along the way SCT recognised an opportunity existed with refrigerated freight and introduced a purpose built, fully insulated temperature controlled racked rail van for chiller and frozen rail transport. The services were complemented by provision of cold store facilities at each of the major terminals. The cold stores provided an interface between rail and road to ensure the integrity of the cool chain at all times. The Chiller Rail Van was able to compete favourably with containerised rail and road with the division growth equating to around 30 per cent of the SCT East-West freight task.

REX: How has SCT grappled with the challenges of COVID-19?

Smith: On an overall basis, Australia’s landside rail and road industries and networks have held up incredibly well, dealing with the unprecedented buying peaks that our supermarkets had to contend with. The changing conditions around border controls and quarantine conditions for our train drivers crossing interstate borders proved challenging, however ultimately a success for our team, government, and the broader rail industry. Through the pandemic we’ve seen foreign shipping companies cease movement of our domestic cargo, so that’s placed significant pressure back onto the rail operators, in particular in covering those volumes on the East-West market.

Victoria is a strategic hub for the SCT business bookending both our Melbourne to Perth and Melbourne to Brisbane rail services. Our immediate objective was to protect our staff and endeavour to avoid a closure of our Altona terminal.

REX: What challenges does the rail freight industry face today?

Smith: Interstate rail has been facing declining trading conditions for several years primarily associated with an inequitable regulatory system that disadvantages rail against other modes, especially around operating costs. Rail has had to absorb annual access increases, whilst road and sea, at best, have had very minimal increases, which, over an extended period, has competitively disadvantaged rail.

The disparity gap in access pricing on rail continues to grow, it has now reached a point that the industry is unable to offset against any productivity gains.

In the case of road, despite publicised objectives around reducing emissions, road trauma and road maintenance, federal and state authorities continue to support increasing volumes onto our roads at the expense of rail operators by holding a fuel rebate subsidy that we would argue should not exist.

The significant enhancements to productivity on the back of the increased approval rate of higher productivity vehicles has meant that in comparison, the sustainable price position experienced by rail over road has all but been diminished by these structural issues impacting the sectors.

Foreign sea operators now operate ships with a TEU capacity in excess of 10,500. This has also been increasing in recent years, offering productivity gains in excess of 30 per cent, while at the same time paying the equivalent of zero access for their blue highway. Foreign vessels presently are able to fill gaps within Australian ports. Sea freight continues to provide the rail industry significant challenges, for example on the East Coast, in particular large volume FMCG which were previously not considered suitable for sea travel. The scale of the loss of business to sea freight on the East-West corridor through these structural inequities is now significant. Sea pricing is now up to 60 per cent cheaper than rail linehaul rates, which allows customers to invest in extra stock holding in the West to circumvent risk of any network hold ups.

We have already witnessed a major interstate rail operator exit the market because it was unable to attract sufficient volumes at a viable rate to recoup its operating costs.

There have been minimal enhancements to rail productivity provided through the national network. The average journey time is increasing, the 1,800 metre length restriction and maximum axle weight loadings have not been improved to provide rail operators productivity and efficiency benefits to compete with other modes.

The disparity in regulations between the modes that presently exists needs to be addressed by government especially issues specific to wages, taxes and access charges. Unless this occurs sooner rather than later the ongoing demise of Rail is inevitable.

REX: Despite these challenges, how can rail freight continue to survive and thrive?

Smith: How does rail continue to grow and prosper? Innovation is a must and should be top of the agenda. SCT is looking to progressively introduce newly designed rollingstock concepts and update terminals to accommodate the new concept rollingstock. The new design terminals will reduce turnaround time, providing significant efficiency and cost saving. SCT is working closely with the track owners to reduce down time, increase permissible length and axle loading. SCT is also exploring the acquisition of suitable non-fossil fuel powered locomotives, that will not only reduce emission, but will significantly lower its fuel and the overall rail service running costs. SCT has always been able to rapidly adapt to changing market trends and it is focused to ensure it continues to do so.