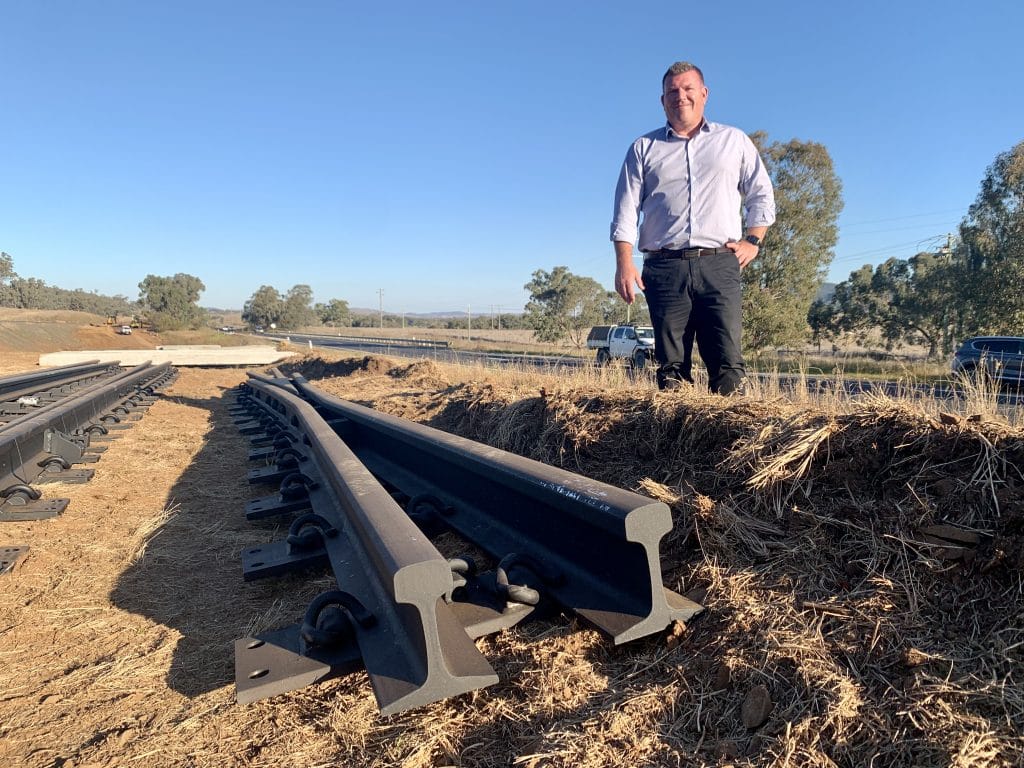 A multi-million-dollar upgrade of the Main West Rail Line through New South Wales’ Central West is providing more efficient access to market for producers via a critical freight route.

“These passing loops are the equivalent of rail overtaking lanes, which lead to less congestion and reduced waiting times for passenger and freight trains entering a section of track,” he said.

“This upgrade is essential because freight movements along the Main West Rail Line are forecast to grow to 11.5 million tonnes by 2056.

“Freight such as grain, cotton, meat and fresh produce will be able to get to market quicker than ever before and with more freight able to be transported by rail, motorists can expect fewer heavy vehicles on the road.

“The upgrade to the Main West Rail line is part of our record $14.5 billion spend into regional roads and transport infrastructure, building what matters to make daily life easier.”

The most recent passing loop was completed at Bumberry near Parkes, along with three other projects also delivered in 2021 at Polona near Blayney, Pinecliffe near Molong and Maryvale, north of Wellington.

In the past, there were limited passing opportunities on the single-track Main West Rail Line, particularly for longer freight trains. The new and extended loops alleviate those issues, creating more capacity on the busy line.

As well as the four passing loop projects delivered in stage two of the program, a further $2 million has been allocated for the investigation and development of potential future projects on the Main West Rail Line including loops, rail sidings that support loading and unloading freight, and upgrades to sections of track to accommodate heavier trains.

Under stage one of the program, $21.5 million funded the construction of two rail crossing loops between Blayney and Lithgow at Georges Plains and Rydal.

An estimated 100 jobs for regional workers were supported during the peak constriction phase of each project delivered as part of stage 2 of the program.

Member for the Dubbo electorate, Dugald Saunders, said the Maryvale loop would deliver time savings of up to an hour and reduce congestion along the Main West Rail Line for freight and passenger services between Orange and Dubbo.

“Passing loops allow modern and longer freight trains to pass each other and create additional capacity on the busy western line as well as providing more flexibility with timetables,” he said.

“The freight task in regional NSW will grow by 12 per cent to 286 million tonnes by 2036, so it’s important we invest now so that our infrastructure continues to serve generations to come. This project has created local jobs, stimulated the local economy and will deliver ongoing benefits to our region.”