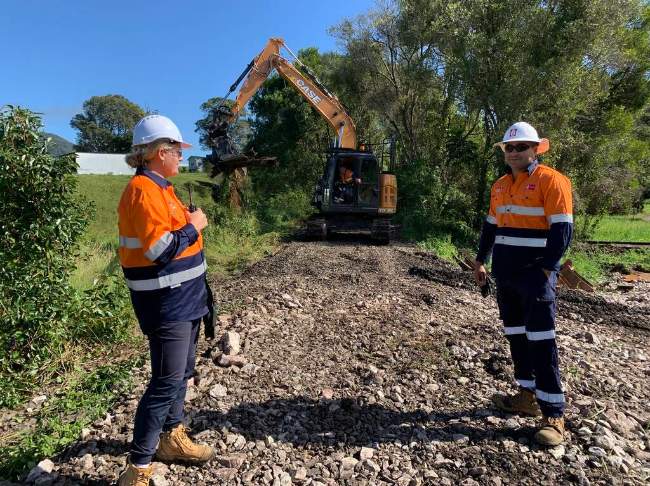 Rail trail workers on site at Stokers Siding. Construction is set to move forward with alignment plans for the Tweed leg of the Northern Rivers Rail Trail finalised.

The Northern Rivers Rail Trail in New South Wales is starting to take shape, with alignment plans of the Tweed section of the trail now finalised.

Tweed Shire Council has released a series of trail alignment plans for the 24 kilometre route which stretches from the former railway station at South Murwillumbah to the southern Tweed village of Crabbes Creek.

This ‘first look’ at the trail alignment provides residents and rail trail enthusiasts with greater insight into the final trail route, including the location of sealed and unsealed sections of the track.

The plans reveal the location of pathways which will link the rail trail to the Tweed Regional Gallery and Crabbes Creek village, as well as locations of bridges, platforms, bypasses and emergency markers.

Project Director Iain Lonsdale said finalisation of these plans was a key milestone for the project given the community’s interest in the alignment of the trail.

“The Northern Rivers Rail Trail will be a great resource for our community and will help make the Tweed an even greater place to live,” he said.

“The final alignment plans gives the community certainty and represents another key milestone towards delivering this exciting piece of infrastructure for the Tweed.”

Lonsdale said a more detailed Trail Development Plan would be released in coming weeks and would provide more details of the final design and landscape treatments of the trail.

“It’s great to see this progress being made. We are now getting a much clearer picture of exactly what the rail trail will look like when it opens early next year,” he said.

“We can definitely feel the anticipation and excitement building in the community. People are starting to make plans about how they will take advantage of the opportunities this great recreational asset will present.

“Families are getting excited about having a safe place to walk and ride. Others are eager to explore our fantastic local villages and soak up the beautiful Tweed Valley landscapes and learn more about our history. Businesses are also gearing up for the many commercial opportunities the trail will present.”

The rail trail will see heritage bridges restored and places of cultural significance acknowledged and celebrated. It will also provide access to rail heritage not otherwise available to the public and deliver an accessible community resource designed for people of all abilities to enjoy.

The trail alignment plans can be viewed at www.yoursaytweed.com.au/railtrail.