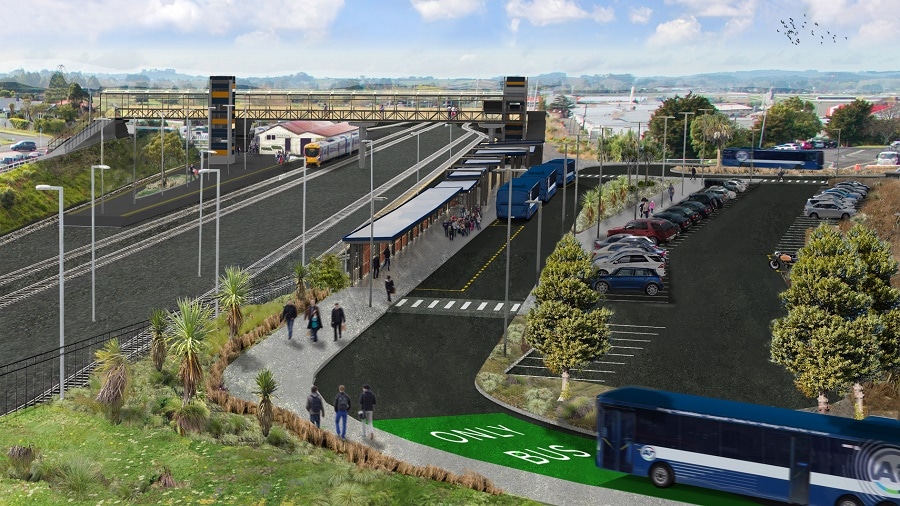 Artist's impression of the new station.

KiwiRail and Auckland Transport are working together to build a modern train station suitable for future needs as the town of Pukekohe grows.

Auckland’s metro rail network was electrified in 2015, and as part of the New Zealand Upgrade Program in early 2020, KiwiRail received funding for the electrification to be extended to Pukekohe.

When completed in 2024, customers travelling from Pukekohe across Auckland will no longer need to switch trains at Papakura and will enjoy faster, quieter, and cleaner journeys in modern electric trains. Customers will also experience faster and more frequent services.

The new station will include:

• A new platform layout to accommodate longer trains. Initially platforms will serve six-car trains with an option to extend them to nine-car trains in the future, providing more capacity
• Removing the existing station building and building modern passenger facilities such as new shelters, AT HOP machines and easy access to complement the bus interchange
• Installing new overhead power masts and changing the track layout for trains to pass easily and safely through the station area
• Building new electric train stabling (where trains are placed when not in use)

In November 2021, KiwiRail and Auckland Transport announced that the Pukekohe shuttle service that connects Papakura and Pukekohe would be suspended from mid-2022 until the second half of 2024, to accommodate the significant work that needs to be carried out on the 19km section of line between the two locations until 2025.

Most of this work will require at least one track, and often two, to be closed at multiple locations along the route.

To enable this, Auckland Transport has agreed to replace the ageing Papakura–Pukekohe diesel train shuttle service with buses from August 13, until electric trains can run on that stretch of track.