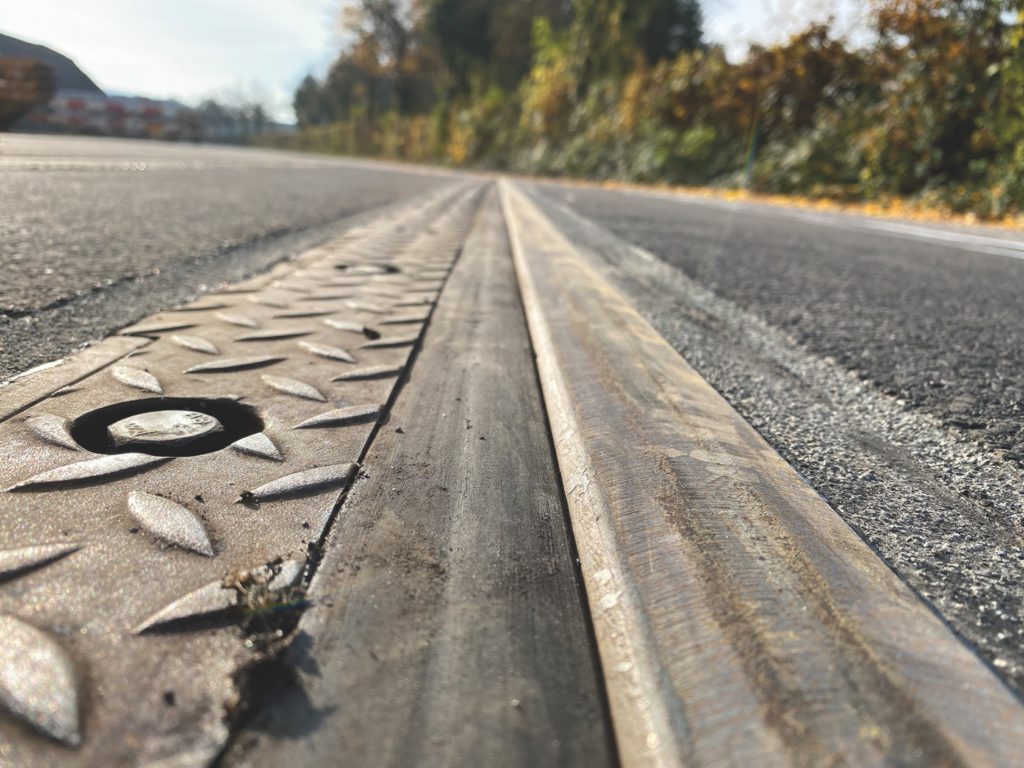 The VeloGleis is a solution for the merging of cycling and rail transport.

With the impending requirement for transport operators and providers to be compliant with the requirements of Disability Standards for Accessible Public Transport legislation, there is a need for solutions that reduce the risk and harm to wheeled users when crossing tram tracks. VeloGleis has been developed to reduce severe injuries at these high-risk locations.

The flange way of all rail systems poses a risk to wheeled users around the world. Australia has not been immune to accidents between users and all forms of rolling stock or serious accidents occurring with cyclists interacting with the permanent way. There has been significant product development by specialist suppliers over the last two decades to find solutions for level crossings, to help mitigate the risks at pedestrian crossings or at road level crossings on large skew angles. These solutions have also given transport operators the ability to upgrade and enhance these crossings to ensure legal compliance with DDA gap requirements.

However, there is the continuing risk at locations where bicycles and trams overlap. Serious accidents occur again and again when bicycle tyres get caught in the rail grooves of tram tracks. These risks are ever increasing as urban transport policies promote the increased use of cycling in our major cities with dedicated cycleways being incorporated into our road network. Couple this with infrastructure upgrades of tram stops for DDA compliance, often moving the stops from roadside to adjacent to tracks changing the interaction between trams, road users, cyclists and pedestrians.

This often requires cyclists to go up and over the platform. At peak times, this is not always possible and riders often have to make a split second decision to change and ride in the tram tracks. Experienced cyclists know that they must never cross the grooves at a sharp angles, but the risk is ever apparent. In the accident statistics 2020 of the VBZ Zurich, there were 613 reported accidents involving at least one bicycle. Figures could be much higher, however, as minor accidents frequently go unreported.

Closing the groove with the simplest materials, such as rubber or encapsulants, has always failed because these materials have to withstand the continual passing of the rollingstock wheels. The inevitable destruction from the wheel cutting and breaking of the filling material and shifting it in a longitudinal direction can often pose a greater risk to cyclists than the empty groove itself. Areas such as turnouts or curves are a “hotspot” for accidents and such simple measures are not easy to implement.

Zurich 2013, the first large-scale pilot project for velosafe tracks (‘velo’ is Swiss German for bicycle) starts. During the summer holidays, the Schwert stop in Zurich Höngg is refurbished and redesigned barrier-free. As the track were also being replaced, the VBZ used this opportunity to test a new rail system. This aimed at preventing the jamming of Velopneus (bicycle tyres) in the tracks. Over a length of 90 meters, the construction was installed with a rubber filling in the rail groove. According to the VBZ, the additional costs amounted to a total of around 415,000 Swiss francs.

That day was the beginning of a task and vision that did not end for those at SEALABLE (previously Dätwyler Sealing Technologies Deutschland GmbH). Unfortunately, the test installation of both participating suppliers did not lead to the expected result. Today, almost ten years later, with the support of Künstler Bahntechnik GmbH, that vision has been fulfilled.

The VeloGleis is a patented metal construction system that has an extruded replaceable elastomer profile. This profile fills out the open flange way groove to enable safe driving and crossing of bicycles, strollers or wheelchairs. A rail vehicle can continue to operate over the system without risk of derailment. The wheel flange compresses the filling profile into the groove chamber when crossing. After passing through, the profile returns to its original shape due to its rubber-elastic properties and closes the groove again.

The resetting force of the filling profile was chosen in such a way that it is not reached by bicycles or pedestrians weighing on it. A special rubber compound was formulated, which is resistant to mechanical loads, ensures high wear resistance of the profile. Moving the profile by passing rail vehicles is prevented by securing the profile into the surrounding mounting frame.

The metal construction mounting frame system has an easy-to-use removable section, which enables maintenance and cleaning work, and the replacement of the profile or even the reprofiling of the rails without the use of heavy construction equipment. When installed on both sides of the rail, the double-sided system enables the replacement of the complete rail without disturbing the road pavement.

The system uses common rail components and can be incorporated with special track accessories such as drainage boxes, axle counters, etc. Stray Current protection is also incorporated into the system with insulators in the fasteners as well as with the proven RCS® system. The primary focus for the use of VeloGleis is in the areas of narrow rail curves, “in road” crossings at cycleways or at tram stops and areas such as at points or turnouts.

After all the theoretical tests, simulations, and the countless prototypes, the Basel Verkehrs-Betriebe (BVB) and the Association Pro-Velo in 2019 thoroughly checked the solution relating to safety, installation, maintenance, and cost. The system was initially thoroughly tested on a private test track. Recruited cyclists tested the system with a range of different types of bicycles, e-bikes, bikes with trailers under various conditions – for example, when cyclists have to cross a rail twice, with longitudinal cars in front of the tram stop, in wet or with leaves on the road. The feedback from the test riders on the bike track was consistently positive – regardless of the cyclist’s ability, the track system proved to be well navigable and was perceived as safer when crossing the rails than tracks without rubber filling.

The first pilot installation took place in Basel, Switzerland, where 125metres of bicycle track was installed with VeloGleis. It was a challenging location with Bombardier Flexity 6/4 vehicles passing at 7½ minute intervals and, based upon previous counts, about 1080 wheel users passing through the area in 24 hour periods. A second pilot project was installed in Cologne, Germany. At the exit from a tram depot, a cycle path crossed at several locations over the narrow 32metre curves in the tracks showing again the possibilities with the VeloGleis to provide safe and legally compliant DDA crossings even at the most demanding conditions for cyclists.

Noise protection is another not-to-be-underestimated feature of the system, especially with the crossing of rubber tyred vehicles. A rail groove repeatedly generates disturbing impulse noises, considerably above the ambient environmental noise levels. As the groove is now closed with VeloGleis, the noise is drastically reduced. More detailed tests on the extent of this isolation are still in the pipeline.

The well-known problem of “in road” rail crossing of cyclists, especially at sharp angles, now has a solution to help transport operators meet the requirements of the Disability Standards, and mitigate the risks associated with conflicts between rail and wheel. VeloGleis will provide an opportunity for even more creative urban planning. It will bolster the integration of cycling into future urban environments, allowing public transport and bikes to interact equally and safely, side by side, complementing each other, a step towards reducing vehicle numbers on our road network.