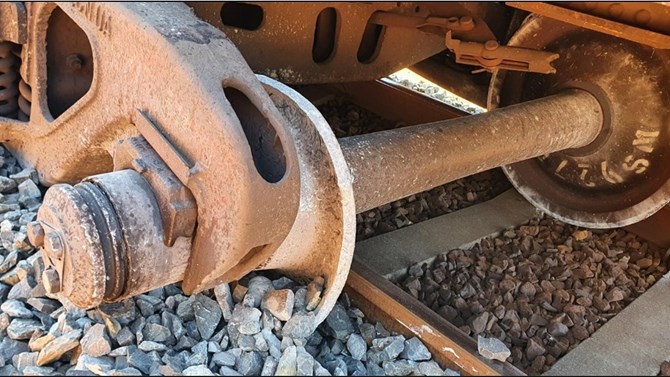 SCT Logistics train 2PM9 was on a service from Perth to Melbourne on 27 October, 2020, when a wheel on the 58th wagon in its consist fractured and disintegrated.

This resulted in derailment of the wagon and separation of the derailed wagon, and the 10 wagons trailing it, from the front of the train. No other wagons derailed, and there were no injuries.

Detailed material examination identified that, prior to the incident journey, a transverse fatigue crack had initiated in the vicinity of a spalling defect in the wheel tread.

ATSB Director Transport Safety Stuart Macleod said the crack propagated into the rim and flange of the wheel.

“On the day of the incident, a skidding event at the fatigue crack likely induced rapid brittle cracking in the wheel, resulting in fragmentation of the wheel and, subsequently, derailment of the wagon,” he said.

The wagon in question had experienced various issues with brakes and overheated wheels in the 12 months prior to the derailment, but it is not clear whether any of these issues contributed to the derailment.

The failed wheel had recently been reprofiled, but the maintenance provider’s work instruction did not require non-destructive examination beyond a visual inspection to identify any remaining defects.

“Skids and hotspots may be repairable on wheels in otherwise good condition, but they can induce wheel failure if cracks are present, as in this case,” Macleod said.

“Diligent inspections and non-destructive testing can be useful for detecting and monitoring wheel cracks, which is particularly important as these cracks approach the wheel wear condemning limit.”

Since the derailment, the operator and maintenance provider have developed a process for monitoring wagons that experience repeated issues, such as with braking.

Inspection procedures for thermal cracks and overheated wheels have been refined, and non-destructive testing is being investigated for use in certain wheel inspections.