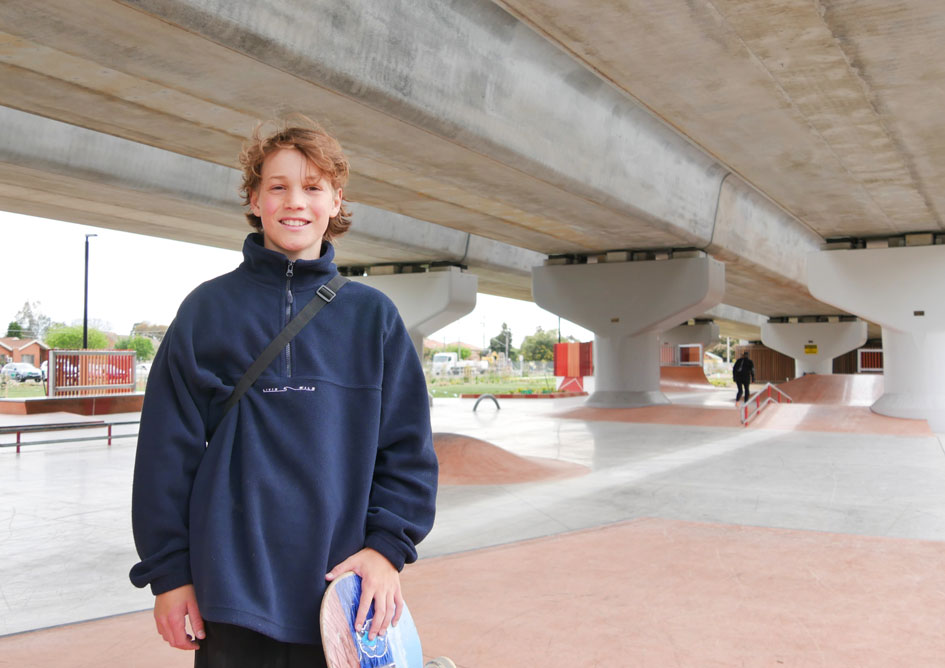 Baker Bitton at the new park.

At 13, Baker Bitton is already a skating guru. So much so that he was approached last year to help design a brand new skate park built as part of Victoria’s level crossing removal project in central Werribee.

Built amongst the rail bridge columns, and sheltered from sun and rain, this park is like no other in Melbourne. It forms part of 30,000 square metres of open space under and around a new rail bridge which now separates cars from trains.

The new build means the budding pro-skater now has a world-class skate park just minutes down the road from his home. His involvement in the park’s design is also an experience which has whetted his appetite for a future in engineering.

The end result has so far had a big thumbs up from Baker, who’s noticed a big increase in the popularity of skateboarding in the wake of the sport’s Olympic debut.

“The park has good line and good flow,” he said. “I like it all, and there are seating areas so you can chill with your mates.”

Lead designer Darren White, of Victorian-based company Baseplate, said Baker’s presentation absolutely blew him away. “He was a bit nervous at first but the minute the subject turned to skating Baker was in his element,” he said.

White said the Werribee skate park, which weaves amongst bridge columns, is unique in Melbourne – if not Australia. ‘That was our biggest challenge,’ he said. “How do you design a skate park under a bridge?”

In Baker’s view it’s the park’s unique location that turned out to be a massive drawcard.

“At first I thought the columns would be an intrusion but because they’ve been turned into obstacles they aren’t invasive at all,” he said. “It’s actually good because everyone is skating through the park, not across it.”

For his design review, Baker says he was asked to point out things to keep, things to get rid of, and any tips.  One tip – later incorporated – was a tool bench where you can put your skateboard down.

Another important thing for Baker was making sure the park catered for beginners as well as experienced skaters. “We talked about separating a couple of the ramps so that people who are new to skating can come up and give it a go,” he said.