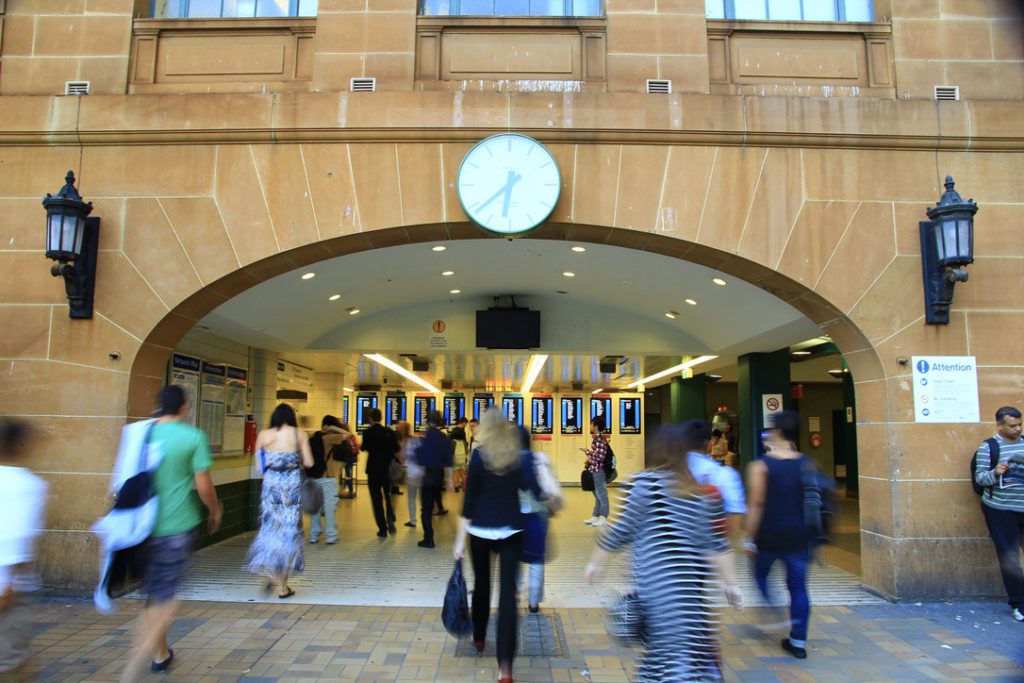 The digitalisation of the rail sector has increased safety, functionality and efficiency across networks, and information systems are no exception. Now, tm stagetec systems is taking the next step in the integration of audio and visual passenger information systems with the Smart pi ecosystem.

A lot has changed over the past decade in rail. In 2010, Sydney Trains was carrying less than 300 million trips a year, in 2019 that had increased by about a third, with over 400 million journeys. Major extensions to the Sydney network were not yet complete, with the South West Rail Link to Leppington about to begin in 2010 and Sydney Metro was still known as the on-again, off-again North West Rail Link.

For passengers, significant shifts in how they would interact with rail services were deployed in the 2010s. In NSW, the Opal card system would be introduced in 2012, with rollout completed across the rail network by 2014.

While not as visible, but arguably just as significant, in 2011, Sydney Trains began shifting its information systems to a digital public address system. Charles Chan, currently audio and visual services manager at Sydney Trains, joined what was then RailCorp just prior to the beginning of the digital announcement program, and encountered a very different type of technology.

“At that stage, at every station we had an analogue PA system however they were not linked up to anything, so if anything goes wrong, you need to go to the station to fix the system and we didn’t know what happened. Sydney Trains started to think about how we can do better, how can we improve the quality of sound announcements for our customers. So, we started to look at digital technology.”

In 2009, an internal proof of concept was developed, leading the organisation to be able to show that digital technology for information systems was much more effective than the previous analogue system. Subsequently, a tender was developed to deliver the technology and one of the successful companies was Sydney- based audio technology systems integrator tm stagetec systems (TMS).

The expertise of TMS was essential for the delivery of the digital PA system, highlighted Chan. With expertise in specialised audio systems for large and networked institutions, the company was the perfect fit for the complexity of delivering audio announcements to the Sydney Trains network.

“Because we are more on the service operational side, we collaborated together to find what service we needed, what the end user expected, and then TMS provided the technology and developed a product,” said Chan.

While TMS provided technical know-how, there were also clear requirements that Sydney Trains had set at the outset. The network had to be based on an open standard, so that the operator was not tied to any one supplier, and in addition, unlike the previous system that was localised to each station, the entire network had to be able to be managed remotely.

“It’s not possible for us to go to every station to check everyday so we want the system to know, even down to a speaker level, whether it is working or not,” said Chan.

Within these parameters, the installation of digital audio systems enabled much greater flexibility, and this would be essential for the many network upgrades that were to come. Chan cited the example of Central Station, where due to changes to the station layout, announcements had to be altered.

“With the previous analogue system, we would have to re-run all the cabling, buy all the equipment again, but now we don’t need to, we just tell the system. It’s very flexible and dynamic to meet our business and operational needs now.”

In addition, as TMS general manager Mark Lownds points out, by going digital, many other functions that would have previously been impossible are easy to implement.

“Say there’s a station that has people living close by, the central management system can implement time of day scheduling. We actually turn announcements off completely in some areas later in the evening and at night when there’s no truck noise and traffic, we turn the system down a little bit and it’s completely centralised and managed from the operational team, not just to help the customers of Sydney Trains but even the environment around them.”

With increasing urbanisation around train stations, the needs of the railway and the surrounding communities are increasingly coming up against one another, with Sydney Trains having to fulfil legislative requirements for both.

“In the past, with the analogue system you can’t control the volume, you only have a flat volume for a whole platform but nowadays, for a digital system we can,” said Chan. “According to the Disability Discrimination Act, we need to provide an announcement to the last train and to do that in the past we needed to blast out the sound across the whole platform which annoyed the neighbours. Now we don’t have to because at night, we have a special zone called ‘the night zone’ where only at night, we only make an announcement to that particular area and we are using the digital technology as well to minimise the sound required.”

To meet these requirements and other operational needs, Sydney Trains and TMS have worked together to continually improve the customer experience for those travelling on Sydney’s rail network. Today, said Chan, other agencies within the NSW Transport cluster are turning to Sydney Trains to see how they can meet the high standards of speech intelligibility and evolving needs on the Sydney and NSW Trains network.

“More than once TMS produced a product and then, I will map that product to see how we can translate that to a customer experience,” said Chan. “Sometimes we share the results from the survey report of what our customers think about us, and ask them ‘What can you do?’ Then, they’ll come up with a product to match that. During the past nine years, we have worked well together in terms of providing a high quality of audio system for our customers. We are a leader in transport cluster for audio systems.”

A MODULAR APPROACH TO DIGITAL AUDIO AND VISUAL INFORMATION SYSTEMS
With almost a decade of working with Sydney Trains under their belt, TMS are now looking at how the next wave of innovation can go further than the current digital, networked system.

This thinking has led to the Smart pi ecosystem. Working with manufacturer Smart Pi, TMS have developed a modular, networked passenger information system that can be easily customised to the demands of railway operators.

While this might seem like a significant shift from the bespoke systems of the past, the Smart pi ecosystem is built upon many of the same principles that have gone into the development of Sydney Trains’ digital information system. The first principle was that the system had to be built on an open architecture, said Lownds.

“We hired a software development company called DeusO,who were involved in building the standards for audio and video communications protocol Open Control Architecture (OCA). With OCA we’re not just using it externally, we’re using the same protocol internally, even in the same device when we need to hand over information internally. It’s a big decision and investment to do it this way but it meant that we can be completely open, completely standard compliant and pretty fast to market,” said Lownds.

An advantage of using the OCA, said TMS managing director Treva Head, was that it enabled the second principle that the Smart pi ecosystem is built upon; scalability.

“Why we decided to use OCA is because it’s scalable and it’s transport agnostic, so you could use it over TCP/IP or USB or WiFi or whatever you want to use it with. So, we’ve made sure that we can scale from very small to very big.”

The final principle in developing the system was reliability. With their experience delivering audio technology for rail networks, TMS knew that conditions are not always ideal, therefore aimed to limit the load that the technology would place on the network. This has been confirmed in the in-house testing process.

“Because we’re trying to test, prove and repair problems,” said Lownds, “the test server here is actually a Microsoft Surface connected via WiFi as we wanted to prove it will work even in a simple environment.”

Head added that the effectiveness of using a small device highlighted the system’s reliability.

“We want to make sure the code is efficient as well. We’re importing all the data and distributing it but we only send updates when we need to send updates, so network traffic is reduced.”

The other side of this principle is ensuring that if a system does fail, there’s a backup, this can be achieved through in-built redundancy, said Lownds.

“If you’ve got a small system, say you just want a clock, you can just run that off one server, no problems, but if you wanted a redundant clock, we have the option to cluster the database and then run two servers and automatically fail over between the two. The units in the field don’t even know when something changes, they just connect, they don’t care if they’re on the primary or secondary one, they just connect.”

INTEGRATED CUSTOMER INFORMATION SYSTEMS
Building on the experience of rolling out digital announcements across the Sydney Trains network, TMS are using this experience to enable connections between various components of the audio and video technology that customers use when travelling across the network.

One example is the integration of help or information points with the digital announcement systems.

“We can have multiple buttons and the second button could be for information,” said Lownds. “It knows where you are so it can talk to our voice announcement system and tell you when the next train is coming and where it’s stopping, automatically.”

Being an integrated system also enables announcements that are made live to be fed back into the control centre, allowing for review and standardisation, said Head.

“You’ve got the customer asking, ‘How can we improve the actual making of the announcements?’ Sometimes it’s manually typed, sometimes it’s pre- recorded and sometimes it’s live, and we need to make sure that there’s a common experience. We built an audio logger system so if they need to go back and look at it the system is set up to subscribe to all of these audio channels, log it, and save the metadata of when it was, where it was and to transcribe it.”

The modular nature of the Smart pi ecosystem also means that other systems can be added into the overall network, even beyond traditional audio and video services. One function of the Smart pi Eye digital information board is wayfinding functions integrated with physical station infrastructure such as escalators.

“If you’re busy at three o’clock in the afternoon because people are going to the train station to get home you might have two escalators going down and one going up, and in the morning, it might be the opposite. If you’ve got digital signage, Smart pi Eye can integrate with the escalator and flip what’s being displayed,” said Lownds.

With the basis in open architecture, scalability, and reliability, there is the potential for further uses to be integrated with the Smart pi ecosystem, based on the needs of the individual transport operators.

“It’s a nice feeling when the customer comes to you and says, ‘I’d like to be able to do this,’ and you’ve already done it or it’s really easily done because we put so much work into how all the components are going to talk to each other from the ground up,” said Head.