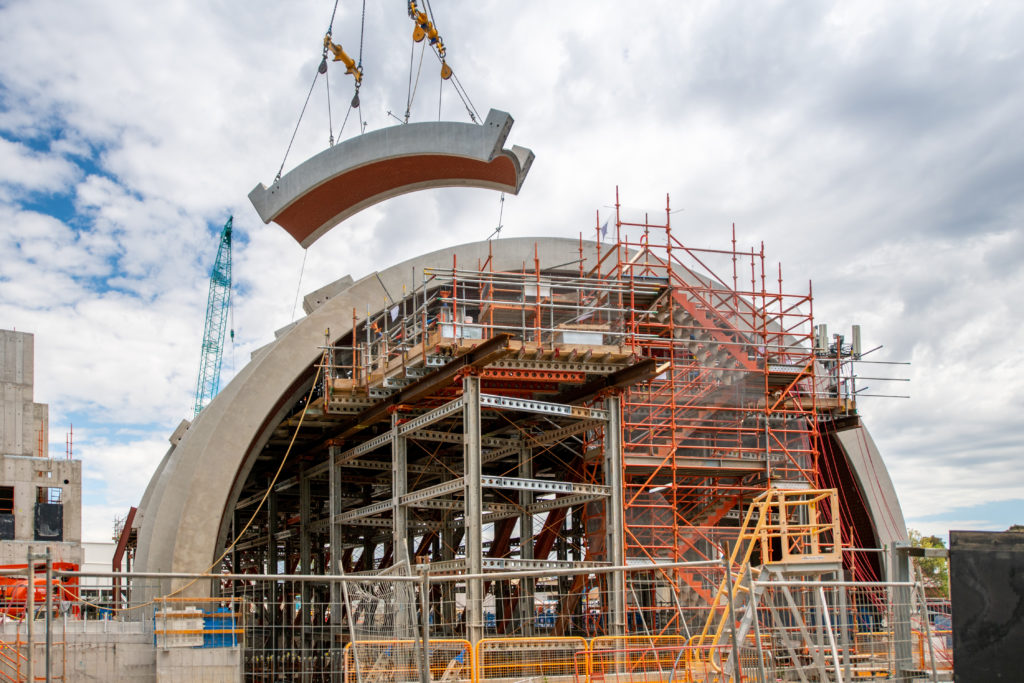 Workers are completing the delicate job of guiding 60-tonne concrete and brick arch segments into place to create the soaring entrance for the new Arden Station, part of Melbourne’s Metro Tunnel Project.

The process began in June with the installation of seven support columns, followed by the construction of a temporary steel frame to provide support to the arches as they are lowered into place.

The first of the arches – designed to reflect North Melbourne’s rich industrial history – was installed in mid-October using a 350-tonne crane. The work is expected to be completed by the end of the year.

The 15 arches are made from precast concrete lined with more than 100,000 bricks, each one laid by hand. They are made up of 45 individual segments, each weighing up to 60 tonnes. 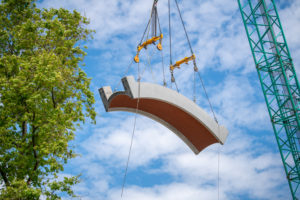 The arches were built using Victorian bricks at a precast facility in South Australia – the only Australian business of its kind with the capacity to undertake such logistically challenging work. They are being trucked into the site on flat-bed trailers. Once in place, the arches will rise up to 15 metres above people as they enter the station from Laurens Street.

Construction is also progressing well underground, with the final concrete pours for the station’s platform surfaces almost complete. In the tunnels between Arden and the State Library Station sites, workers are pouring concrete for the tunnel floor slab and installing equipment such as cable brackets and trays as part of rail tunnel fitout.

The station’s services building is being fitted out internally with walls and mechanical, electrical and plumbing systems. Work continues on collar beams – the concrete structures connecting the edge of the tunnel to the station box – at the station’s eastern end.

The station will be the first destination for Metro Tunnel passengers coming from the west on the Sunbury line and a centrepiece of the planned Arden Precinct – expected to include up to 34,000 jobs and be home to around 15,000 residents by 2050.

When finished, the Metro Tunnel will create capacity for more than half a million additional passengers a week during peak times across Melbourne’s train network and provide a future direct link to Melbourne Airport Rail.

Premier Daniel Andrews said the Metro Tunnel team had been working around the clock in 2021 despite the challenges of the pandemic, keeping thousands of Victorians in jobs as the state works towards opening a year ahead of schedule in 2025.