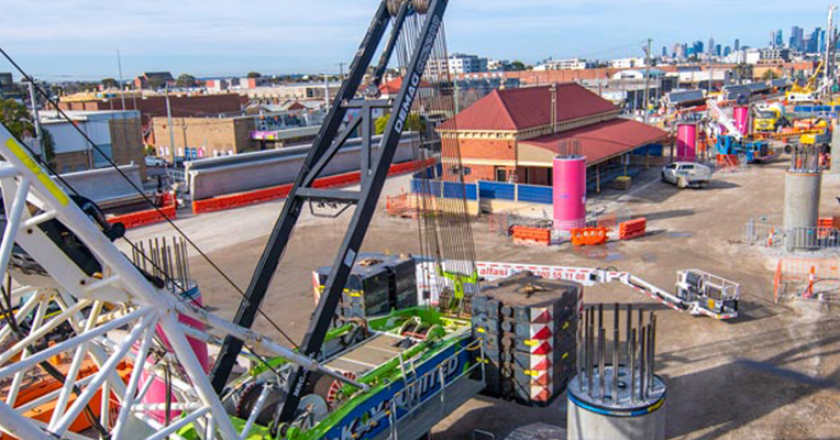 Works to remove level crossings on three lines through Melbourne will step up during spring, as work continues on transport infrastructure projects around Melbourne.

Fifteen level crossing projects are taking their next step in September. On the Upfield line, removals of four level crossings are underway along with the construction of two new stations.

On the Cranbourne line, duplication works will see buses replace trains from September 8-13. Four level crossings on that line are also set to go, getting it closer to being the first level crossing free line in Melbourne.

Sunbury line works are scheduled for November to enable the line to carry newer trains once the Metro Tunnel opens. These works involve track, power, and platform upgrades and will require a shutdown on the line from November 7-22 and on the Bendigo line from 7 to 21.

For the trains themselves, safety and performance testing of the new High Capacity Metro Trains will be conducted on the Werribee Line from late August

On the Metro Tunnel project, all four tunnel boring machines are in action and the twin tunnels are getting closer to completion.

The tram network will also benefit from maintenance works. Upgrades will be carried out in Malvern, South Melbourne, Parkville, and Pascoe Vale South. Tram stabling in East Melbourne will also be improved, to allow for more trams during special events.

Minister for Transport Infrastructure Jacinta Allan said the works will have a wider benefit.

“These critical projects are building a better transport system, while supporting local jobs and Victoria’s economy,” she said.

Across all projects, tight hygiene controls are in place under Melbourne’s stage four restrictions and workforce numbers have been reduced.

“The safety of our workforce and the community is our priority – we are taking strict precautions to ensure our critical transport infrastructure projects can safely continue under coronavirus restrictions,” said Allan.