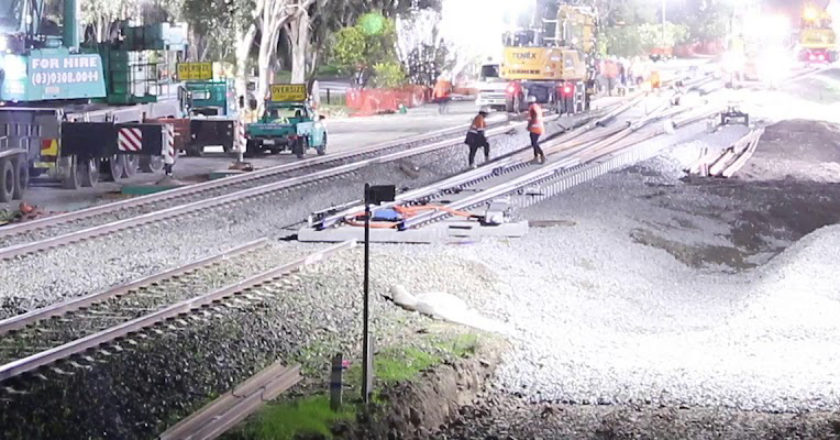 Repairs to the North East Rail Line around Wallan were completed on Friday 28 February, with the first Melbourne-Brisbane freight service passing through at 2.50am Friday morning.

The Australian Rail Track Corporation (ARTC) will be implementing an interim 80 km/h speed limit on the line between Melbourne and Albury for all passenger and freight services.

The Office of the National Rail Safety Regulator (ONRSR) has written to the corporation to request an additional independent review focused on track condition, which the ARTC said in a statement “we understand and support”.

ARTC senior managers will ride in the cabs of freight and passenger trains between Albury and Melbourne through this week in order to assess the ride condition from the locomotive cab and to engage with train drivers.

“While this is something our management does regularly, it is even more important at this time,” Fullerton said.

Fullerton is calling on any members of the community who have knowledge of, or saw suspicious behaviour between Wallan and Donnybrook before 1am on Saturday 29th February to contact Crime Stoppers.

More than 2.4km of copper signalling wire was stolen by thieves between Wallan and Donnybrook in the early hours of Saturday morning, which resulted in 60-90-minute delays to all rail services.

Fullerton said it is disheartening that thieves would seek to take advantage of such a situation.

Between July 2017 to July 2019 there were 231 incidents of copper line wire theft along the ARTC rail corridor between Craigieburn in Victoria and Sydney.

This has resulted in hard costs of around $600,000 in rectification, but further cost and impacts via significant delays to train services, call out time for staff responding, additional driver and staffing hours, late freight deliveries, and costs to passenger customer time.

From these incidents, ARTC reported that 77 per cent resulted in train delays to the network.

ARTC stated that the focused area of theft in Victoria is between Craigieburn in Melbourne’s north to Chiltern, south of the VIC/NSW border.

52 per cent of the incidents occurred within a roughly 40km stretch of track north of Melbourne according to the ARTC.

“In addition, a targeted track tamping program has been operating since October 2019 and 130km of tamping has been completed. Two track tamping machines are stationed in North East Victoria for ongoing use, achieving an average of around 5km of track tamping per day,” an ARTC spokesperson said.

In addition to conducting repairs, ARTC have been assisting investigations into the XPT Wallan derailment that were launched by the Victorian Coroner, ATSB and the ONRSR.