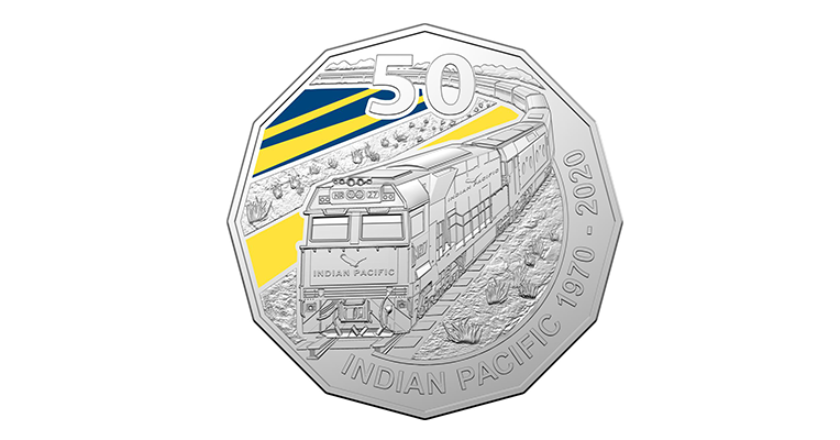 Australian rail has been commemorated in a special edition coin.

The Royal Australian Mint has issued a new, coloured 50 cent coin with the Indian Pacific detailed on the reverse of the 50 cent piece.

The coin celebrates 50 years of the train’s service, which connects two oceans and crosses a continent, travelling from Sydney to Perth.

Now operated by Journey Beyond, when the service was first launched on February 23, 1970, it was a joint operation between the Department of Railways New South Wales, South Australian Railways, Commonwealth Railways, and Western Australian Government Railways. In February 1993 Australian national took over the service.

Since its first service, the transcontinental service now carries roughly 80,000 passengers a year.

“The Royal Australian Mint is delighted to share this unique limited edition coin that celebrates another of Australia’s world famous railway journeys, a story which will resonate with the Australian public, train lovers, coin collectors and fans of the iconic Indian Pacific itself,” he said.

The possibility of having one service travel the 4,352km between Sydney and Perth was enabled by the east-west standard gauge project. Previously, travellers would have had to change trains six times, limiting the rail connectivity of Australia.

Journey Beyond’s chief commercial officer, Peter Egglestone, noted how the train journey showcases the best of what Australia has to offer.

“The Indian Pacific is a truly transcontinental rail adventure that journeys across the Nullarbor, through mountain ranges and rocky valleys and across arid deserts.  The inaugural journey nearly 50 years ago was a significant achievement, which has now developed into the all-inclusive guest experience today with regionally-inspired food and wine, world-class service and off train excursions.”