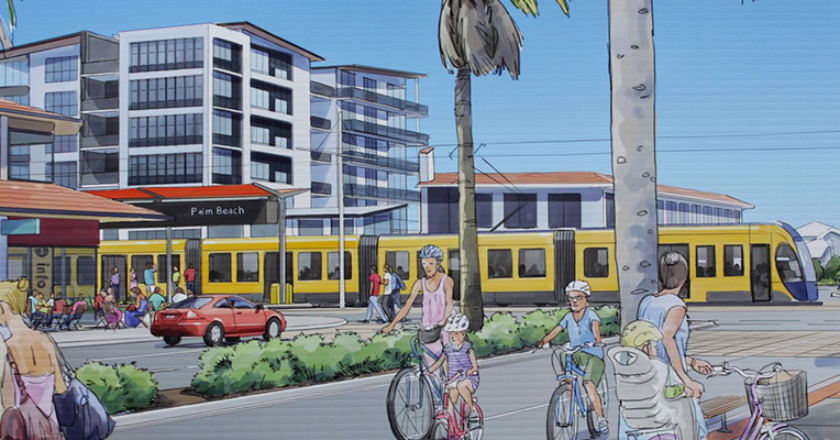 The proposed alignment will not conflict with the preserved heavy rail corridor to the airport, said Queensland Minister for Transport and Main Roads, Mark Bailey.

“The current preserved width of the heavy rail corridor next to the M1 means we can’t accommodate future extensions of both light rail and heavy rail along that route,” said Bailey.

“Directing light rail along the highway protects the M1 rail corridor for its principal use as a future heavy rail connection to the airport.”

Queensland Premier, Annastacia Palaszczuk announced the plan for the future extension of the light rail at Gold Coast Airport on Saturday, March 7.

“Connecting light rail to the airport is also really important for a 2032 Olympics bid.”

While the final details of the route alignment are not confirmed, Bailey indicated that running the light rail down the highway would allow for greater patronage.

“This is great news confirming what we already knew and what the community has told us they want,” he said.

“Congratulations to the State Government for undertaking this work now so that detailed planning can get underway as soon as possible.”

The proposed route alignment will be subject to community consultations. Previous suggestions that the light rail would pass through Palm Beach attracted community opposition.

CEO of Queensland Airports Limited, Chris Mills, highlighted that the route identified in the study is supported by the operator of the airport.

“We have long advocated for the light rail to the airport and our preference has been for it to follow the Gold Coast Highway. We are pleased to hear that is the direction that has been recommended by this study,” he said.

“About 6.5 million people come through Gold Coast Airport each year and the vast percentage are leisure travellers, so we need an efficient and easy public transport linkage that accommodates visitors to the city and local residents well into the future.”