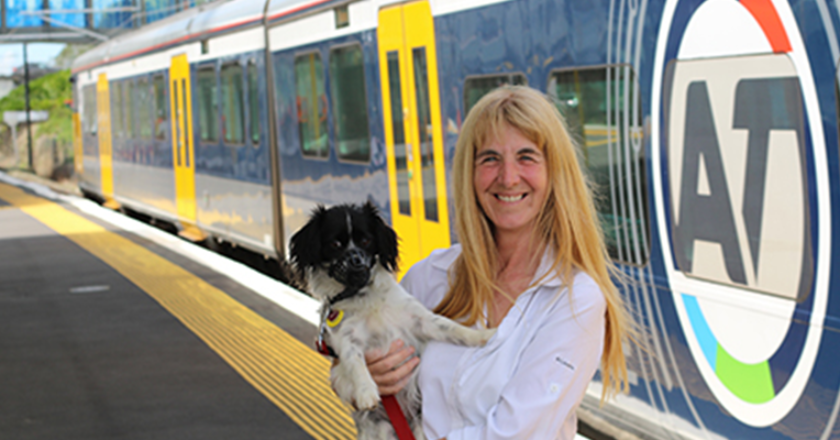 Pets can now travel on trains in Auckland.

The move follows two trials and a survey of passengers. Only 12 per cent of people opposed having pets on trains.

Pets can travel outside of the peaks on weekdays, from 9am to 3pm and after 6.30pm. On weekends and public holidays pets can travel all day. Dogs must wear a muzzle and lead or travel in an approved pet carrier.

“Our customers have really enjoyed being able to take their fur companions on the trains. Pet owners have been very supportive of the protocols that have been put in place to allow this initiative to happen.”

Auckland councillor Cathy Casey has been advocating for the change.

“This is another fantastic step towards making Auckland a more dog friendly city. We are finally catching up with the great cities of Europe where pets are welcomed on all forms of public transport.”

In Europe, many cities allow animals on public transport, with varying restrictions. Pets are often charged a concession or child price. In Zurich, dog owners can purchase an annual travel pass.

In contrast, most cities in the US do not allow pets to travel on public transport.

In Australia, pet owners are sometimes allowed to bring their companions with them on public transport. In Victoria, dogs can travel on trains but must be on a lead and wear a muzzle, and smaller animals can travel in an animal container.

In Queensland and Western Australia dogs are not allowed on trains.

Guide dogs are allowed to travel in all jurisdictions.