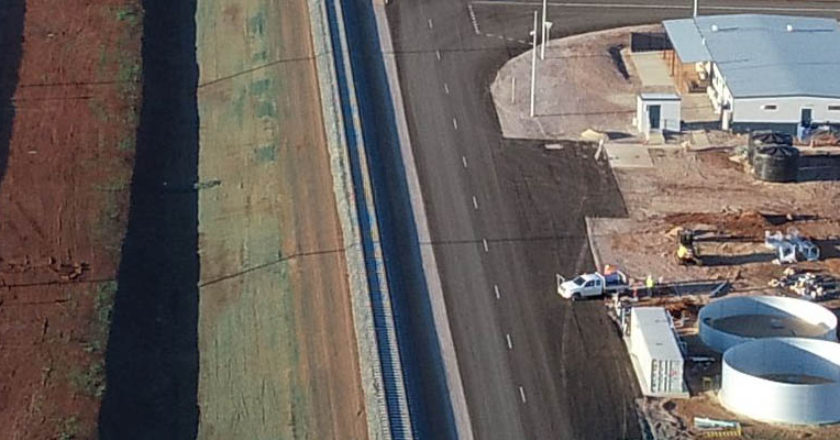 Construction is wrapping up on Pacific National’s Parkes Logistics Terminal, with the official opening of the intermodal freight terminal taking place on Wednesday, 30 October.

The terminal is located at the intersection of the main western railway line running from Sydney to Perth, the North South Newell Highway and, once it is up and running, the Inland Rail corridor from Melbourne to Brisbane.

Construction of Pacific National’s terminal began in October 2018 after the company committed an initial $35 million to develop the terminal within the National Logistics Hub and acquire rollingstock-like freight wagons.

The National Logistics Hub forms one of the NSW government’s Special Activation Precincts, as outlined in its 20-Year Economic Vision for Regional NSW. Parkes will be the first of the precincts, which are infrastructure projects in regional locations across NSW.  They are intended to stimulate the local economy and provide more local employment opportunities.

The precincts will be funded through the $4.2 billion Snowy Hydro Legacy Fund, which was established following the sale of the Snowy Hydro Scheme to the Commonwealth.

As well as creating jobs in the freight and logistics industry, the National Logistics Hub at Parkes will optimise opportunities in agriculture and exportation.

“Pacific National’s terminal will consolidate hundreds of thousands of cargo containers, including boxes filled with regional commodities destined for overseas markets, to be hauled by rail across the length and breadth of Australia,” said Pacific National chief executive Dean Dalla Valle.

“Once the Melbourne to Brisbane Inland Rail project is complete, regional enterprises can use Parkes as the launching pad to haul goods and commodities by rail more efficiently between the ports of Botany, Brisbane, Melbourne and Fremantle,” said Dalla Valle.

“If a freight train delayed by congestion misses a loading window for containers at Port Botany, then exporters suffer financial penalties and a loss of goodwill with clients.”

Pacific National estimates for every 1000 shipping containers gravitating to ports in Victoria and Queensland, up to 10 jobs in NSW are lost.

“The NSW Government needs to be acutely aware of these future competitive dynamics,” said Dalla Valle.