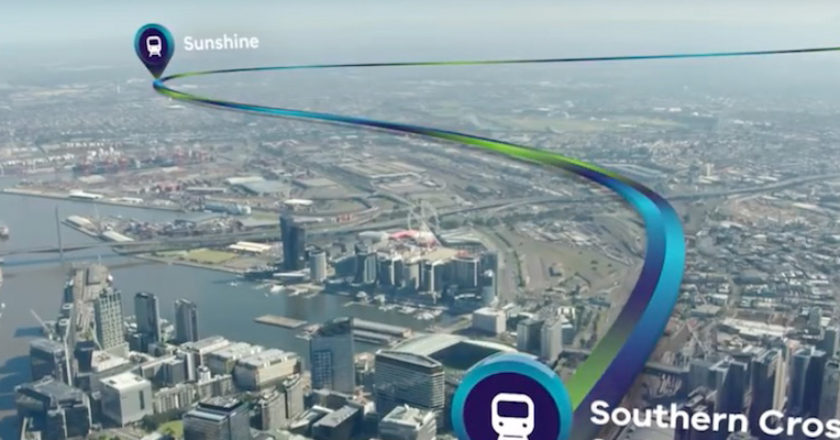 A private consortium involving Melbourne Airport and Metro trains are offering to invest an extra $2 billion to build a dedicated track from the CBD to Melbourne’s West as part of the airport rail project.

IFM Investors, a fund manager owned by 27 superannuation funds, as part of the AirRail consortium are proposing to build a 6km tunnel between Melbourne and Sunshine, 12km west of Melbourne’s CBD.

IFM Investors have written to the Victorian and federal government on Thursday last week to offer a further $2 billion investment on top of the $5bn initially proposed in 2018.

IFM are proposing a market-led solution to the new track, calling for a new rail tunnel in a letter sent to Victorian Premier Daniel Andrews and Prime Minister Scott Morrison.

“A project option that includes a tunnel between the CBD and Sunshine delivers the best airport rail solution particularly when compared with a MARL that utilises the Melbourne Metro Project,” wrote IFM.

The Age reported that federal and Victorian government plans for an airport rail line will involve a route via the Metro Tunnel to Sunshine, with a new track to be built between Tullamarine and Sunshine.

In 2016 a Metro Tunnel business case rejected a 2012 Public Transport Victoria plan to run airport trains through the $11bn metro tunnel, currently under construction until 2025.

The federal and Victorian state governments had previously agreed to a $10bn joint commitment to the Melbourne airport rail link.

A Victorian government spokesperson said in May last year that part of the budget also includes additional tracks between Sunshine and the CBD that would be part of Melbourne Airport Rail Link.

Every airport rail option being assessed would include a stop at Sunshine to connect to Geelong, Ballarat, and Bendigo services, according to a Victorian government spokeswoman.

The AirRail consortium, that also includes Metro Trains, Southern Cross Station, and Melbourne Airport will request that the State Government is charged a toll every time a Metro or V/LIne train runs through the new rail tunnel for operating and maintenance purposes.

IFM says it wants to operate the tunnel over a 40-year concession period.

According to the letter, the access payment from regional trains that use the tunnel would recoup an appropriate share of the significant capital cost of building the tunnel.

IFM have stated they do not wish to constrain regional or metro services due to frequent airport trains and decisions on service, pricing, and timetabling would remain wholly with the Victorian government.

AirRail Melbourne has been ready to commence construction on the infrastructure project since 2019 and IFM is waiting for the green light to start the build. Australian rail suppliers have also contacted IFM to propose their interest as potential contractors for the project.

In June 2019 the Victorian government announced that Rail Projects Victoria (RPV) will be developing a detailed business case for Melbourne Airport Rail.

The Victorian state Government said the business case will be delivered by 2020 and will assess station and procurement options, value capture and creation opportunities, and economic analysis of the recommended solution.

AirRail Melbourne proposed in a 2018 blueprint that 20-minute travel times will be expected to the city, using dedicated rollingstock.

“Our ambition is to have a train journey to the airport from the city that is fast, affordable and meets the needs of travellers,” a spokesperson for federal Minister for Urban Infrastructure Alan Tudge was quoted by The Age last year.