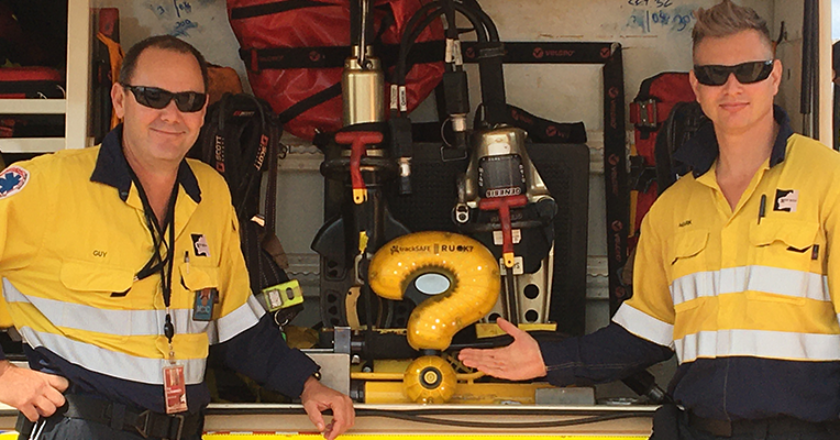 Rail R U OK?Day has been marked by rail organisations around Australia and New Zealand, with engagement reaching all-time highs.

On April 30, for the sixth year running, those within the rail industry reached out to their colleagues, co-workers, and friends to ask, “Are you ok?”

While traditional face-to-face get-togethers have been limited due to physical distancing measures in place to keep people safe due to coronavirus (COVID-19), numerous organisations still encouraged employees to pick up the phone or jump on a video call to check in on each other.

South Australian Public Transport Authority executive director, Anne Alford, said that Rail R U OK?Day in 2020 was the most significant yet.

“It’s now more important than ever that we promote a sense of community, reach out and ask our friends, family and workmates and ask, ‘Are you ok?” said Alford.

In Melbourne, Metro Trains driver Stephen King said that the simple action of asking a colleague how they are going can make a significant impact.

“To be able to just ask and check in on somebody to see how they’re going can make all the difference.”

Train drivers, station staff and the wider rail industry are often the first witnesses or respondents to traumatic incidents that occur on the rail network, leading to a focus on mental health within the industry.

“On any given day, at any given time, we’re prepared for any incident – whether it’s an accident or a trespasser. There are also things that happen away from the job that can affect us as drivers,” said King.

“There is a fair bit of stress and pressure that goes with the job for sure.”

In Queensland, Queensland Rail set a Wellbeing Conversation Challenge to encourage their team to check in on their workmates. Sydney Trains also encouraged employees to get involved in the conversation challenge.

“The virtual conversation challenge saw employees across Sydney Trains engage with each other by sharing videos and posts on our internal communication channels, and nominating others to take up the challenge,” said a Sydney Trains spokesperson.

KiwiRail similarly looked to virtual methods to get colleagues to check in on each other.

“As we continue to be in lockdown due to COVID-19, we used our staff closed FaceBook group to share the message. More than 1,600 staff belong to this group and use the page as a discussion and information sharing forum,” said KiwiRail group general manager human resources Andrew Norton.

Rail R U OK?Day is facilitated in collaboration between TrackSAFE and harm prevention charity R U OK?. Participation numbers are still being confirmed, but across Australia and New Zealand, over 75,000 people participated, surpassing previous years’ figures. Bob Herbert, chairman of TrackSAFE, said that each year leads to more ongoing conversations that last throughout the year.

“We keep hearing numerous anecdotal accounts whereby a rail employee has trusted their instinct and noticed the signs that someone near them has been struggling, and we’re thrilled to learn that they have started a conversation that has put that person on a whole new path.”

Katherine Newton, CEO of R U OK? Said that the event showed how the rail industry can work together to address challenges such as mental health and wellbeing.

“Our partnership with TrackSAFE is one R U OK? is extremely proud of and is a brilliant example of an entire industry being committed to the R U OK? Movement,” said Newton.

“Participation in Rail R U OK?Day has grown more than 800% since the inaugural event in 2015, as we see, rail employees from across Australia and New Zealand are transforming their workplaces into strong and resilient environments every day of the year.”