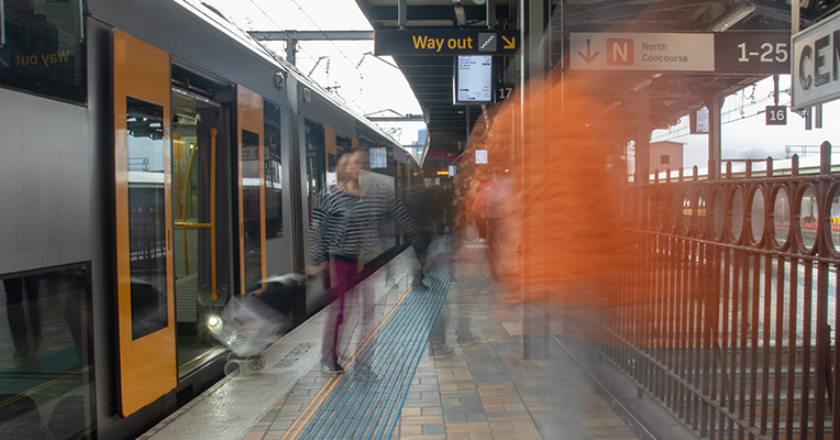 Sydney Trains has a new team who will be monitoring CCTV and passenger data to reduce crowding on the network.

Minister for Transport and Roads Andrew Constance announced the new team, which will encourage physical distancing on the transport network.

“This dedicated team of 80 people will be the ‘eyes and ears’ of the Sydney Trains network. Every day teams will monitor 11,000 CCTV cameras and utilise new real time app technology to monitor patronage numbers and help facilitate physical distancing across the rail network,” he said.

Transport for NSW secretary Rodd Staples said that the new team is in addition to preventative measures on platforms and in carriages.

“Last week we launched the ‘No Dot, No Spot’ campaign to help customers physically distance and there has been an extra 132,000 hours of cleaning since March, with regular deep cleans and hand sanitiser units being rolled at 163 staffed stations,” said Staples.

The NSW government has been encouraging commuters to stay off public transport unless they must use it, and has announced pop-up carparks and cycle lanes to facilitate alternative travel arrangements.

Although patronage levels remain low, there have been some increases as restrictions begin to lift. Trains are limited to carrying 32 per cent of their regular capacity.

Sydney Trains chief customer officer Suzanne Holden said that the new team would trial innovative approaches based on data collected around the network.

“I could not be more proud to lead a team of people who have spent long hours innovating and finding solutions to transport problems we have never experienced in our lifetimes. New features we have created for loading data technology and this new pilot program is setting the standard for the rest of the country.” 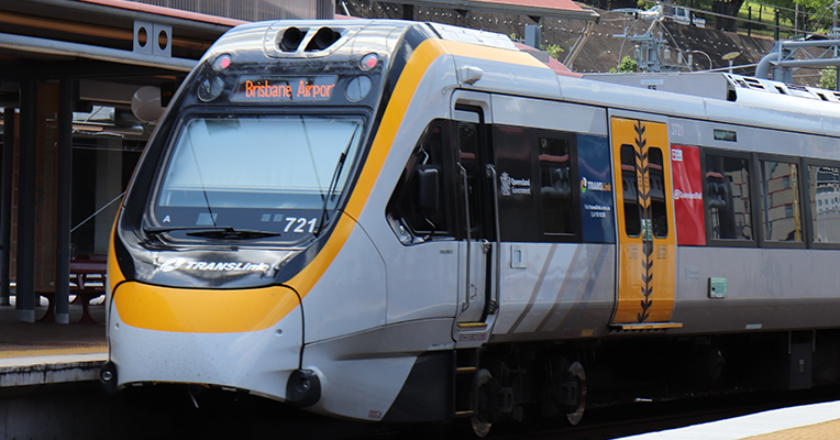 While official advice in Australia and New Zealand is to now limit all non-essential travel, authorities across both countries have prioritised keeping passenger rail services running to ensure that front-line health workers and other critical staff can get to work.

“People will still have access to long distance passenger services for essential reasons on all key corridors, but the frequency of those services will be reduced, and we’ll manage passenger numbers on board to separate passengers from each other.”

Services which largely cater to tourists have been cancelled, including the Spirit of the Outback (Brisbane to Longreach), Westlander (Brisbane to Charleville), and Inlander (Townsville to Mount Isa). Additionally, The Savannahlander, Gulflander, and Kuranda Scenic Railway have also been suspended.

There will be no impact on freight services that use these lines.

Passenger services along Queensland’s east coast from Brisbane to Cairns will be reduced by 50 per cent.

Bailey noted that these measures will be temporary.

“These are temporary measures, but they are critical to curbing the spread of COVID-19 into our rural and regional communities.”

These measures have followed a fall in patronage of up to 60 per cent in Queensland.

Other jurisdictions have also seen large falls in passenger numbers, with a 40-45 per cent decline in NSW in the past two weeks. This drop has in some ways allowed for services to continue, as social distancing can be practiced.

“It is no surprise to anyone that customer numbers are down across our trains, buses, ferries and light rail due to the Coronavirus outbreak, however importantly this has created sufficient space on all modes to allow our customers to socially distance themselves in the majority of cases,” said Transport for NSW secretary, Rodd Staples. 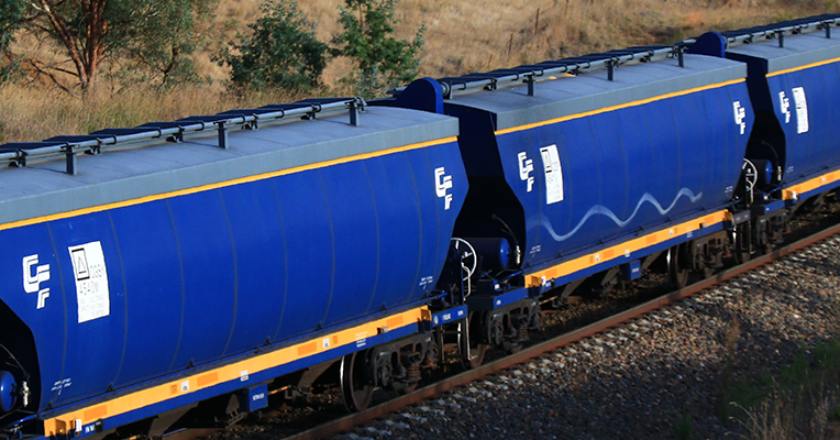 The Australian rail sector is calling for a clear statement from governments that rail freight is an “essential service” and can continue to operate despite coronavirus (COVID-19) shutdowns.

“With state borders around the country closing, rail freight is more important than ever. It needs to be clear that essential services such as rail freight movements can continue during this time,” said CEO of the Australasian Railway Association (ARA), Caroline Wilkie.

The Australian Logistics Council (ALC) also reiterated the need for governments to take a definitive position on the status of rail freight.

“It would be helpful if governments at all levels reinforced this point in their communications and made it clear that freight operations will not be impeded by border closures,” said ALC CEO, Kirk Coningham.

The statement follows border closures in Queensland, Western Australia, South Australia, and the Northern Territory and shutdowns of “non-essential services” in NSW and Victoria.

In some cases, the demand for rail freight is increasing, as Matthew Roberts, rollingstock operations manager at CFCL Australia (CFCLA) highlighted.

“Our assets and maintenance workshops are running as normal ensuring the servicing, maintenance and continuation of rebuilds of rollingstock for rail operators and other rail freight shippers continues. The CFCLA leasing business is also working with customers to increase the supply of locomotives and wagons in service in some areas.”

However, as supermarkets, pharmacies, and other retail stores remain open, rail freight is required to keep supply chains moving.

“ALC’s conversations with governments and regulators at federal and state/territory level have been focussed on ensuring freight and logistics across all transport modes remain classified as an essential service. So far, that advice is being accepted, and as a result, our supply chains are continuing to function,” said Coningham.

To date, freight is yet to be told to reduce services.

“The COVID-19 situation is unlike anything we have faced, but rail freight is providing the backbone to our nation’s supply chain during these challenging times. Our members are keeping freight moving, ensuring that essential goods such as canned food, toilet paper and cleaning products continue to get to where they need to be,” said Wilkie.

Transport for NSW secretary, Rodd Staples, said that the agency will work to ensure freight continues in NSW.

“A key part of our role is ensuring goods and services are able to get to where they are needed most, including supermarkets. The team is continuing to work closely with the freight industry to ensure we don’t see any barriers emerge in critical supply chains, across roads, ports and rail.”

While curfews have been lifted for road freight to supply supermarkets and stores that have had to deal with panic buying, curfews still apply to rail freight movements. Additionally, as passenger demand drops, there is the potential for increased freight movements.

“We appreciate the need to keep critical passenger train services moving in our cities but if we see a reduction in passenger services on metropolitan networks, rail freight access should be increased to these networks to facilitate the transport of essential goods. This could include modifications to current curfews to increase frequency and availability of freight services,” said Wilkie.

Coningham also highlighted that the seamless movement of goods is critical at this time.

“Our supply chains cannot afford to have rail freight being delayed at check points for hours if we want to keep essential goods flowing. The health and welfare of Australian communities needs to be our priority – and in order to ensure it,  we have to keep food, clothing and medicines moving to the places they need to go.”

Rail freight operators are ensuring that they are able to provide a safe and reliable service to customers by increasing cleaning procedures.

“To mitigate the potential person to person contamination risk, workshop crews are being split into small teams and working hours are staggered with crews running two shifts instead of the normal day shift reducing person to person contact as far as possible. Cleaning of workshops has increased each day and between shifts and importantly cleaning locomotive cabs has been stepped up further as they pass through for servicing,” said Roberts.

“CFCLA is taking seriously the supply of goods and services necessary to the freight sector with the health and wellbeing of all Australians being paramount.” 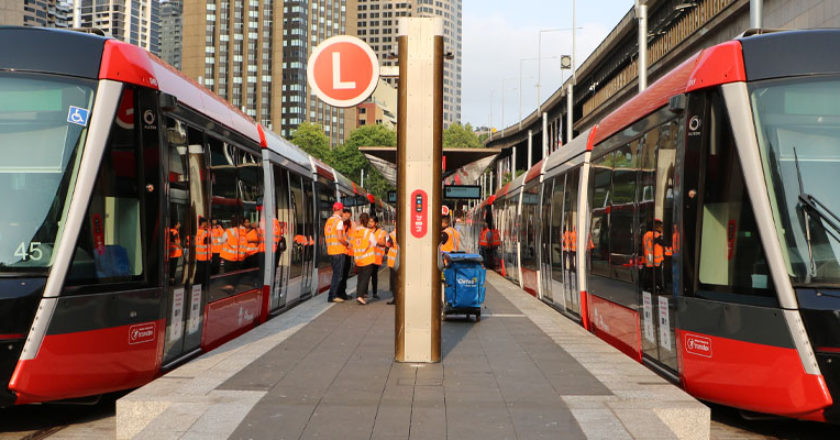 Rail Express was in attendance to travel on the first tram down George Street, Sydney CBD’s main boulevard, since trams last travelled the route in 1958.

By Sunday afternoon 115,000 customers had used the service which operated on average every 6-8 minutes, according to Transport for NSW. These patronage figures are about three times the daily patronage of the Inner West Light Rail.

“The trams should never have been taken out! So we’ve put them back in, but there’s no footboards on this one, so there’s no riding them on the side,” minister for transport Andrew Constance said.

Frank Ayrton, who had worked as a conductor on the old network which was ripped up by 1961, was among the the first to ride the first service down George Street, alongside Constance, Berejiklian and Moore.

He told Rail Express his job included walking along the outside of the trams to collect fares from those riding on the footboards.

“One hand was for the money, the other hand for the tickets and all you had to hang on with was your elbow,” Ayrton said.

Berejiklian took the opportunity to address the delays to the project: “I just want to say to everyone in the community:  thank you for your patience. The people of NSW, whether you live, work or come to visit Sydney, you’ve been extremely patient with us, so thank you.”

“Literally thousands of men and women have spent many hours assiduously over the years to make this a reality, they’ve started a major network and made a network which is changing our city and transforming our state, and I’m excited to see the light rail form a broader part of our transport network. The young people here today they’ll grow up knowing that we had a city that’s integrated, that’s modern, that’s looking to the future,” Berejiklian said on Saturday morning.

“The city has been a construction zone over the last couple of years…and something that you won’t know though is that during construction, I found out that we had a secret helper. Gladys’s father, Mr Berejiklian, would quite often go into the city and find a construction zone and talk to the workers, and then report back to the premier about how things were really going,” Constance joked.

The 60 LRVs will be able to move up to 13,500 commuters per hour (6,750 in each direction) during peak times once fully operational, according to Alstom.

As part of the contract, the consortium has also taken over the operations and maintenance of the existing Inner West Light rail (IWLR) that connects Sydney’s inner west with the Pyrmont peninsula, Darling Harbour and the southern CBD.

“This new Light Rail system will transform Sydney and provide a step change in the city’s public transport capability and reliability while protecting the aesthetic appeal of the CBD and improving sustainability of the overall transport network,” managing director for Alstom in Australia & New Zealand Mark Coxon said.

Opening day issues included a driver braking suddenly, with one man falling down on the packed tram. The service was briefly delayed while the driver was replaced.  A tram also lost power later in the afternoon, which necessitated all trams be stopped for thirty minutes.

In response, ALTRAC held a conference in the afternoon to address the issues, saying additional customer resource officers were deployed on the ground, stops were being monitored on CCTV and crowd management crews, heavy tows and police were stationed throughout the network.

“Tram failures do occur, it’s reality, but it has been an outstanding success today.”

More than 200,000 km of testing has been carried out on the line during testing while the 100 drivers have each undertaken 190 hours of training, however introducing customers on real journeys presents different challenges.

As capacity grows on the network and customers become more accustomed to the system, journey times will further improve as the L3 Kingsford Line opening approaches in March 2020, according to the state government. 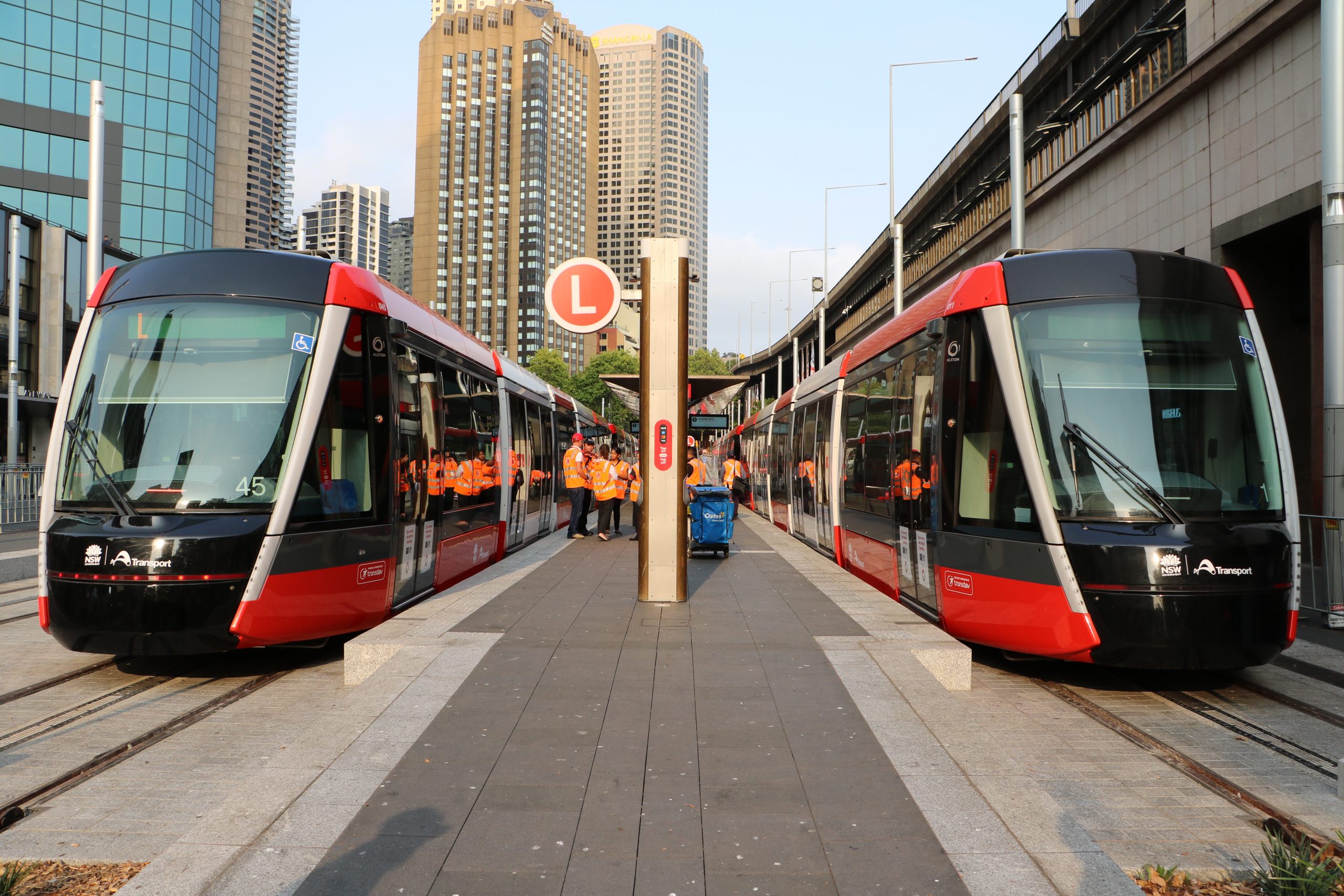 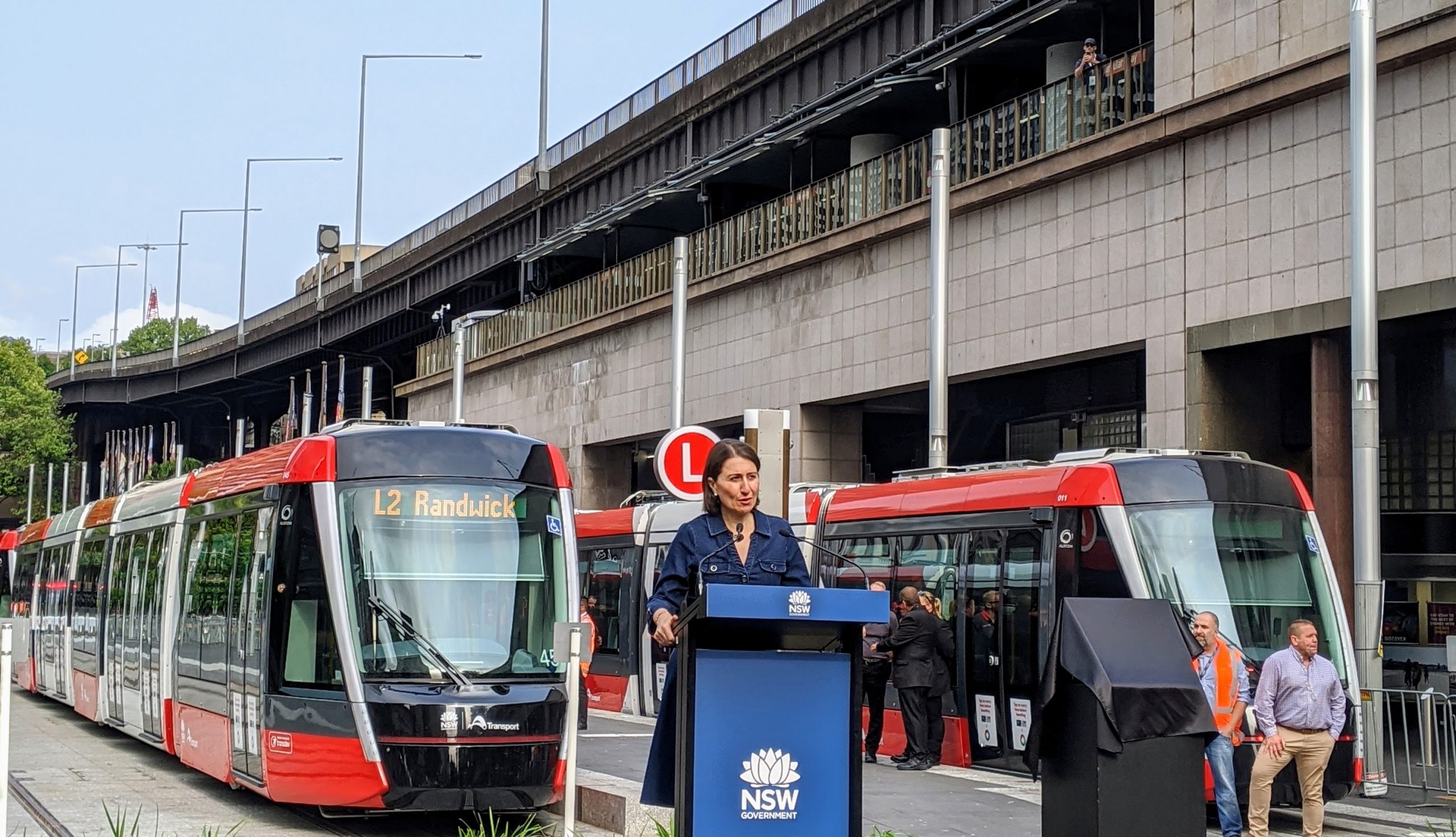 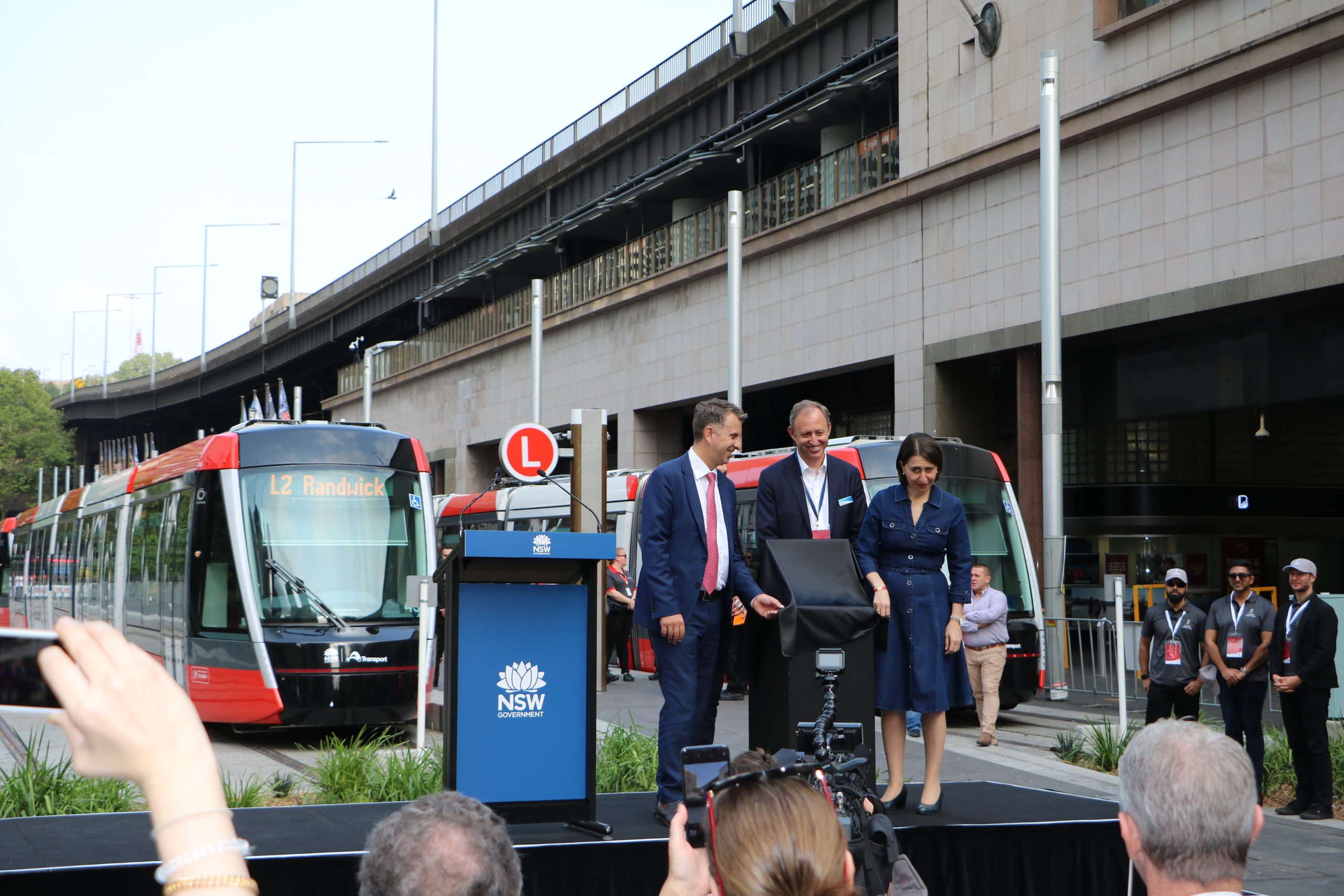 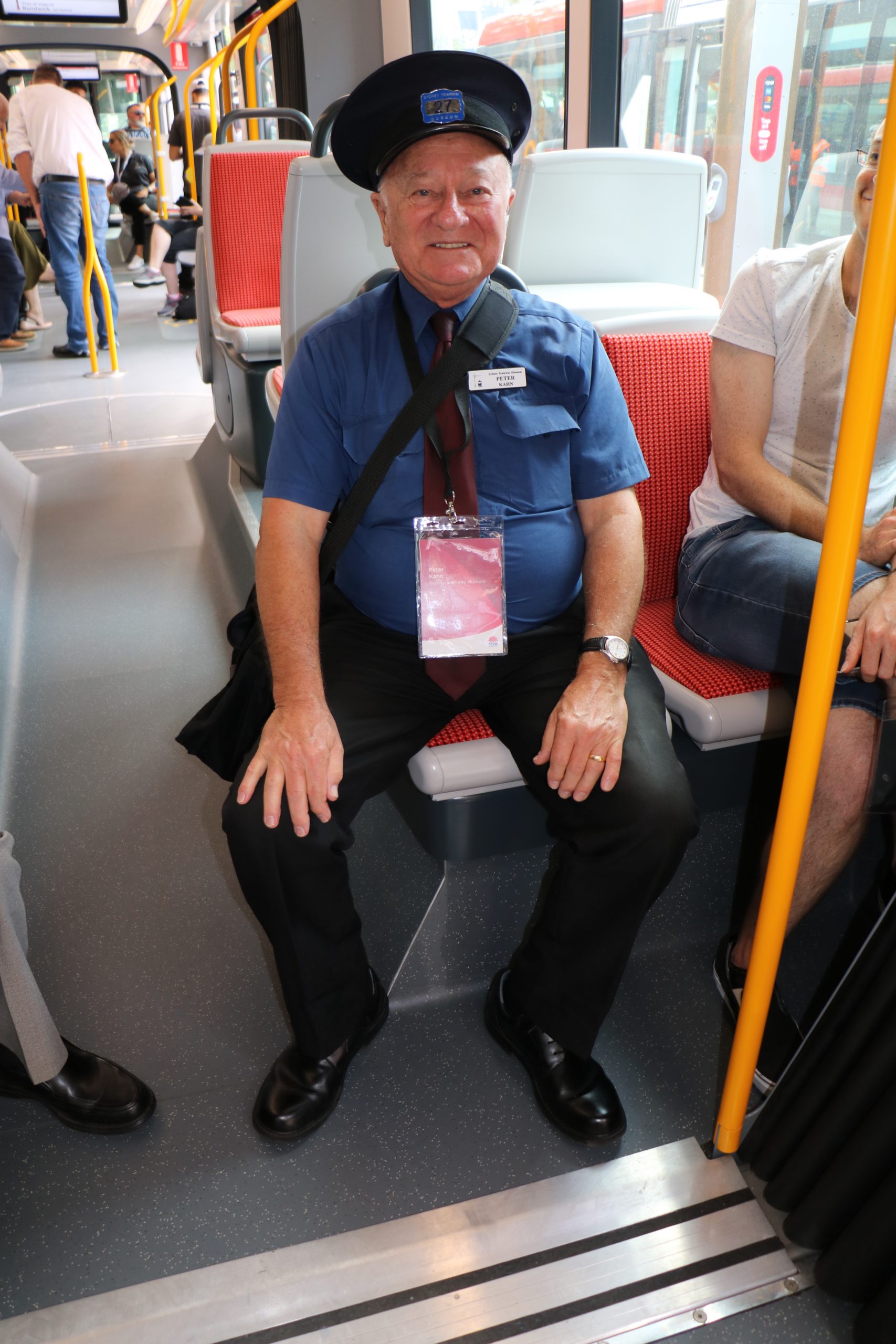 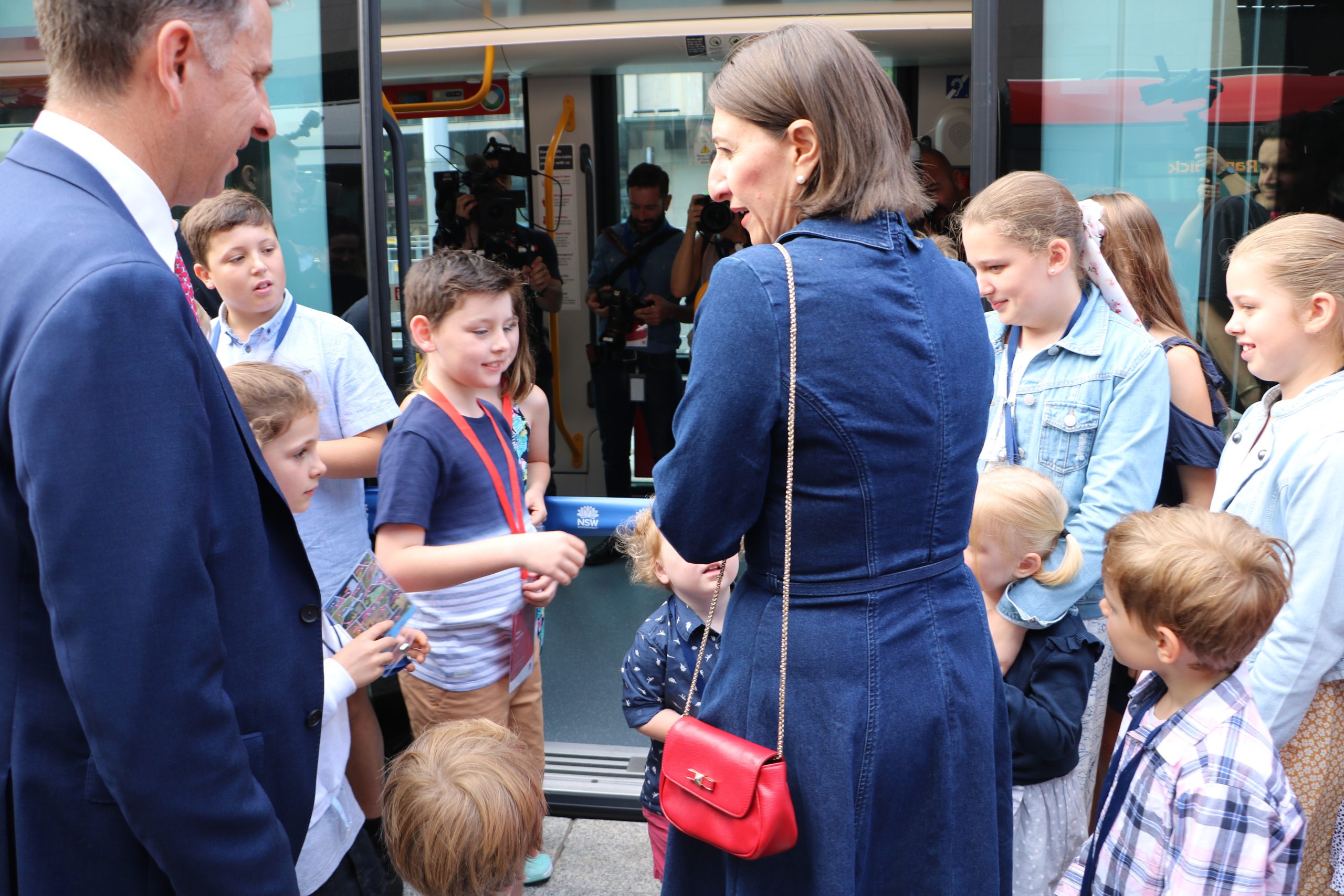 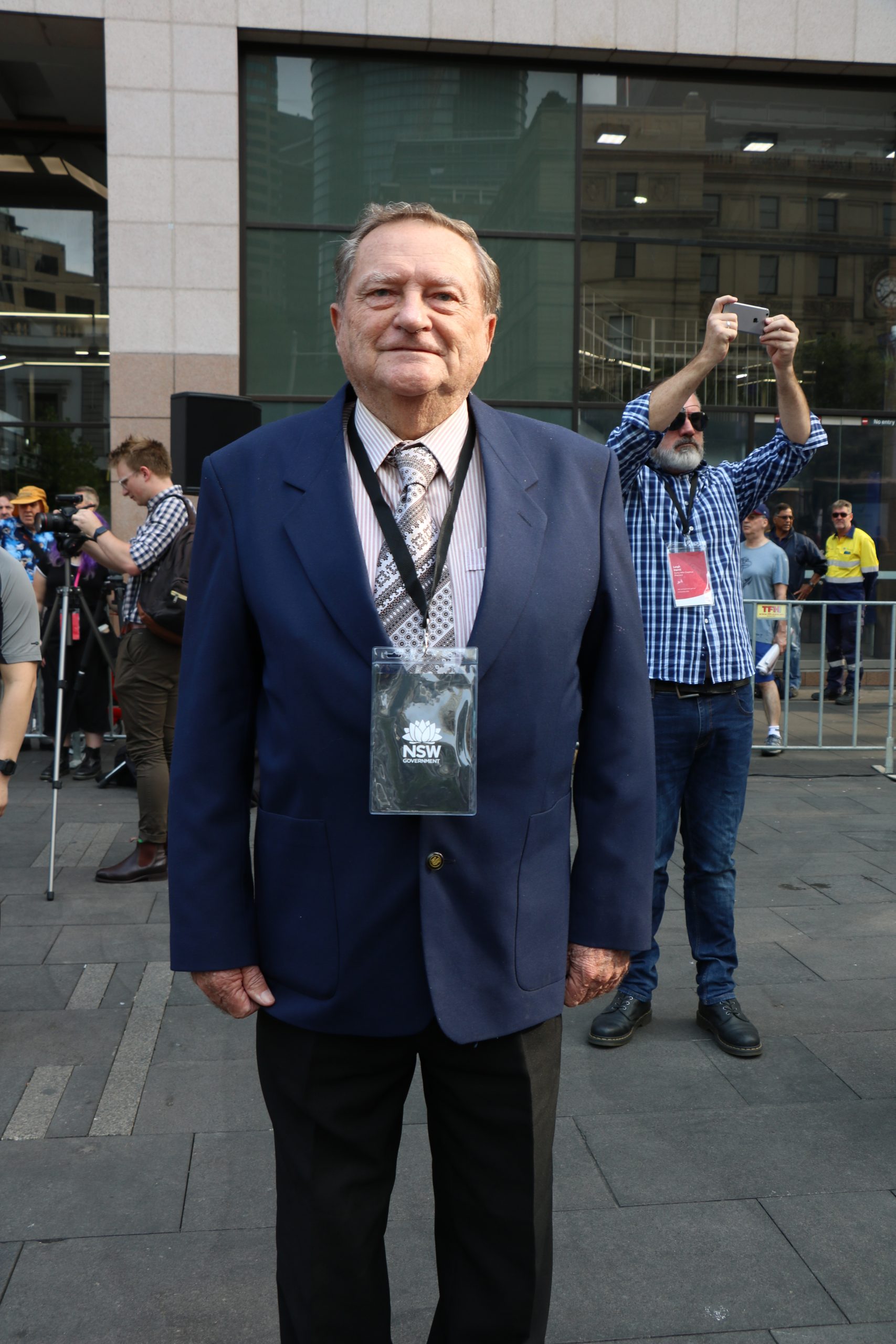 Frank Ayrton, conductor before Sydney’s original tram network was torn up in the 1960s. 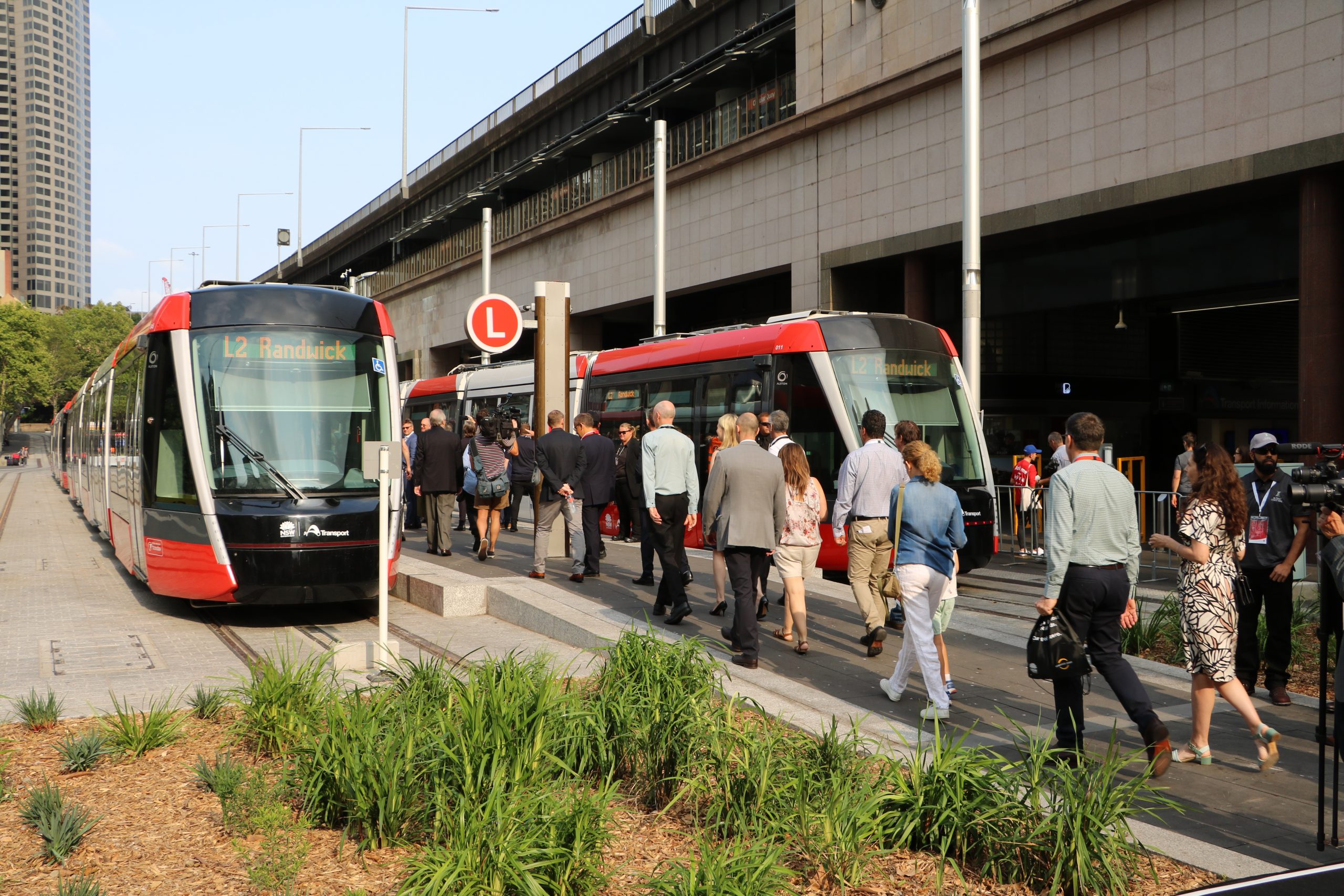 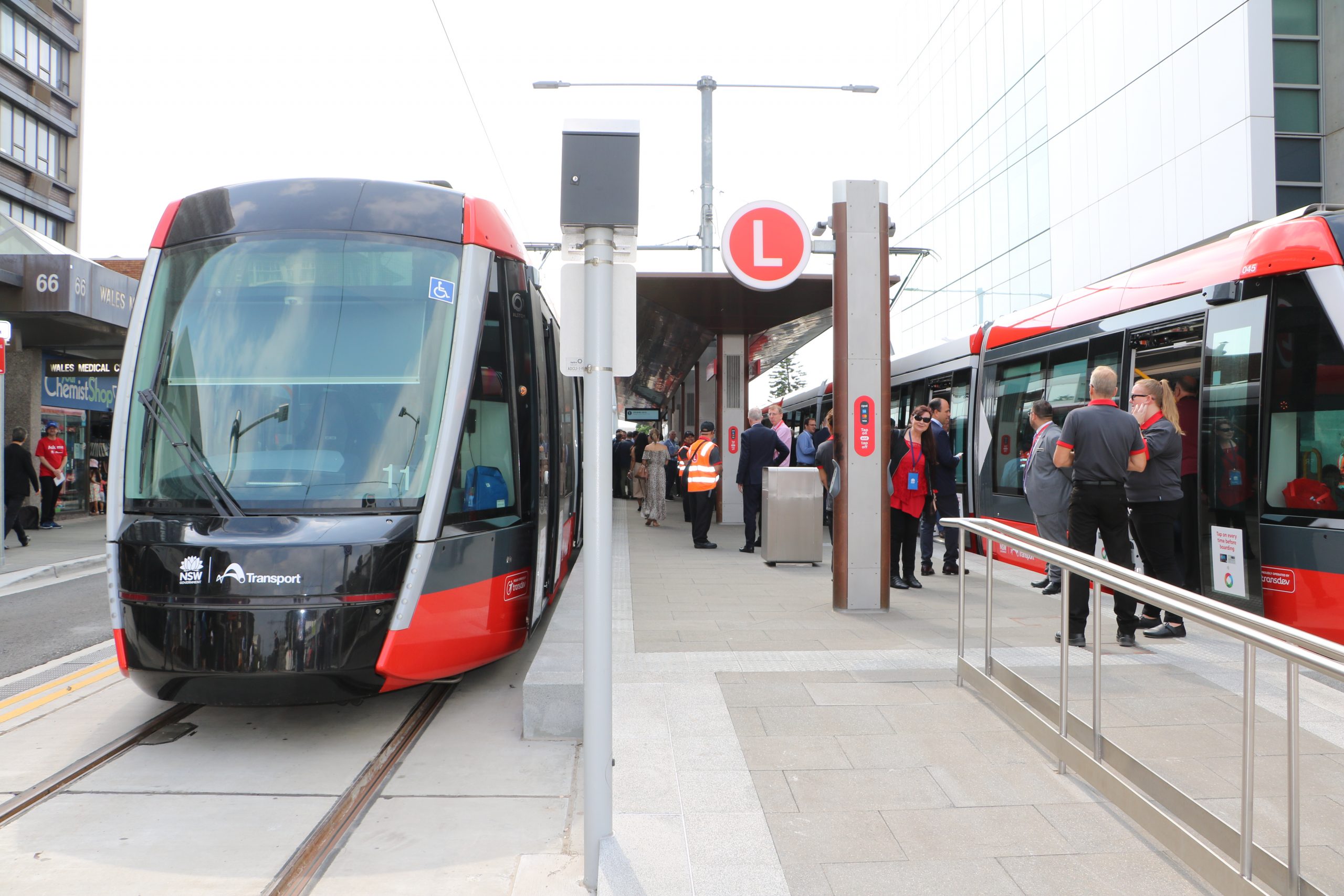 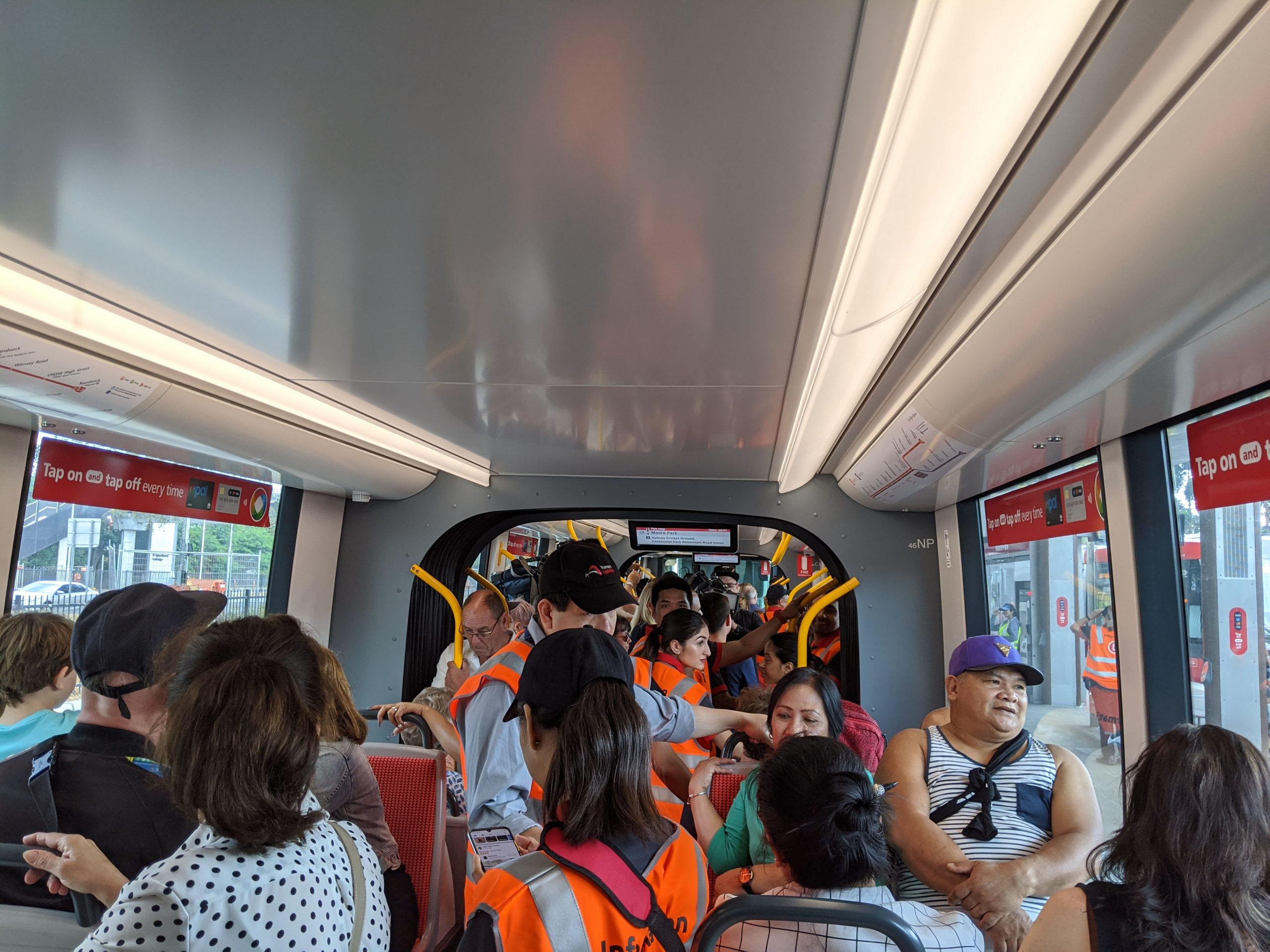 Trams were packed on the first day of services.