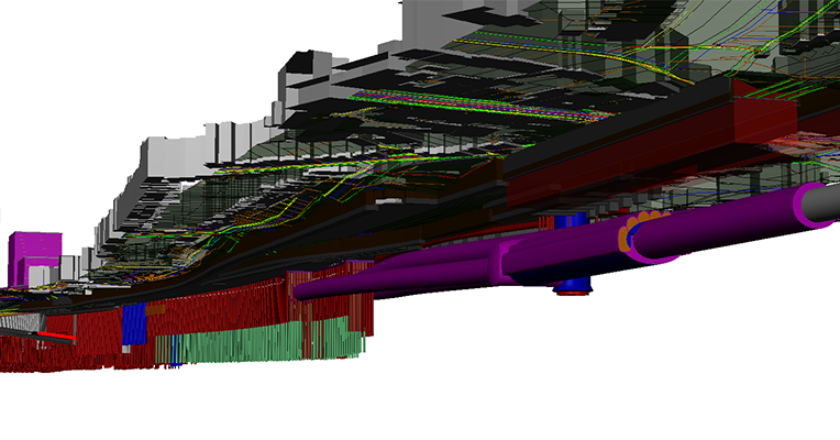 Below Rail Infrastructure, Passenger Rail, Products & Technology, Technology and IT

On the most expensive railway on earth, the pressure to get the build right first time is leading to the project team innovating in digital engineering.

In the design and construction of the UK’s HS2, a high-speed rail line connecting London with Birmingham, teams are collaborating and using digital twins to design, construct and maintain the railway. The client, the UK government, hopes to achieve savings in the order of £250 million ($450m) through digital engineering.

Beginning underneath central London, the project team, a joint venture of Skanska, Costain and STRABAG (SCS) needed a digital model that could incorporate the complicated interfaces of building under the ancient metropolis. The system that they turned to is Bentley Systems’ suite of digital tools.

Roberto Alberola, BIM information manager for Typsa which is working for SCS on the project, described why a digital solution was needed.

“The complexity of the project demanded a very high level of control of the technical outputs (models, drawings, data), so the ‘traditional’ approach – using standardized content, trusting existing or external databases and going with software defaults wouldn’t suffice.

“We created a complete custom live working environment for Bentley’s OpenBuildings Designer that lives in ProjectWise, ensuring that the models are built from a centralised library so that all the information is added consistently, achieving the highest data quality required to feed in all the downstream processes.”

Already, with the project in its early construction phases, the benefit of going digital is being realised. Through better sequencing reduced delays have allowed for better control, while enabling improvements in speed, accuracy, and efficiency. Alberola said that using 4D planning has created a 30 per cent reduction in planning time so far.

Not only will using digital tools in the design and construct phase benefit the delivery of the project, but also the project’s outcomes and legacy. The digital solution not only accounts for financial cost, but also the carbon and emissions cost. Reducing waste early on ultimately leads to a better outcome for all stakeholders.