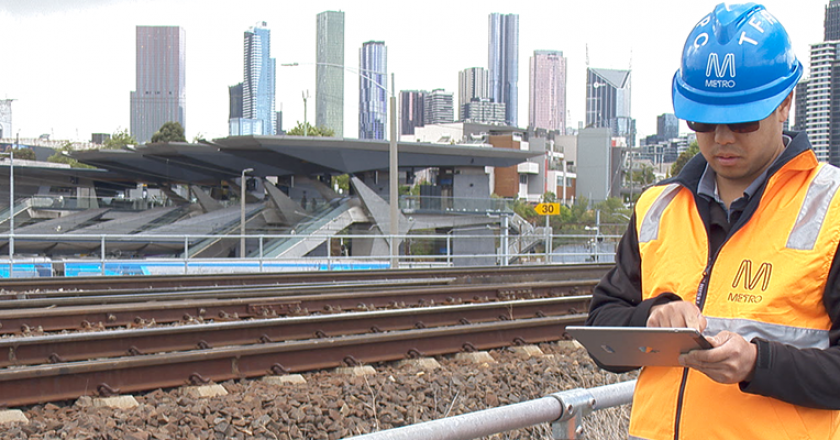 Safety, Standards & Regulation, Technology and IT

The Work on Track app enables employees and contractors to determine the safest way to access track across the Metro network on a mobile, tablet, or desktop device.

Based on data collected by Metro trains that is then presented through a web-based map, the app generates the most appropriate track protection option and excludes unsuitable options.

“The track access process is largely paper-based across the Australian rail industry, so we created a smarter and simpler way to complete the maintenance that our passengers rely on for a reliable journey,” he said.

In developing the app, existing processes were inputted as requirements. Users must follow a workflow to deliver against those requirements.

Asset data is mapped to a GIS base map that includes geographic features. The app takes into account maximum line speed, structures, gradient, and curves in the corridor to determine whether there is adequate line of sight. If the app determines that the site does not meet the line of sight requirements or in more complex areas, users can select lookout-only protection.

With the technology now in use, contractors and Metro staff have been able to reduce the use of lookout only protection, indicating that safer options are being used.

“This shows it is already helping us to manage our safety risks,” said O’Flaherty. “And using the app before our crews arrive onsite allows us to get works started and completed faster while keeping our people, passengers and plant safe.” 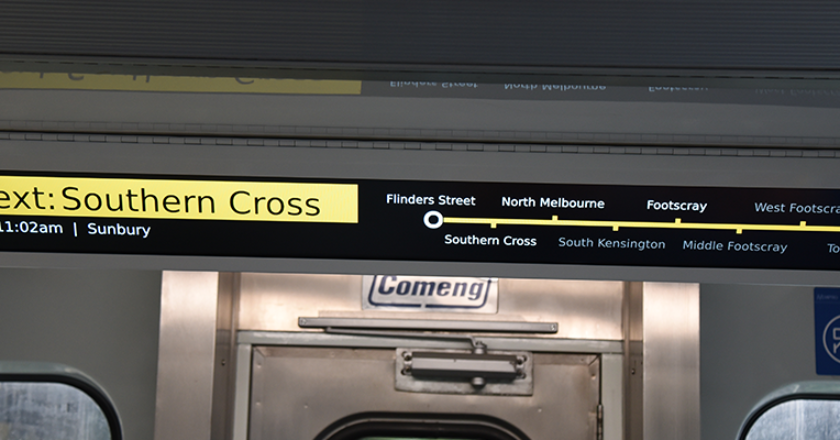 Metro Trains Melbourne’s Comeng, Siemens and X’Trapolis fleets have undergone major maintenance to ensure the trains are kept to the highest standard and improve the experience for passengers.

Melbourne trains are being retrofitted with wireless data recorders to monitor key train systems, improve safety and reliability, and maintenance, enabling the trains are available to run on the network more often.

The On-Board Diagnostic (OBD) system will give Metro engineers access to near real time data so they can monitor train performance, identify faults sooner, and maintain trains more efficiently.

The OBD project is being completed at the Newport rail workshops and has now moved on to the Siemens fleet.

The system is used to monitor everything including vibration in critical train bogie components, heating, ventilation and air-conditioning systems, as well as passenger body-side doors, traction, auxiliary power supply, and passenger information systems.

This helps Metro diagnose and respond to potential issues sooner, reducing the risk of passengers being delayed by train faults.

Metro’s general manager of rolling stock, Dave Carlton said that Metro was completing a world first with this technology.

“We’re proud to be leading the largest-ever retrofit of remote condition monitoring equipment on an existing train fleet, globally,” he said.

“The data we collect from this technology is being shared across Metro, which benefits our operations, infrastructure and network development teams.”

Technical upgrades have also been carried out on the oldest vehicles in the Metro fleet. 75 per cent of the Comeng fleet, which in total numbers 179 trains are being overhauled, with passenger-facing and engineering improvements.

In 2017, a three-stage, $75 million upgrade project began, funded by the Victorian government.

Metro’s CEO Raymond O’Flaherty said the project will extend the life of the fleet.

“The Comeng fleet has served the people of Melbourne for almost 40 years, they are brilliant trains and they’ve certainly got more life left in them,” he said.

“We have very stringent maintenance programs for all our trains, that’s one of the reasons they are still so reliable. It’s also essential that we utilise all the technical advances that are available, and this life extension program makes sure that our passengers have the best possible experience on board.”

The life extension project has three stages, of which the first two are complete.

Stage two was focused on the passenger experience, including rearranging and reupholstering seating, installing LED lights, new grab poles and straps, safer gang-way bellows, and new digital signage on the front of trains to give passengers destination information.

Upgrades have also been made to the driver’s instrument panel.

Stage three is the project’s final stage and is now almost complete. It involves upgrades to the passenger information system, with digital displays inside the carriages tracking the train’s journey in real-time.

Victorian Minister for Public Transport Ben Carroll said that upgrades would also increase safety for passengers, with new high definition CCTV cameras been fitted with a wider field of view that can be accessed remotely, which will support Metro and Victoria Police investigations.

“We can access camera footage remotely as soon as issues are reported – helping Metro and Victoria Police respond to incidents as quickly as possible and giving Victorians peace of mind that their journeys are safe.”

There are also improvements to hearing-aid links for people with additional needs and upgraded speakers for clearer on-board announcements.

On the engineering side, the trains’ air brakes are being overhauled, while the electrical relay panel and traction systems are being upgraded to support a safer journey.

New bellows were needed between carriages, which has instituted an “outer wall” that fills in the gap between the train and the platform.

By providing an exterior that is flat along the full length of the train, Metro has reduced the risk of falls for vision-impaired passengers who may mistake the gap for a door.

Since an upgrade program commenced in February this year, more than 20 per cent of Siemens trains have been upgraded with the new bellows.

As well as being safer for passengers, the upgrades also provide sound-proofing, making the carriages quieter for a more comfortable journey.

Together with Vision Australia, Metro used a mock-up train carriage to test the design to ensure it provided all the necessary safety features.

The mock-up train is used by Vision Australia to help familiarise vision-impaired passengers and enable them to move confidently around trains, while also teaching guide dogs how to navigate the network.

Carlton said this work was important for the community.

“The work we do to make sure our trains and stations are fully accessible for all our passengers is absolutely essential. Providing a public transport service means making sure that every person can use our network without limitation,” he said. 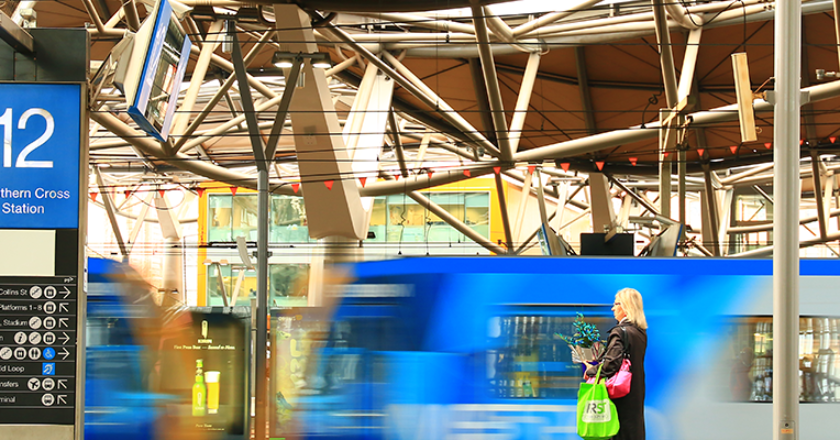 As government advice has encouraged people to stay at home during the coronavirus (COVID-19) epidemic, passenger transport numbers have plummeted.

This has led to train and tram network operators working closely with governments to ensure that public transport, deemed an essential service, can keep running.

In Melbourne the impact on transport operators is most severe, as Yarra Trams and Metro Trains Melbourne are one of only a handful of private rail transport operators in Australasia that do not operate on a gross cost model. Instead, their net cost agreement with the Victorian government allows them to keep a percentage of the farebox revenue, 40 per cent according to The Age.

Both Yarra Trams and Metro Trains Melbourne have been in discussion with the Department of Transport to enable trams and trains to keep running.

“We are working closely with the Department of Transport to ensure we can continue to offer a safe and reliable service, while protecting the health of our people and those who must travel,” said Julien Dehornoy, CEO of Yarra Trams.

While services continue to run to a standard timetable, the falls in patronage have never been seen before.

“We have seen passenger numbers drop significantly as people heed the call to stay home and avoid all non-essential travel,” said Dehornoy.

While neither operator has cut staff numbers, Metro CEO Raymond O’Flaherty acknowledged that mitigation measures are in place.

“The pandemic is unprecedented, rapidly evolving and is impacting every organisation and business,” he said.

“We’re putting in place sensible measures to support our people and ensure we can keep providing an essential service for Melbourne.”

In a statement to Rail Express, the Victorian Department of Transport reaffirmed that the networks would remain operating. If changes do need to occur, they will be made based on medical advice and communicated ahead of time.

“Public transport is an essential service and continues to run for people who need to travel – but the clear advice is: if you can stay home you must stay home,” said a Department of Transport spokesperson.

“There has been reduction in the number of people traveling on our public transport network in line with people following the advice to stay home.”

In Western Australia, metropolitan train services have been reduced in Perth. From Sunday April 5 until Sunday April 26 Transperth Trains will operate on a Saturday timetable from Monday to Saturday. The Sunday/Public Holiday timetable will remain the same. To ensure that social distancing is maintained, the Public Transport Administration (PTA) will monitor patronage, said WA Transport Minister Rita Saffioti.

“COVID-19 has had a big impact on patronage and this temporary adjustment in services is in response to that drop in demand.”