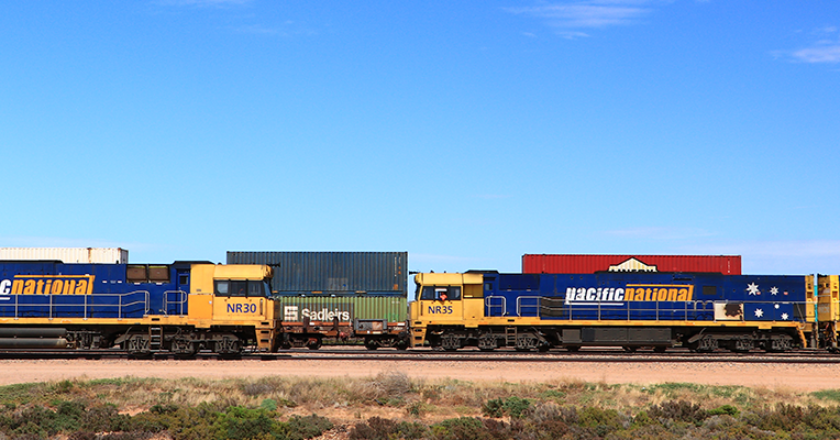 Smart thinking between Pacific National and Wagner Corporation highlights the many possibilities of rail freight.

News broke in early March that two powerhouses of regional transport and logistics were coming together for potentially Australia’s only rail-air intermodal terminal.

Pacific National and Wagner Corporation are now deep into discussions for a major logistics hub at Wellcamp Business Park, just outside of Toowoomba.

The two companies are looking to build a 250ha logistics hub at the site next to the Toowoomba Wellcamp Airport, said Pacific National CEO, Dean Dalla Valle.

“The proposed 250-hectare Wellcamp Logistics Hub also has frontage to the future Melbourne to Brisbane Inland Rail project, allowing extensive future intermodal operations for freight to be transferred between trains, planes and trucks,” he said.

The future Wellcamp Logistics Hub would include 2.7 kilometres of frontage to the rail corridor, allowing for 1,800m long freight trains to operate.

Daily cargo jet flights operate from a fully licensed and bonded international air cargo terminal next door, and the site has the potential to process up to 350,000 shipping containers by 2030, and up to half a million by 2040. The airport in question, the Toowoomba Wellcamp Airport, is owned by the Wagner Corporation, and is an example of how that company has pedigree when it comes to innovative investing in regional logistics.

The family-owned property and infrastructure developer was behind the first, privately funded major airport, built on an old quarry site owned by the Wagner family. Today, the airport connects Toowoomba and the surrounding Darling Downs region not only to domestic jet services, but also direct freight connections to Hong Kong with weekly flights operated by Cathay Pacific Cargo.

Building and operating an intermodal terminal next door, at the connected Wellcamp Business Park, allows for rail freight services along in the Inland Rail corridor to connect to global freight and logistics supply chains.

While such a connection between rail and freight would be new for Australia, it has been successfully adopted elsewhere. In Germany, the Leipzig-Halle airport forms logistics company DHL’s European hub, with plans for a network of high-speed rail spanning from the airport. Despite being the 11th largest airport in Germany for passengers, the regional airport is the second largest in the country in terms of freight, and the 5th busiest in Europe.

Similarly, at the Paris Charles de Gaulle airport in France, two air-rail cargo interchanges allow for air cargo to be seamlessly transported from air to a high- speed rail network connecting France, Belgium, and the UK.

Although both these projects have had a focus on moving mail and parcels, rather than bulk cargos, there is potential for rail to air freight playing a role in the movement of food and produce. Here, the Darling Downs can play its part as the food bowl of South- East Queensland, and a producer of foodstuffs intended for export to growing markets in Hong Kong and Asia. As Australian Rail Track Corporation (ARTC) CEO John Fullerton outlined, locating intermodal freight and expert facilities close to where the food is being produced, allows for value adding in terms of advanced processing and packaging occurring locally, ensuring these benefits remain in the community.

“Inland Rail is a once in a lifetime project which will better link regional businesses to our fast-growing capital cities, farmers and producers to national and global markets, generate new opportunities for industries and regions and reduce large truck congestion on our roads.”

Inland rail leads to spark
The initial idea for the project came from another transformative Pacific National intermodal terminal, 800 kilometres south. The idea of being the private developer behind an intermodal terminal came to John Wagner, non-executive chairman of the Wagner Corporation, when he saw what other projects were underway in Parkes.

“When Wagner Corporation attended the October 2019 opening of Pacific National’s logistics terminal in Parkes – also located on the Inland Rail alignment – it gave us an exciting picture of what could be achieved with future rail freight services at Wellcamp,” he said.

The potential for rail to improve communities was also highlighted by Fullerton.

“The growth opportunities are endless, with Inland Rail unlocking job security potential not seen in decades through strategic industry investment.”

Partly due to the region’s topography, Toowoomba and the Darling Downs region had lacked interstate rail freight connections and was thus unable to access the benefits of rail transportation. Not only will the future hub improve supply chains, but lead to community benefits, highlighted Dalla Valle.

“Picture this – at a minimum, a 1,800-metre- long freight train hauling shipping containers is equivalent to removing 140 B-double return truck trips from our roads.”

Freight rail delivering community benefits
The Wellcamp Logistics Hub announcement is tangible evidence of the $13.3 billion in benefits that a new report estimates that Inland Rail will bring to regional communities along the alignment.

Prepared by consultancy EY on behalf of the Department of Infrastructure, Transport, Regional Development and Communications, the report identified the key role that intermodal hubs would play in Inland Rail’s delivery of billions of dollars of economic benefit back to regional communities over the next 50 years.

Prepared in 2019, the report accurately predicted the kinds of outcomes that the Wellcamp Business Park could deliver.

“Inland Rail may lead to a reorganisation of supply chains and fundamentally change how freight is moved in Australia,” write the authors of the report.

“Inland Rail gives these communities new ways to grow and rebuild with better connections to interstate and international markets, new jobs and a stronger case for attracting public and private investment.”

Fullerton reiterated the importance of rail in exporting Australia’s commodities.

“Without freight trains, bulk exports like grain, meat, fresh and dry produce, cotton and coal cannot be efficiently hauled to ports, the gateways to global markets.”

While the Inland Rail project itself may be focused on ensuring that the rail corridor is built, to access the benefits of such a major infrastructure project, the links between Inland Rail and the communities it serves will be essential. Demonstrating this, the EY report found that in each of the regions studied, intermodal terminals opening from 0-10 years after the completion of the Inland Rail project will be part of the first wave of investment.

As nodes within the network, Fullerton highlighted the role that intermodal hubs will play.

These are then expected to lead to the development of industry hubs, which take advantage of the supply chain efficiencies offered by Inland Rail and congregate complementary businesses. In the case of the Darling Downs and South East Queensland, this could see grain and cotton being transported to the Wellcamp Logistics Hub, manufactured at the Wellcamp Business Park and then shipped by Pacific National on rail to other locations in Australia or via air to the globe.

As a comparative example, EY looked to the Santa Teresa Intermodal Facility in New Mexico, as an example of how an intermodal terminal can lead to the aggregation of businesses, not only in the transport and logistics sectors, but manufacturing and professional services.