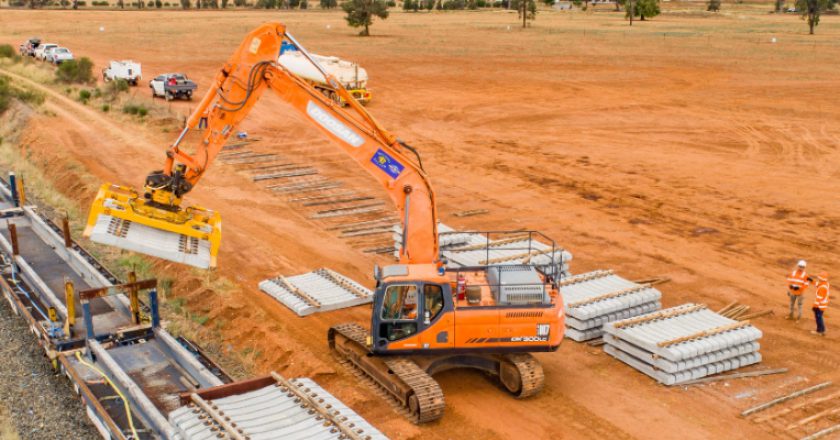 The project, a partnership between the Australian Government and private sector, is intended to upgrade the national freight network between Melbourne and Brisbane by developing regional lines across Victoria, NSW and Queensland.

The works on the section of line between Parkes and Narromine represent the first of a planned 13 Inland Rail projects encompassing over 1700 kilometres.

The track, which has been removed from the freight line between Parkes and Narromine (the P2N project), will be recycled and repurposed for Pacific National’s Intermodal Terminal in Parkes as well as other parts of the NSW rail network.

“It’s just one of the ways we keep our commitment to sustainability,” the ARTC stated in an inaugural project newsletter.

In addition to the track removal, over 100,000 cubic metres of material has been removed as a result of ongoing earthworks.

The works are being carried out by INLink, a joint venture between BMD Group and Fulton Hogan, which is focused on upgrading existing links, building new embankments and culverts, and upgrading signage, signals, level crossings and fencing.

The ARTC stated that they would install over 4000 culverts across the project in total.

Neighbouring projects include the southerly Stockinbingal to Parkes (S2P) project and northerly Narromine to Narrabri (N2N) project, which are both currently in the project feasibility stage.

The ARTC held its first community forum on the project, with two more set to follow on June 19 at the ARTC Community and Working Hub in Parkes and on June 20 at Peak Hill RSL in Peak Hill.