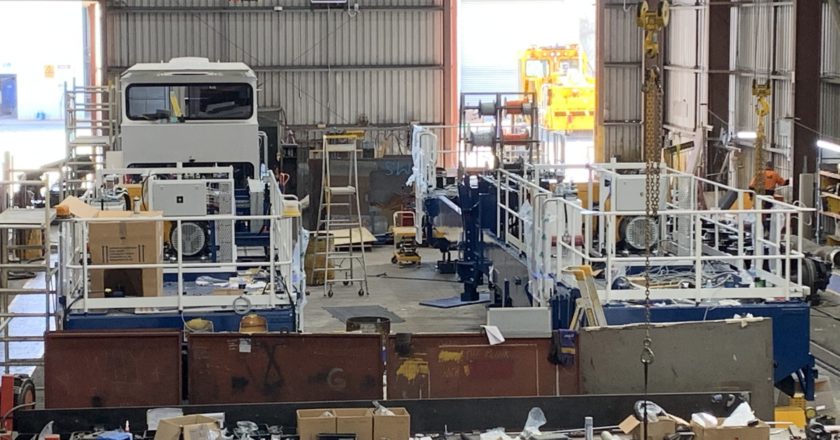 The Australian Rail Track Corporation (ARTC) has appointed Australian owned contractor Martinus as the preferred contractor for the delivery of the Rail Corridor Program for Inland Rail sections in NSW and Southern Queensland. END_OF_DOCUMENT_TOKEN_TO_BE_REPLACED 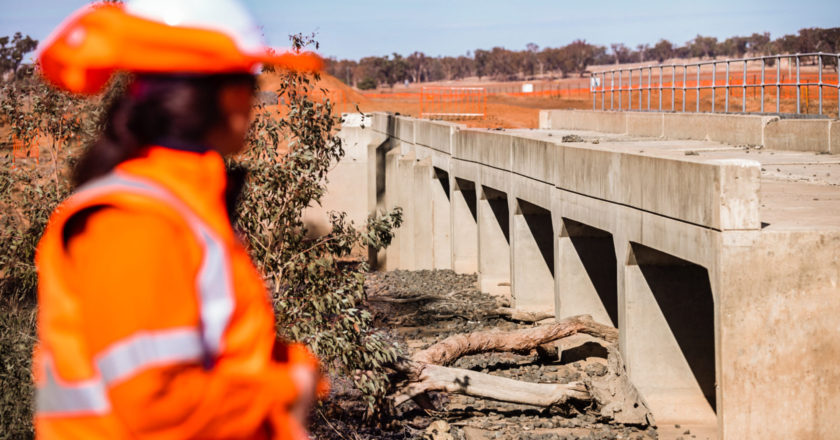 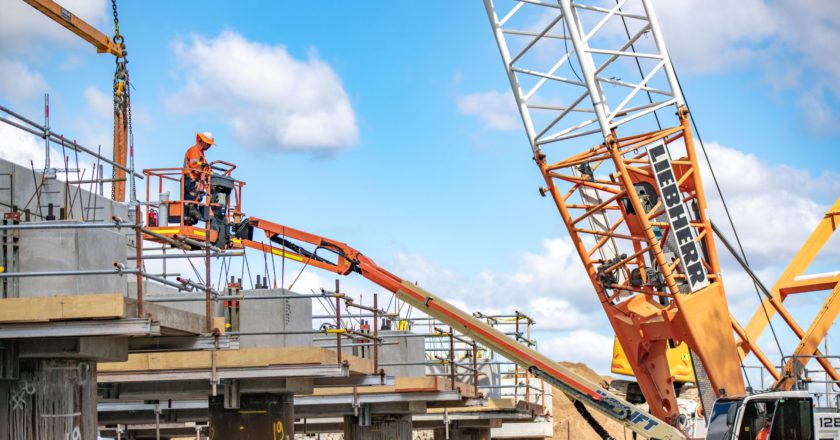 The Australian Rail Track Corporation (ARTC) has harnessed the skills of multi-national construction firm Laing O’Rourke for the delivery of civil works for Inland Rail sections in Northern NSW and Southern Queensland.  END_OF_DOCUMENT_TOKEN_TO_BE_REPLACED 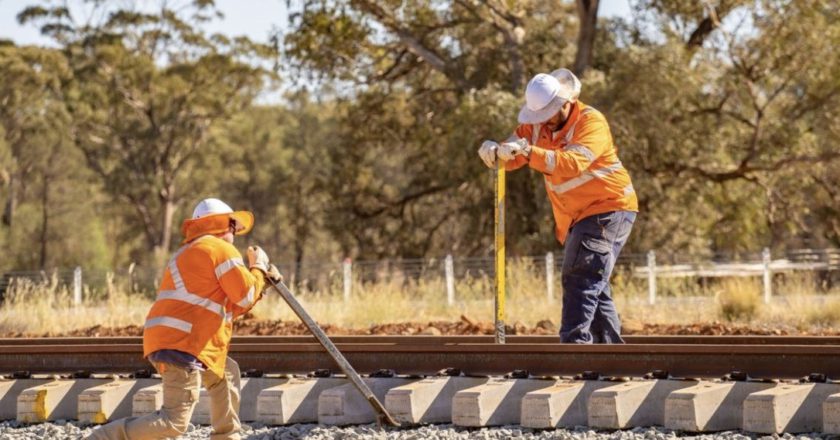 Construction continues along the Narrabri to North Star (N2NS) section of the Inland Rail alignment in NSW, despite the statewide lockdown recently imposed to arrest a major surge in COVID cases.  END_OF_DOCUMENT_TOKEN_TO_BE_REPLACED 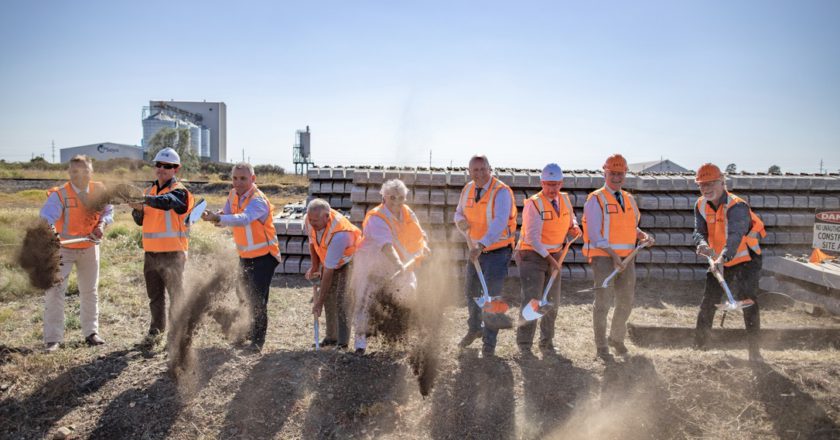 The first sod on phase one of the Narrabri to the North Star section of Inland Rail was turned on Friday, November 27 in the north-western NSW town of Moree. END_OF_DOCUMENT_TOKEN_TO_BE_REPLACED 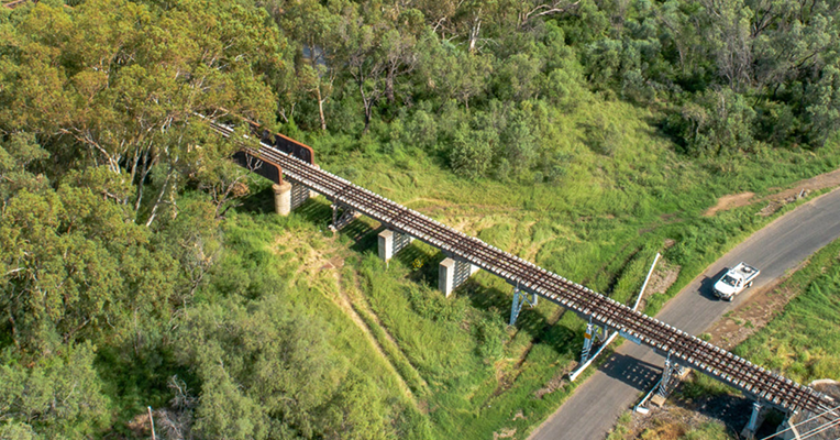 The Trans4m Rail joint venture has been announced as the successful contractor for the construction of Inland Rail between Narrabri and North Star.

The $693 million contract covers phase one of the Narrabri to North Star leg, which includes upgrading 171km of existing track. A contract for phase two, including 15km of track upgrade and 2.3km of new track, will be awarded separately.

Deputy Prime Minister and Minister for Infrastructure, Transport and Regional Development Michael McCormack said the project would be built by local businesses.

“Inland Rail is going to change the freight task in Australia and in doing so will create opportunity in regional Australia with unprecedented investment and job creation,” he said.

“This nationally significant infrastructure is being built by the skills and expertise of Australian businesses – businesses that invest locally, drive regional employment and give back to communities along this 1,700km corridor of commerce.”

Trans4m rail is a joint venture between John Holland and SEE Civil. Lendlease and another joint venture RailFirst made up of Downer EDI and Seymour White had also been shortlisted for the contract.

“Trans4m Rail has made a commitment to employ local people, engage local businesses and suppliers and work with communities in North West NSW to ensure the benefits of Inland Rail are felt throughout the community.”

Finance Minister Simon Birmingham said that the project would enable more freight to be handled by rail.

“The upgrade of another 171km of track is another important piece in the puzzle to delivering better and quicker freight access to our primary producers in regional Australia, helping them get their product to markets in Australia and overseas with more ease.”

Coulton said that this region was already seeing greater investment.

“This project is about more than just steel tracks – we’re already seeing opportunities for industry to invest in the region through the Northern NSW Inland Port at Narrabri and the Moree Special Activation Precinct – leveraging the advantages of Inland Rail to provide long-term employment and scope for future growth.” 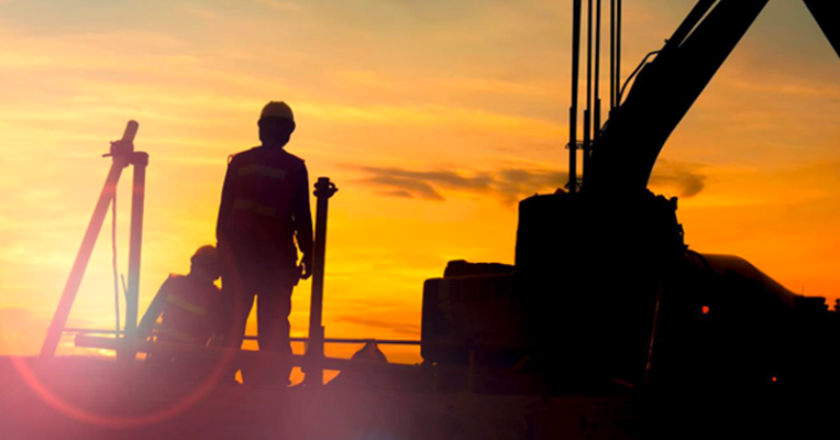 An in-depth report on the benefits of Inland Rail to northern NSW has found that the rail line will support $160 million worth of value of goods and services across 16 local government areas in its 10th year of operations.

In particular, sectors including food, grain, transport, and logistics are expected to benefit from additional investment once Inland Rail begins operating from Goondiwindi to Narromine.

The findings are part of an ongoing study conducted by accounting firm EY on behalf of the Department of Infrastructure, Transport, Regional Development and Communications into the regional opportunities that will be derived from Inland Rail’s operation. Deputy Prime Minister and Minister for Infrastructure, Transport and Regional Development Michael McCormack said that the report should motivate industry to invest in regional NSW.

“Inland Rail will provide benefits in regional communities for decades to come so we want to see industries expand outside metropolitan areas by taking advantage of the significant infrastructure we are delivering, lower land costs, resources and the ready and willing regional workforce.”

An overall report was released in March, which found that the rail line will deliver a boost of $11.5 to $13.3 billion in the first 50 years of operation.

The Northern NSW Regional Intelligence Report delves into the particular benefits that northern NSW will receive from Inland Rail. Already, the region contributes $11.5bn in gross value to the state and handles 50 million tonnes of freight a year.

In terms of jobs, the report estimates that 5,000 jobs will be created in construction across NSW, and by the 50th year of operations 360-470 full time equivalent positions will be created just in northern NSW.

In investment terms, construction will bring $2.5bn in gross state product to NSW, and by the 50th year of operations $320-360 million in gross regional product would be added to northern NSW.

“Giving businesses and communities along Inland Rail’s path access to fast, efficient and cost-competitive freight transport will connect them to new markets and will drive new investments from industries looking to expand in our regions.”

The report highlights some investments that are currently underway. These include the Northern NSW Inland Port, which is taking $300,000 of NSW government funding for the Narrabri Shire Council to undertake an optimisation study for an intermodal facility near the Inland Rail route. Other potential investments include the expansion of food and livestock processing and growth in mining investment.

“The time is now for industry to start planning for the coming decades and strategically position themselves to build resilience in their supply chains and take full advantage of the huge benefits Inland Rail is going to offer.”

“Inland Rail could be pivotal in shaping and sustaining long-term economic growth and prosperity in the regions along the corridor,” write the authors of the report. “With the right policy settings, Inland Rail can deliver economic growth through two response pathways – supply chain efficiencies and value chain growth.” 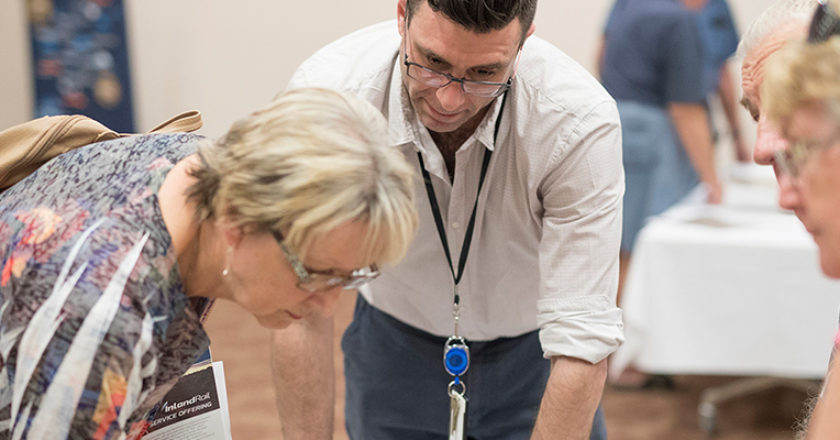 Members of the community have the chance to learn more about the progress of planning for Inland Rail between Narromine to Narrabri (N2N).

Local community members, landowners, and businesses will be able to engage with the Australian Rail Track Corporation (ARTC) throughout five community sessions being hosted by Inland Rail across the alignment between March 9 and 13.

Inland Rail will share more about the work conducted to date to refine the proposed N2N route.

“Our work to date to progress the future alignment between Narromine to Narrabri has included more than 12 months of engagement with the community, environmental and hydrology studies, and early engineering design work,” she said.

“Through these methods we have been able to refine the alignment study area from between 2-5 kilometres wide to around 150 metres to 400 metres wide.”

Pickering said the aim of the community drop-in sessions are to understand more about the environmental planning and consultation work and learn about the future opportunities for the community.

“Community consultation and engagement is vital to the success of Inland Rail. We are committed to leaving a positive legacy by ensuring the community benefits from the project through initiatives like jobs and local spend during the construction phase, the Community Sponsorships and Donations program and training and support of local businesses,” she said.

“Large-scale infrastructure projects such as Inland Rail are a catalyst for growth — they boost economic development and investment, bring jobs and opportunities to local businesses and communities, a hopefully welcome boost in challenging times of drought.”

Afternoon and evening sessions will be held between March 9 and 13 in Narrabri, Barradine, Gilganda, Curban and Narromine.

“This will provide an opportunity for everyone to stay informed and updated on the progress of the alignment to date. No registration is required for these sessions,” Pickering said. 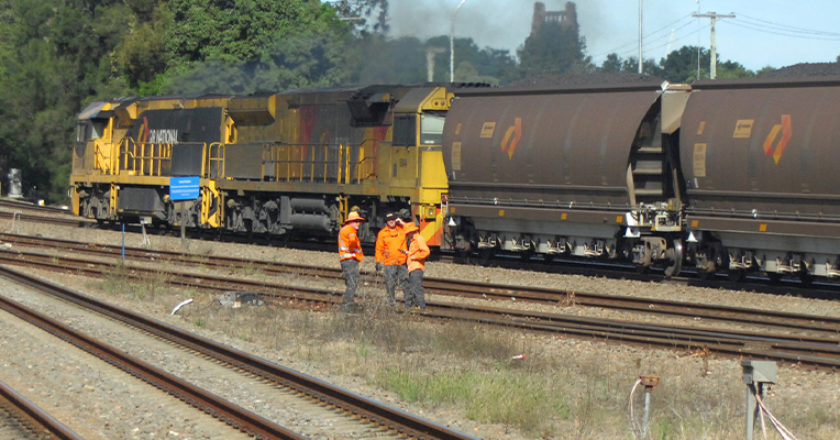 The Australian Rail Track Corporation (ARTC) will commence a three-day shutdown to conduct over 120 maintenance works from Tuesday 11 February.

Maintenance shutdown will affect the Hunter Valley Network on the rail network from the port of Newcastle through to Narrabri and out to Ulan.

Majority of the works will be on the coal lines between Kooragang and Maitland as well as the main lines from Muswellbrook to Ulan, Narrabri and Maitland.

The maintenance will include removing and replacing almost 14 kilometres of rail, upgrading approximately 1.5 kilometres of track subgrade across six sites, continue ongoing signal upgrade work between Islington and Sandgate, routine maintenance and defect removal, and various other major upgrades.

A new 120 stone Loram grinder will be introduced to the Hunter Valley to improve rail grinding performance.

“As days of extreme heat can have an impact on the track, such as causing signal faults, circuit breaks or track buckling due to intense heat conditions, we need to carry out this work to ensure the track remains safe, particularly in recent extreme weather conditions,” Johnson said.

“We continue to also carry out spot maintenance as required, to ensure the safety and reliability of the track and limit ‘hot works’ on these days, such as welding or rail grinding to reduce risk.

“We remind residents to remain vigilant as there may be more vehicle movements in and out of work sites in residential areas around the work sites.”

The work is set to start at 6.30am on Tuesday, February 11 and is expected to be completed early in the morning on Friday, February 14.

Overnight outages will impact the passenger network from Islington to Maitland and alternative bus services by Transport for NSW will be in place.

The next major maintenance shutdown is scheduled from 1 to 3 April. 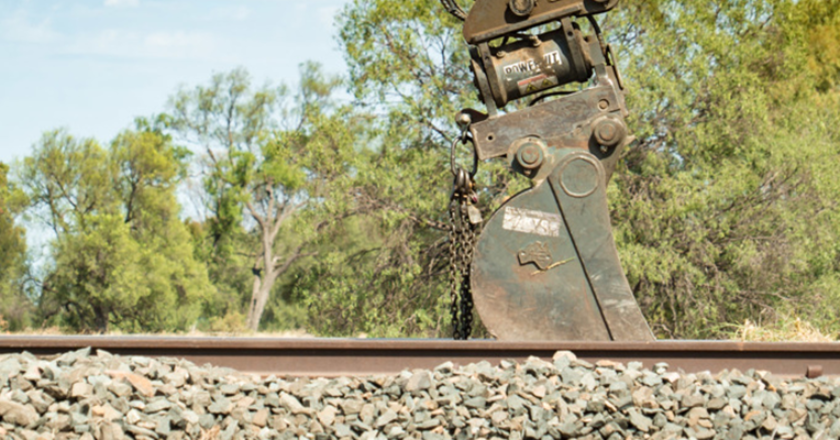 Local suppliers in Narrabri and Moree can meet the shortlisted contractors for the Narrabri to North Star (N2N) leg of the Inland Rail project.

Inland Rail will hold two networking events in the two regional centres with the three shortlisted construction contractors. Local and Indigenous businesses can hear from the contracts and connect through one-on-one meetings.

According to chief executive of Inland Rail, Richard Wankmuller, the major contractors will be looking for local businesses to partner with.

“Each one will have representatives at this event to meet with local businesses and answer questions regarding potential supply opportunities on the N2NS project when construction starts.”

To make the most of the sessions, local contractors are encouraged to prepare and ‘elevator pitch’ and be able to showcase exactly what their business does and where it is located.

“I know there is excitement building along the N2NS alignment as we move towards construction and local businesses should be taking advantage of opportunities like these to promote their capabilities to the shortlisted contractors,” said Wankmuller.

According to Wankmuller, the successful primary contractor will be mandated to incorporate local industries.

“The successful contractor will be required to deliver significant local industry and workforce participation and training outcomes, and the Australian Rail Track Corporation will work very closely with them and other stakeholders to achieve these outcomes,” he said.

“We see Inland Rail as a way to create meaningful change in communities along the alignment by developing a pathway to support longer term economic development and employment outcomes.”

The sessions will be held on January 21, in Narrabri, and January 22, in Moree.