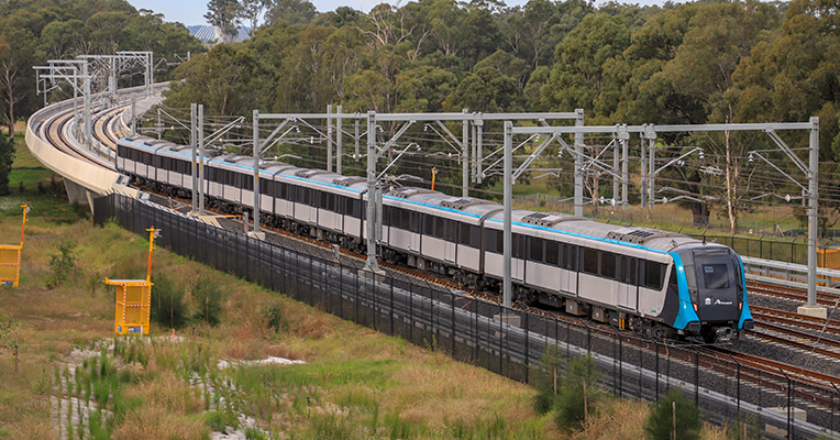 After a year of successful operations, Alstom is embedding signalling knowledge and experience from Sydney Metro into the local rail industry.

On May 26, 2020 Australia’s first fully- automated, driverless metro system completed its first year of operations. The service had already carried 20 million passenger trips across 105,000 services and was winning fans in its commuters for its frequency, reliability, and speed, having an overall customer satisfaction rating of 96 per cent.

Beyond the staff on the ground and the physical infrastructure itself, what was ensuring these high customer satisfaction metrics was the reliability of the innovative signalling system deployed on Sydney Metro.

For the project, Alstom supplied its Urbalis 400 Communication Based Train Control (CBTC) signalling system, which in the case of a driverless train such as Sydney Metro has a fundamental role to play in smooth operations between the train, the platforms and the control centre.

Although a first for Australia, this was not the first time that the Asia-Pacific region had seen the deployment of this system. Singapore was the first city to use a similar Alstom CBTC system, on the North East Line in 2003. One of the recent cases, however, was the extension of Hong Kong’s metro system known as the South Island Line, which shares an operator with Metro Trains Sydney (MTS) with MTR. This made for a smooth adaption of the technology to local conditions, said Pavan Devanahalli, Alstom’s project director for Sydney Metro.

“The Hong Kong South Island Line project was similar in terms of technology and architecture and the fact that with MTR as the operator, they were very familiar with the system and the technology. It really made sense for us to use that same platform.”

With the expertise for Sydney’s Metro North West Line drawn from Hong Kong, Singapore, and elsewhere Alstom set about adapting the system for the local conditions while building a base of local expertise.

As Devanahalli highlights, although the technology is proven, making it a success in a new context produces challenges.

“When deploying CBTC in a new environment, the challenge is the system might be mature, but you’ve got to make that work in the context of the operational conditions. The operator is new and Australia is doing this for the first time, so it was about adapting and integrating that technology.”

Alstom not only worked with the operator but also construction and civil contractors in the building of a new maintenance facility at Tallawong, the new railway from Epping to Tallawong and the retrofitting of the existing Epping to Chatswood line. Devanahalli points out that doing this while ensuring that the project was completed on time and under budget required working in parallel to optimise delivery.

“When you look at what was accomplished in the brownfield section, which was from Epping to Chatswood, that was done very quickly and there were significant lessons learnt in not only how to convert or upgrade to a new line but also in terms of the coordination of activities between ourselves and other contractors, including infrastructure works,” said Devanahalli, who expects these lessons to be applied and processes amplified in the conversion of the Sydenham to Bankstown section from suburban rail to metro.

In this section of the project, which will extend the Urbalis system from Chatswood, via new underground tunnels beneath the Sydney CBD and onto Sydenham and Bankstown, the existing train line will be upgraded. In this case, focusing on minimising disruption and maximising coordination for efficient access has led Alstom to hand-pick key talent to ensure the project is completed smoothly.

SETTING A BENCHMARK FOR OPERATIONS
While Sydneysiders have enjoyed the frictionless Metro North West Line, Alstom has been optimising the software behind the services to enable the growth of the system’s capacity. Being a digital system, Devanahalli highlights that the signalling team have been working with the operator to bed down the system through a series of software upgrades to enable greater efficiencies.

“What we’ve done during the course of the last year is optimise the software to meet the operational needs of MTS. We have had not only our international expertise pool available but also we have our local expertise that can react quite quickly to any new need or operational requirements.”

On the first day of operations, headways between trains were set at five minutes, however the intention was always to reduce that to four minutes once the system was in place.

“The timetable changed from five to four minutes between trains and all of that was done seamlessly. Of course, there was quite a bit of machinery moving in the back end but what that meant is that we could support the vision of Sydney Metro” said Devanahalli.

Even with all of the complexities that come with an entirely new train system, after a year the system has achieved figures of 98 per cent system reliability, and 99 per cent train availability. Devanahalli puts this down to the work of the entire array of partners who came together on the project.

GETTING THE LOCALS ON BOARD
Although Alstom initially brought in its expertise from projects in Asia as well as Europe, throughout the delivery of the new driverless line the company has built up a local talent pool for the next stages of City and Southwest.

“They went through a rigorous process over two years of going through the design and commissioning, and they’ve now been deployed in the operations centre, warranty and maintenance programs so they can now experience what it means to be in the operations and maintenance side of a project,” said Devanahalli. “The talent has been strategically groomed over the last three years and in-between the two projects they’ve been sent to Melbourne and Singapore for ongoing technical training, leadership, and professional development.”

Having some of the most advanced signalling projects occurring around the world in Australia right now has created a motivation for new signalling engineers to deliver the current generation of digital signalling.

“CBTC is really about software,” said Devanahalli. “But, on these projects, installation is key. Having a partnership and collaborative approach to delivering these projects is absolutely essential in Australia. No one person is delivering a project.”

Having built up a base of local expertise in the delivery of software-based signalling projects will enable future improvements to the system that allow for flexibility as demand shifts and changes.

Overall, Devanahalli highlights that the experience Alstom has had on Sydney Metro, as well as other projects around the globe, is that when it comes to signalling, it is not the product that is important, but the outcome that the signalling system can provide – safety, customer satisfaction, reliability and availability.

“The beauty of the CBTC system is that it’s interfacing with almost everything that happens on the railway, so there’s not a single system that it doesn’t touch – except maybe the station elevator. It’s really a matter of identifying the right technology and being able to interface that to CBTC. From that point forward the CBTC software does its magic.”