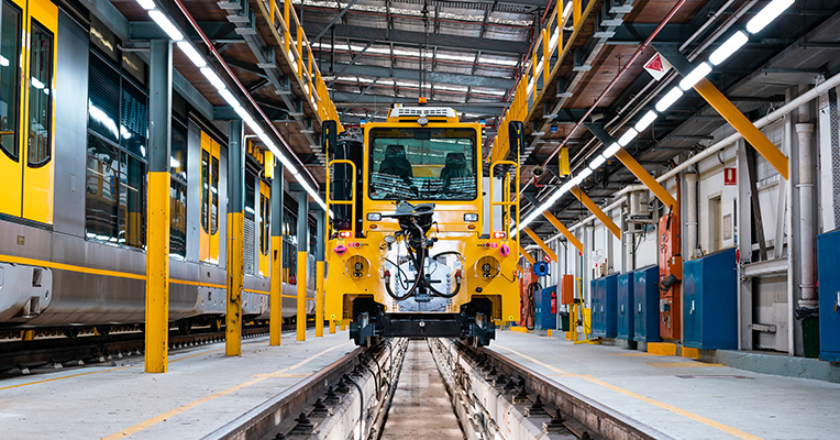 Working with Sydney Trains, Freightquip has provided a shunting solution that is low noise and zero emissions.

When Sydney Trains was looking to replace two shunting vehicles, in use at the Hornsby and Mortdale depots, it needed a solution that was low noise, low emission and had the ability to complete the same shunting task as previously. To fulfil this requirement, the transport agency turned to local freight handling equipment supplier Freightquip.

Neil McDonell, general manager rail at Freightquip, said that after winning a competitive tender process, Freightquip worked with Sydney Trains to get the right fit.

Sydney Trains had a number of requirements that Freightquip had to fulfil, the first being able to move trains weighing many tonnes.

“The big thing for them is having a machine that could achieve the shunting task, but then also having very low noise emissions because of the locations of the depots,” said McDonell.

Both the Hornsby and Mortdale depots are located in residential areas and are surrounded by houses. This required Sydney Trains to minimise any emissions, both noise and exhaust.

“They’re surrounded by residents, so they have very stringent guidelines imposed on them that they have to meet. It was a mammoth effort to be able to give them something that achieved those levels of emissions,” said McDonell.

The solution that McDonell and Freightquip turned to was the Zephir LOK E, a fully electric rail vehicle placer.

“Zephir produce the largest electric shunter in the world and we as the Australian agents are able to offer that,” said McDonell.

The LOK E is an evolution of Zephir’s range of rail towing vehicles. Founded in the late 1960s, the company has been an early innovator in designing equipment that can complete the same task with zero emissions.

“Twenty years ago, Zephir started making small electric shunt vehicles, then as the need and demand rose from customers who wanted electric, zero emissions, and the low noise vehicles, but couldn’t sacrifice the towing capability of the machine. That led then the next evolution,” said McDonell.

“Starting with the smallest model, Zephir then grew the technology and grew their understanding so that now, the largest diesel machine they produce, they can also produce as an electric machine.”

While the new electric vehicle would have no exhaust emissions, Freightquip still had to meet Sydney Trains’ noise requirement of 45 decibels or less, seven metres in front of the machine, which was below what was standard for the LOK E. Here, Freightquip drew on past experience to come up with the solution in partnership with Zephir.

“We had done work previously with a diesel machine in a similar but different environment, where we had to reduce the noise levels of the diesel machine,” said McDonell. “We were able to take that knowledge and apply it to an electric machine, which comes with very low noise emissions anyway but still has things like hydraulic pumps and compressors that we had to factor in.”

To insulate the noise of the onboard pumps and compressors, Freightquip adapted the existing insulation while changing the concept design to direct the noise. The rear grill was also replaced to reduce the noise levels.

This particular design process was the outcome of consultation that Freightquip conducted with Sydney Trains and the staff onsite.

“We spent a lot of time with the client, understanding what the end user needs, those who are actually going to operate it in the depots. We had meetings with the depot personnel themselves and they were part of the then final specification and options selection process,” said McDonell.

Beyond the noise requirements, Freightquip also designed the stabling sites for the rail vehicle placers and identified and overcame and track infrastructure issues. These were done early on so that any concerns were resolved prior to the vehicles coming on site. In addition, the product design was altered to ensure that the vehicle met Australian specifications for safety and compliance.

With the vehicles now installed, Freightquip will provide ongoing support.

“We supply all the technical support,” said McDonell. “We do the full lifecycle support from scheduled servicing on these machines in accordance with the manufacturer’s service schedules, we support these machines with parts, right through to the end of the lifecycle of the machine.”

With the innovation that Zephir has conducted to provide the machines, the electric versions of each of the models are cost competitive with the diesel version. Reduced lifecycle cost from a 70 per cent reduction in moving parts and simpler maintenance, in addition to the reduced cost of powering the vehicle, have made the electric versions the product of choice.

Visit Freightquip at their homepage.