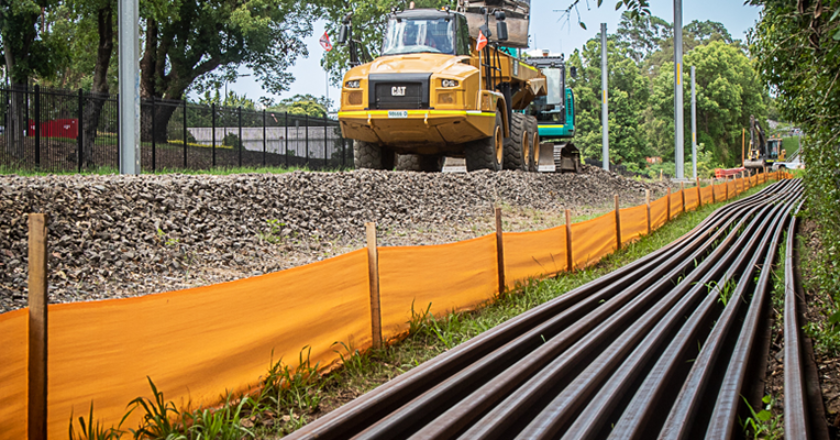 Recycled materials are being used on transport projects in Victoria and NSW, making the most of the many infrastructure projects currently underway.

In Melbourne, the newly opened Kananook Train Storage Facility, located in Seaford, used over 11,000 tonnes of recycled rail ballast. The ballast was previously in use on the Melbourne train network and was extracted during the Carrum Level Crossing Removal Project. Instead of going to waste, the ballast was used to build the new storage facility.

The re-use of materials such as ballast reduces the use of raw materials and cuts associated energy used in the mining and transportation of these materials. The project’s environmental impact was also improved by the installation of solar panels on the building’s roof.

The Kananook Train Storage Facility will allow for more trains to run on the Frankston line. A signal control centre at the same site will also help to minimise disruptions by centrally managing train movements. The site includes room for further train storage or a train maintenance facility if required in the future.

In NSW, the Parramatta Light Rail project, which is partly following the former Carlingford Line corridor, has maximised the retention of rail infrastructure from the former line.

Over 15,000 metres of single rail, 13,650 rail sleepers, 13,000 metres of overhead wire and the existing track ballast will be reused on the new light rail line.

Across the entire 12km light rail route, which travels from Westmead, via the Parramatta CBD to Camellia and finishes in Carlingford, recycled components will provide around 30 per cent of the track.