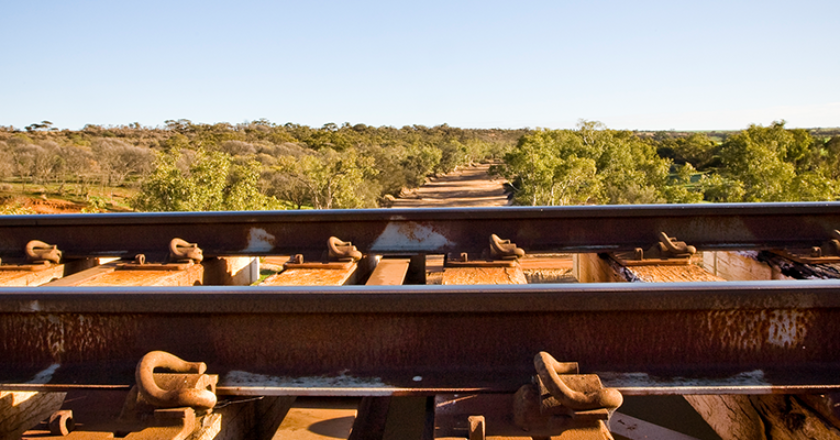 As severe weather events become more intense and frequent, rail infrastructure owners and mangers are responding to this new reality.

During the summer of 2019-2020 the rail industry experienced almost all of these impacts.

In New South Wales, bushfires closed multiple major train lines, including the Main Western Line through the Blue Mountains, the Southern Highlands Line between Goulburn and Macarthur and the Unanderra Line between Moss Vale and Unanderra.

Rail infrastructure owners around the country felt a number of these impacts, and Arc Infrastructure, the manager of the WA rail freight network, was no exception.

“This summer we have seen bushfires in the South West, Mid West (Mogumber) and Kalgoorlie/Esperance cause interruptions to rail traffic, heavy rainfall impacting track infrastructure, and an electrical storm in the Mid West affect signalling and communications infrastructure on the Eastern Goldfields Railway,” said an Arc Infrastructure spokesperson.

Sydney Trains also acknowledged how the weather can impact infrastructure.

“Extreme weather events, such as high temperatures, strong winds, lightning, bushfires, high rainfall, and flooding, can have a significant effect on the performance, efficiency and operation of Sydney Trains’ infrastructure,” said a Sydney Trains spokesperson.

With these increasingly severe and frequent weather events recognised as constituting a new normal, rail network managers and infrastructure owners are having to grapple with what this means for their assets.

In Infrastructure Australia’s Australian Infrastructure Audit 2019, resilience was a key theme. The report acknowledged that although Australia’s extremes have been well known – floods, drought, fires, and cyclones being an almost yearly occurrence – resilience, the capacity to recover quickly from difficulties, was not reflected in planning processes.

Resilience takes a different kind of thinking than had been previously reflected in planning documents. Although methods and protocols to repair damaged infrastructure were established, the data to be able to predict future events was not always available.

“Timely access to evidence that aids the evaluation of likelihood and consequence can help the planning of construction, maintenance and resilience. However, evidence about the scale of risks, their impacts and the costs of addressing them is often weak or not accessible,” write the authors of the report.

In this context, climate change becomes a compounding factor. The modelling of risks is based upon events that have happened in the past. When events start becoming more frequent and outside the historical range of severity, these models have to be re-evaluated.

“In a rapidly changing environment, risks shift in nature and severity, complicating assessment. This can lead to reactive, rather than proactive, responses to both short- and long-term risks to networks,” write Infrastructure Australia.

The report notes that there is much to be done.

“Australia’s infrastructure sector lacks clear, publicly available guidance on how to manage risk and plan for greater resilience in the future.”

THE RAIL INFRASTRUCTURE OF 2100, BUILT NOW
While Infrastructure Australia’s assessment was made for Australia’s infrastructure as a whole, rail itself has some key challenges. Rail networks are expected to last for up to 100 years, with some track in use today laid in the early 20th century.

The longevity of rail infrastructure presents a critical issue, as the cost of relocating infrastructure has been so high as to be prohibitive. However, as noted in Building resilient infrastructure prepared by Deloitte Access Economics for the Australian Business Roundtable for Disaster Resilience & Safer Communities, the increased cost of natural disasters will lead to the replacement of damaged assets becoming equivalent to the entire cost of large infrastructure programs, suggesting that resilience building is a nationally significant infrastructure project on its own.

Within this context, the rail infrastructure being built now has to account for changes expected to occur in the next 100 years. In the best-case scenario of global temperature rise being kept to between 1.5 and 2O°C, sea level rises of up to a metre are predicted. The knock on effects of this on rail track infrastructure have been catalogued by the ARA.

Sea level rise will directly impact low lying sections of track, particularly those freight lines that carry bulk cargo for export. Increases in extreme rainfall, leading to flooding, can cause assets to be inundated and landslides. With sea level rising, coastal and inland areas will be vulnerable to inundation, and increased frequency and severity of heat waves will cause track buckling and brownouts and blackouts.

With these risks in mind, the ARA calls for the industry to look at mitigating risks via a long-term program of activities. Whether collaborative or led by individual organisations, the ARA notes that successful planning will require the embedding of adaptation and continuity into planning, development, maintenance and improvement programs of all major rail infrastructure owners.

Some infrastructure owners are already planning of how to respond to this changed environment.

Sydney Trains, whose network was significantly affected during the summer of 2019-2020, is building resilience into the physical nature of the network.

“In recent years, Sydney Trains has undertaken a number of initiatives to protect the network from weather events. These include replacing timber sleepers with concrete to reduce the likelihood of significant rail head movement, tension- regulated overheard wiring, improved lightning and surge protection at assets like control centres and substations and improving advanced weather warning systems,” said a Sydney Trains spokesperson.

These works are part of a $1.5 billion annual program of routine and periodic maintenance across the network.

“We have an innovative research project underway across our network to prevent the risk of derailment through the use of research, data and technology, supported by the deep knowledge and experience of our people.”

Arc Infrastructure is currently in the process of building a system to predict, detect, and prevent derailments that occur as a result of track section washaways, said an Arc spokesperson.

“In order to predict washaways, we are using various sources of information (including historical track washaway data, historical rainfall data and topographical data) to understand and quantify the potential damage caused by various intensities of extreme weather across our network. This data is then being correlated with realtime rainfall data to generate alarms for probable washaways on specific sections of track.”

So far, the project is being tested on historical events, with results showing that of the washaway events that occurred in February 2017, 47 per cent of the locations were predictable, based on the analysis.

Across Australia, a combination of planning, technological innovation, and consistent maintenance will be required to ensure that the rail netowrks laid down today can be used safely and efficiently in 2100.