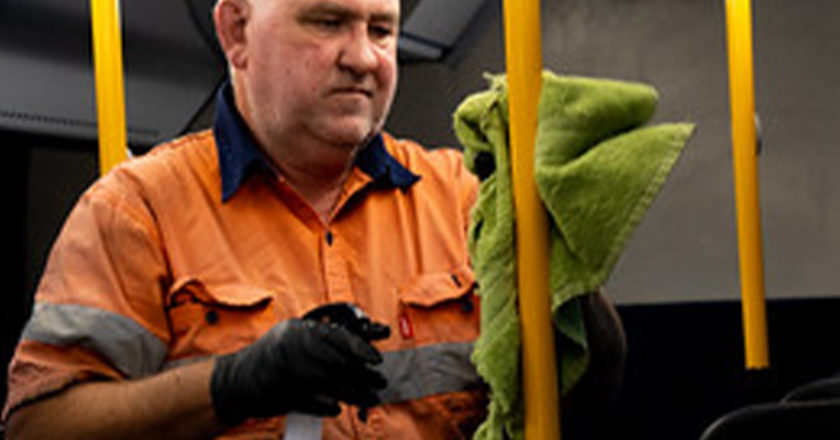 Major Australian rail operators are helping authorities minimise the spread of COVID-19 by seriously ramping up hygiene and cleaning protocols.

Current advice from the Australian Department of Health is that everyone in the community should go about their business as usual, unless they have travelled from a country or region with a high or moderate risk of COVID-19, or have had contact with a confirmed case of coronavirus. There is no need to take actions like limiting movement on public transport.

On Tuesday, March 17 the NSW government announced that part of the $2.3 billion economic stimulus, $250 million will be invested to employ additional cleaners of public infrastructure, which includes TfNSW’s external operators statewide.

Cleaning squads have been deployed across NSW trains, light rail, and the metro, particularly in high-traffic areas including Central, Town Hall, and Wynard.

TfNSW is encouraging customers to use Opal and contactless payments where possible, to further reduce chances of community spread and safeguard staff.

Andrew Constance, NSW Minister for Transport said while staff have boosted maintenance and cleaning efforts on the network in response to COVID-19, customers need to take extra precautions too.

“For those services that do not offer contactless payment, we are advising all frontline staff to wash their hands and use hand sanitiser to limit the spread of viruses,” he said.

Jeroen Weimar, head of transport services Victoria said we’ve all got a part to play in responding to the significant challenge presented by COVID-19.

A Victorian DoT spokesperson said all operators on the state’s network have been asked to activate their increased cleaning protocols which will be rolled out in the coming days.

The increased cleaning measures mean all carriages on Metro Trains and V/Line trains will undergo nightly sanitation, and Melbourne’s trams will undergo a deep clean before each service.

A TransLink spokesperson said it  is working behind the scenes in preparation and have plans in place to respond to any recommendations from Queensland Health.

Queensland Rail has stated in an update that it has strict maintenance and cleanliness standards for its trains and stations to ensure the comfort and safety of customers and employees.

SAPTA has also increased cleaning schedules and extra crew are being used across all modes with particular focus being given to hard surfaces such as handrails, validators and push buttons.

Stephan Knoll, SA Minister for Transport and Infrastructure said the safety of passengers and staff remains the highest priority.

“We are taking these additional measures to help protect South Australians who deliver and rely on public transport to get to work or go about their daily lives,” said Knoll.

Transport Canberra said there have been no changes made to public transport, and all governments are working together to ensure a national approach.

“We are implementing an increased cleaning regime on our light rail vehicles as well as at high-traffic areas such as stops and interchanges,” Transport Canberra stated.

Rita Saffioti, WA Transport Minister said along with other state transport agencies, Transperth trains have transitioned from getting a basic daily clean each night to a full daily sanitation.

“So far there is no evidence of community transmission in WA, and the increased cleaning regime is intended to reduce the risk – as much as practical – against potential exposure,” Saffioti said.

Across the Tasman in New Zealand, Auckland Transport have been quick to adopt similar health and safety initiatives to those that have been put in place by Australian transport operators.

Auckland Transport (AT) advised in a statement that the NZ Ministry of Health has made it clear that there are no issues with people using trains.

“While many Aucklanders are working from home during this time of uncertainty, those continuing to use public transport should use good hygiene practices,” Auckland Transport stated.

Phil Goff, Auckland Mayor, said AT is well-prepared for a possible escalation of its COVID-19 response and has taken steps including installing new public hand sanitiser stations and has increased the cleaning of vehicles and facilities.

Shane Ellison, Auckland Transport chief executive, said AT are making sure information and advice from the NZ Ministry of Health on preventive measures is being supplied to its staff, operators, and contractors.

AT have created a COVID-19 update section on its website, as have most rail operators and state transport departments in Australia, to inform staff and passengers with the latest information.