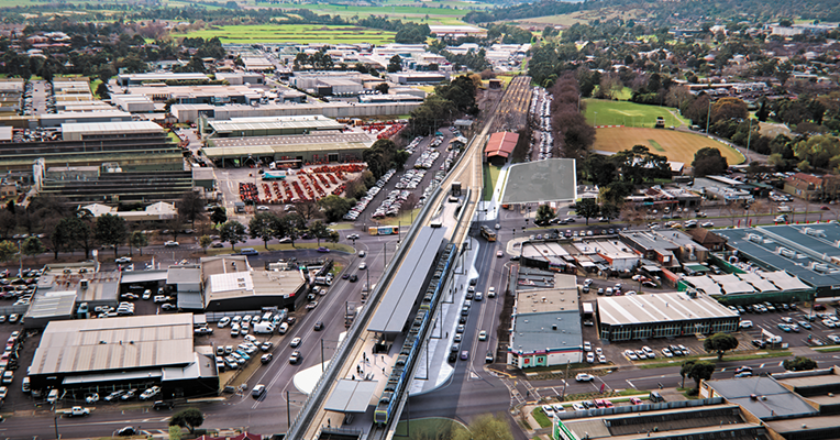 At both sites, works to establish construction sites are beginning, with service relocations and vegetation removal commencing. Fencing and construction workers will arrive in the coming days and weeks.

Most major construction will begin towards the end of 2020. In preparation for this a test pile will be sunk into the ground at the western commuter carpark at Lilydale station to determine the depth needed for foundations for the rail bridge over Maroondah Highway.

In addition to removing the level crossings, two new stations will be built at Mooroolbark and Lilydale, as well as a multi-deck carpark at Mooroolbark to increase capacity to 900 spaces.

Completion is expected by 2022.

In late December 2019, the $496 million contract for both crossings was awarded to an alliance of Laing O’Rouke, Jacobs, and Metro Trains Melbourne.

Work will involve raising the rail line above both roads and elevated platforms at each new station.

Over 53,000 vehicles travel through the two level crossings each day, with boom gates down for a quarter of the morning peak. In the last 10 years there have been 13 crashes, with one fatal incident.

In Dandenong South, the new rail bridge over Greens Road has been updated with new screening to keep maintenance workers safer once the project is complete. The removal of the level crossing there is part of the $679 million Cranbourne Line upgrade, which involves track duplication and more frequent services.

Work sites at Greens Road have been established since March, along with utility works and preparatory works for line duplication.

Once finished, the screens will surround both viaducts which will carry the rail line over Greens Road. An alliance of McConnell Dowell, Arup, Mott MacDonald, and Metro Trains Melbourne will remove the level crossing at Greens Road and duplicate the line between Dandenong and Lynbrook.