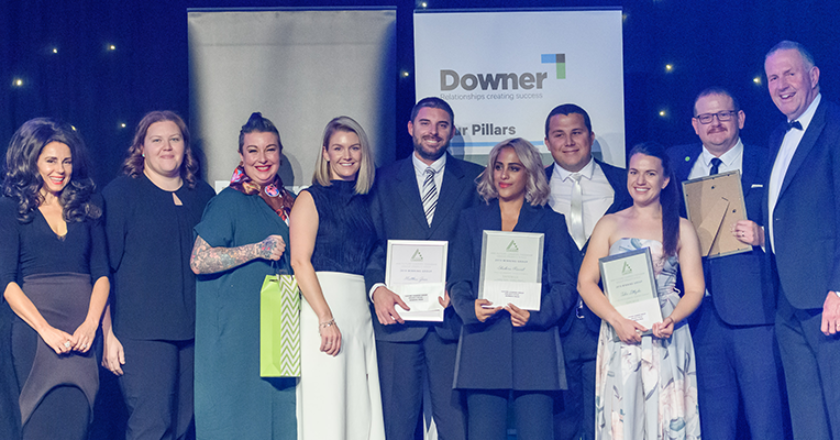 A modern approach to safety during the first and last mile and navigating public transport through the language barrier were just two of the difficult problems tackled by teams during the ARA’s third annual Future Leaders program.

AusRAIL PLUS 2019 helped bring to a close the latest iteration of the Australasian Railway Association’s Future Leaders program, which graduated a cohort of 33 young professionals from seven different Australian states and territories and New Zealand in 2019.

Future Leaders is one of the ARA’s key initiatives in response to the ongoing skills crisis threatening the rail sector’s potential. “Within the rail industry there is such a demand for resources and skills due to the major investment by governments right across Australia and New Zealand in new rail infrastructure,” ARA chief executive officer Danny Broad said when discussing the program in its third year.

To address this, the program aims to build a network of future leaders and provide a two-way exchange between future and current leaders in the rail industry. This higher level of engagement with the next generation of leaders is aimed at retaining them within the sector as they progress through their careers.

The program is delivered in part by Dr Polly McGee, an author and professional training expert who has worked with the ARA since the inception of Future Leaders in 2017.

“We’ve heard a lot throughout AusRAIL about people, and people being the centre of everything we do as a sector. Leading them, inspiring them, and understanding them is key,” McGee told the AusRAIL 2019 audience.

McGee explained the process of the Future Leaders program, which is split into three parts.

“In the first part, we really want the participants to look at themselves,” McGee explained. “Who are they in the mix? What do they bring to their leadership? And what do they need to have as part of their own development to be able to really effectively lead other people, and lead them from any part of the operation.”

This first stage was delivered during a three-day workshop in July. Starting with a Myers-Briggs test, participants learned more about themselves and their personality traits. After an open discussion of some of the wicked challenges facing rail, and drawing on the Myers-Briggs results, six diverse project groups were established to get to work solving them.

“The first phase of the program really helped us look within and see where our strengths were, and maybe where they were not – and how we as leaders can adjust to better manage and work with others based on that knowledge,” participant Shakira Rawat told Rail Express.

“They specifically put us together into groups because we were very different personalities,” fellow participant Tahni Littlejohn added. “Different minds working together with different strengths – you get the best of everything.”

The Future Leaders got together again in September for their second workshop, which kicked off with alumni from past Future Leaders program during a speed networking breakfast.

“One thing that’s really beautiful to see, now that we have these three cohorts graduated, is that the alumni group has become really strong,” McGee said. “Now they’re starting to reach out and support each other, it’s becoming an ecosystem of leadership.”

Following the alumni networking was a tour of Yarra Trams’ Tram Hub and Metro Trains Melbourne’s Metrol facility, a Port of Melbourne boat tour, and a series of major project briefings.

“This program is so essential in the current environment we’re in,” McGee, a certified Dare to Lead facilitator, explained. “What it does
is ask leaders, ‘How do we train you to lead from courage and vulnerability?’ Courage and vulnerability are the two things that are going to be able to take us forward as a sector.

“I’ve never met anyone in rail who said they were in the sector for the brand-new Tesla and the giant house. They’re here because of rail’s legacy, and they come because it’s important to them, so they need to be able to express themselves and be who they are in their roles. The Dare to Lead program gives them those tools, and it puts them in a place of deep discomfort from which they can really learn.”

“The key takeaway for me from Dare to Lead was understanding yourself and having a belief in yourself,” Shez Islam, a senior project manager at VicTrack, told Rail Express. “During the project our group had a number of times where we doubted ourselves, and what we could do. But the self-belief that we had kept us going towards a great result. It was a lifelong lesson that we’ll take with us throughout our careers and in our everyday life.”

“The program is actually quite challenging,” Kelly Iverach, an associate director for workforce planning, train crewing and support at Sydney Trains added. “It asks you to dig quite deep and consider why you are responding to certain situations in a particular way; digging down to find what’s at the core of why we find things challenging, and that’s a different journey for everyone.”

The third workshop occurred the day before AusRAIL PLUS on December 2. The six project teams, having worked together throughout the year, pitched solutions to their chosen wicked problems to a panel of ARA Board members.

“We ask the teams to look at some of the wicked problems of rail, and come up with some really innovative, able-to-be-commercialised ideas, that they can pitch to our panel of experts on the final day of the program, before they graduate,” McGee explained. “We ask them to do something meaningful and real – and the six projects that we had this year were nothing short of extraordinary.”

Helping teams throughout their project were mentors – senior leaders selected from around the rail sector. One such mentor, Robert Angus, technical director for Infrastructure Projects at Aurecon, said the Future Leaders program was helping make the rail industry a better one.

“My focus was helping the team channel and focus some of their ideas and provide helpful guidance and an independent view where I could,” he said. “But ultimately it’s great to see young future leaders across the industry collaborate together towards a common cause.”

SAFEMILE
The winning pitch, voted for by attendees and announced at the AusRAIL Gala Dinner, was SafeMILE, an app concept developed by Matt Green, Tahni Littlejohn, Thomas Pulsford, Shakira Rawat and James Shaw.

The basic premise behind SafeMILE is to use a peer-to-peer ride sharing model to help individuals find companions or groups to travel with.

While relevant to all users of public transport, the SafeMILE team opted to target university students, given they are often financially restricted, and travelling late at night. One study reviewed by the group showed 79 per cent of surveyed female students had experienced harassment, groping or stalking on public transport in the last three years. Another found 90 per cent of female students surveyed in Sydney were not comfortable walking home at night.

The SafeMILE team’s own survey found 80 per cent of respondents had felt unsafe on public transport, and more than 50 per cent said they felt unsafe specifically during the first or last mile of their journey.

When a user selects a journey, they are informed whether there are any other app users taking that same journey. They can then request to join that person – or group, if one is already established – on that journey.

Users can opt for varying levels of anonymity, but are assigned a rating, and can view each other’s level of verification: bronze is a simple email verification, silver is an account connected with a university email address or at least two social media platforms, and gold is an account which has provided police clearance.

Along with its basic purpose, the app also features journey sharing, GPS location, a duress alarm, and an incident reporting service.

The journey sharing feature allows the user to notify people within their ‘circle of trust’ (e.g. family, close friends) the details of their journey, and GPS then keeps those people up to date with the user’s location throughout their journey. The SafeMILE team has also suggested this feature could be linked up with university security, if applicable.

“In cases of duress, there’s a button within the app and on your smart watch, if you have one. Or you can also click your power or volume up button four times, and this will send an alert to your circle of trust, as well as campus security, or to public transport security, depending on your location,” Shaw, a senior systems engineer with Calibre, explained during the pitch.

“Separately the incident reporting feature allows users to report areas or sections of their trip where they witnessed threatening behaviour or felt unsafe, and this information can then be shared with other users of the app so they can make informed decisions about their journeys home that night.”

Littlejohn added: “That data can also then be used by public transport users or universities to target unsafe hotspots, and focus their resources most appropriately to address them.”

The SafeMILE team was at AusRAIL pitching for a $250,000 investment, which they believed would help them deliver a user-ready app, and invest in targeted advertising to help develop a starting user base. Revenue would come from in-app advertising.

Using Bluetooth beacon technology, an app would help users navigate stations and concourses in their native tongue. Beacons would be set up around a station and used to trigger alerts via the app on the user’s phone.

“We spoke with both transport operators and effective users, and 96 per cent of those users said they would use an application like this while on transport here in Australia. 88 per cent of operators agreed this would improve ticketing and 100 per cent agreed it would improve wayfinding,” Hargraves, an infrastructure response team leader at Metro Trains, outlined.

Hargraves explained when you combine the 800,000 Australian residents who speak little to no English, with the 13 per cent of the average eight million annual tourists visiting Australia who are in the same boat, there is certainly a substantial target audience for this product.

HEADING INTO 2020
The ARA has announced plans for the 2020 edition of Future Leaders. Nominations will open in mid-March, ahead of a trio of planned workshops:

RUNNER UP: Transport Assist Australia:
A multi-lingual application to make navigating Australian railways simple and efficient for everyone.