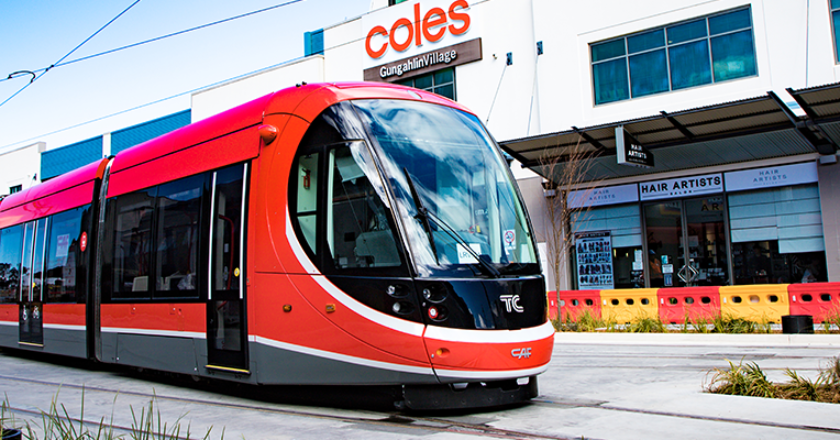 At the ARA’s Light Rail 2020 conference, chief projects officer of Major Projects Canberra Duncan Edghill outlined how the Canberra Light Rail has become part of the fabric of the city.

For successful rail transport projects, looking back on a project once it is complete can reveal insights into a project that were not apparent in the busy construction phase.

For the Canberra Light Rail project this was no different, as chief projects officer of Major Projects Canberra, Duncan Edghill, highlighted in a recent speech to delegates at the Australasian Railway Association (ARA) Light Rail 2020 conference.

With stage one being the largest infrastructure project ever undertaken by the ACT government, the light rail generated an intense community discussion throughout planning and construction phases, however now in operation, the city has taken to the service with gusto. With a year now under its belt, the initial case for the project has not only been met, but exceeded.

“As an example, in the first three weeks of 2020 versus the same period in 2019 there was an increase of over 10 per cent of public transport journeys taken across the ACT,” said Edghill.

“It’s quite a step change.”

Prior to the project, Canberra was only served by a bus network, even though trams were included in Walter Burley and Marion Mahoney Griffin’s plan for Canberra. Such a change in transport infrastructure meant that the project was focused upon by the local community and businesses, meaning that every decision of the project team was on full display. In addition, the project ran along a major road artery, leading it to intersect with many residents’ lives before operations began.

“When you’re building light rail and it’s spread out over many kilometres, everyone can see what you’re doing,” said Edghill. “As we move into future stages, we will need to give consideration to issues like, ‘How will this shade cloth that we’re putting up now look in two years?’ and how do we pay attention to things like controlling weeds?”

On a commercial side, with further stages planned for the future, being delivered as a public-private partnership meant that the eyes of the infrastructure business community were also on the strip of Northborne Avenue which the light rail would run down.

“The overall commercial focus was really a genuine desire to treat the project as a partnership and to be seen as a commercial and pragmatic partner,” said Edghill. “We want Canberra to be the sort of place where you can come and do business with confidence and with a reasonable partner.

“Of course, in pretty much all big projects claims arise, but a real positive for both sides here was when we get to operations we cleared the deck of any outstanding commercial matters. Given the complexities of starting a light rail system for the first time it was really important that we focus on the important thing, which is getting the operations right rather than dealing with commercial issues [after the project opened].”

Another decision made at the beginning of the project came from the political side, but was instrumental in ensuring the project’s future success, said Edghill.

“The ACT government had resolved signal priorities for the light rail vehicles (LRVs) on an intersection basis. That was a decision that was taken in cabinet because it was a policy decision at the outset to provide LRVs with high levels of priority at intersections.”

Combined, these decisions led to a system that, now into its second year of operating, has surpassed initial hopes.

PROJECT INTEGRATION KEY TO LIGHT RAIL SUCCESS
When designing and building the light rail Stage 1, the delivery partners were also able to consider the wider impact that the project would have, and how to integrate these for the best outcome for the city as a whole.

“In Canberra’s case, the introduction of light rail actually led us to revisit the fundamental principles underpinning the entirety of the rest of the transport network,” said Edghill. “Before light rail we had a bus network where mode share is less than what we’ve targeted – long circuitous bus routes, sub optimal network frequency, a few very high capacities frequent routes and then a school bus system.”

In line with the opening of the light rail line from Gungahlin in the city’s north to the city centre, Transport Canberra redesigned the bus network to have higher frequency services on key corridors. Edghill noted however that the process will never be without its critics.

“There are some key lessons to draw from this process; you can’t begin consultation early enough, you’re not going to please everyone, and you will have to make some tough decisions. There will be those who in time benefit from the system, but they’re not the ones who are going to be writing letters to the editor now.”

With an entirely redesigned bus network, comparing a before and after is not like for like, but Edghill is confident that the changes have had a positive impact.

“What we have seen, on an aggregate level, is public transport has risen across the network. We introduced six new high frequency bus routes at the same time light rail was introduced and the high-speed bus network has proven to be really popular.”

Outside of the transport network, the impact of a light rail project on the businesses along the route has been a key concern for other projects. In Canberra this was no different, and the light rail work coincided with a number
of developments along Northbourne Avenue, causing disruption to nearby business owners.

“When you’re living in project world, it’s really easy to focus on your own project, but from the perspective of a business owner or a shop owner they don’t’ distinguish between your project and another project,” said Edghill. “At Gungahlin the light rail project coincided with a number of other construction projects.”

DESIGN DRIVING OUTCOMES
Having weathered the impact of construction, businesses are now embracing the light rail, said Edghill. Although not a scientific study of impacts, Edghill recounted examples of tea towels, paintings, and coasters now with the light rail imprinted upon them. For those that worked on the project, these are examples of where the project has gone beyond what could be quantified in the business case.

“People ask what makes me most proud to be involved in Light Rail stage one project? Is it the patronage, which is going gangbusters, the corridor development we’re seeing, is it delivering it on time and under budget? What is it that gives me the greatest satisfaction? All of these things are important of course but I think what actually struck me most is the fact that light rail has already become a shorthand for Canberra.”

Edghill puts this down to the nature of the project and its commitment to good design.

“The canopies are distinct to Canberra, the artwork is bespoke at each stop, the colour palette subtly speaks to Canberra institutions, the LRV seat livery was designed by a local Indigenous artist, the dynamic lighting allows us to change the lighting to different colours in response to local events, and there’s a high quality of workmanship.”

While these features could be seen as optional extras, Edghill counselled that the design elements are what defines a light rail project well after construction has ended.

“We all avoided the temptation to engineer out the project’s design qualities and I think that’s a very important lesson,” he said. “These projects obviously represent a very significant investment, and long after people stop thinking about the cost we’ll be thinking about the system and ultimately smart architectural design is a small part of the overall investment.”

In the end, Edghill says, the light rail project is not just about mobility.

“One of the most important things that we tried to keep in mind when embarking on the light rail project was recognising that it’s not only a transport project. Yes, light rail moves people from A to B and that’s undoubtedly of great importance, but just as importantly it shapes how our city looks and shapes the development of the light rail corridor.

“No matter how successful patronage will be, there will always be more people looking at the system than using it. For that reason, the final design of the system is something that is particularly relevant.”

These design elements will be continued as the ACT government looks to the next stages of the light rail project. As Stage 2A progresses to the waterfront, stage 2B then continues to Woden, and with plans for further extensions on the East-West spine of the city, ensuring that the light rail project remains integrated, and well-designed will be key.

“Light rail is really about servicing the future development of the Acton waterfront and convention centre and other things that will come to the centre of Canberra in time,” said Edghill.

“The project is as much about urban regeneration as it is around transport.”