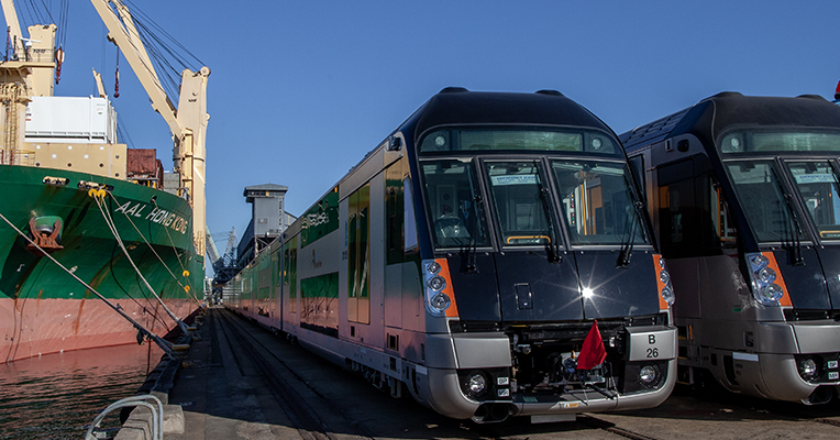 The first delivery of the second order of Waratah Series 2 trains have arrived at the Port of Newcastle.

The trains are the first of 17 new Waratah Series 2 trains to expand the Sydney Trains fleet. The increase in trains is part of the More Trains, More Services program.

Minister for Transport Andrew Constance said the need to have more trains was due to rising patronage.

“Over the last few years we’ve seen a rapid growth in the number customers travelling on the rail network which is why it is important we invest in new infrastructure, including new trains,” he said.

Once the full fleet is operational on the Sydney network it will take the number of Waratah Series 2 trains to 41. The extra order was announced in February 2019.

Once the trains arrived at the dock, they were able to be placed immediately on rail lines adjacent to the ship. The rest of the 15 trains will be handled in this way over the next eight months, said Port of Newcastle CEO Craig Carmody.

“Newcastle has a key advantage in being able to unload this type of rolling stock cargo directly onto rail lines immediately next to the ship, without the need for any unnecessary truck movements.”

A Newcastle Stevedores spokesperson said that the team enjoys the challenge of this style of cargo.

“We are delighted to facilitate the discharge and initial consolidation of the second stage of the project. The unique nature of West Basin, with direct under hook access to network connected rail, lends itself perfectly to rolling stock imports.”

The trains will undergo testing and completion works in Cardiff and will then be hauled by locomotive to the Auburn Maintenance Centre. Testing there will ready the trains for the Sydney network.

“Most of the testing will take place at night and across the weekend to minimise the impact on customers,” said Constance.

The trains are manufactured in a joint venture between Chinese manufacturer CRRC Changchun Railway Vehicles and Downer Rail. The vehicles are assembled in Changchun before testing and commissioning is conducted in Cardiff, near Newcastle.