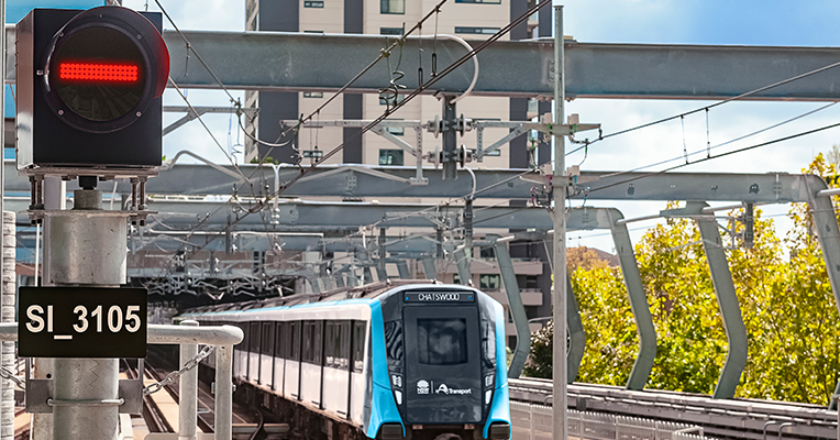 Required to develop a unique solution for a challenging requirement, Aldridge have implemented a smart signal built for the future.

Across the vast majority of most train networks, most signals have the sophistication of a light bulb – the signal is either on, or off. The increasing sophistication of new lines, and their requirements to deliver more in a smaller package, has required a new kind of smart signal.

Sydney-based rail signalling experts, Aldridge have developed a new smart signal which can provide a much greater amount of information in a tight environment. Already in use in some of the most advanced systems in the Asia-Pacific region, David Aldridge, managing director of Aldridge, explains what makes these signals smart.

“In a conventional signal, you might have an A or B on it, and then if you need to put a C on there you can’t do it; you need to build a whole new signal. This one you can reprogram to show an A, B, C, D, or whatever, that’s the difference – their ability to be able to generate all characters.”

The new signal can decode up to 10 110VAC selection inputs and generate a comprehensive range of alphanumeric characters and symbols on displays up to three digits wide. This solution was developed in house, as company engineer Craig Sharwood highlights.

“I can change a lot of the behaviour of the display that previously would be locked in hardware and any change would require a major change to circuit boards and documentation. Here I can just change the code that controls the signal and change an A to a B or a 1 to a 5.”

The flexibility of the signal does not end at the display, however, as it can be configured with any number of interlocking systems and has already been installed in divergent projects.

“The structure of the signal is such that I can adapt it to be compatible with whatever interface I have to connect the signal to,” said Sharwood. “it gives us some flexibility to make it talk and in whatever format that the customer would like.”

A PROVEN SOLUTION
The smart signals were first developed to be used on two projects in Southeast Asia, the MRT Purple Line in Bangkok and the KVMRT system in Kuala Lumpur. For both systems, Aldridge had to comply with the customer’s demand for a new kind of signal.

With the technology proven on these projects, when the call came for a similar signal for the Sydney Metro Northwest project, Aldridge was able to supply their solution.

“We’d already designed the product for the two other projects in Asia,” said Aldridge.

“We had the technology running and then we reproduced it here using the same technology.”

Although the core technology was the same, the signal had been improved as a result of previous versions, giving the product an edge over other solutions, said Sharwood.

“We have refined it over several iterations with other clients, so it’s given it maturity as a product. It’s not just a drawing board situation, it’s something that’s in service.”

While the product had been updated, the size of the kinetic envelope on the Sydney Metro lines presented a new obstacle for Aldridge to overcome.

“One of the challenges was the actual size that they gave us which we had to bring the product down to, to miniaturise it,” said Aldridge.

“A normal signal here in Australia, or basically anywhere in the world, is 300mm in width and these had to brought down to 270mm.”

In bringing down the size of the signal, Aldridge also developed the system to be modular, so that it could continue to fit into the diverse requirements of each future rail project. For Sydney Metro, the signals combine a points position indicator, which indicates left, straight ahead or right, with a red horizontal bar for stop, and a separate main route indicator number. The two displays are electrically isolated, and the arrangement can be modified for the variation required.

“Every company has their own interlocking system – they’re all a little different – and then they also have different group requirements for reporting back to the controller from the signal, what happens in fail mode, and all those little parameters,” said Aldridge.

Being able to approach each project on its own terms with an applied solution that can be modified to fit has allowed Aldridge to step in on projects when other have pulled out at the last minute.

DESIGNED TO BE SAFE FOR FUTURE APPLICATIONS
Currently, the signal is used as a non-vital signal on the Sydney Metro network. Aldridge has delivered 153 signals, including 55 smart running, 26 smart shunting, and 72 buffer stop signals, across the Sydney Metro project so far. Although automated, the system requires signals for manual operations, including shunting, that must be fully operational when the Metro is running.

As part of the safety measures in the signals, the two separate indicators can be monitored independently, while also performing their own self testing in a loop configuration.

“The most recent model is a higher safety integrity level (SIL) level than the original, so it monitors its own power supply and it monitors its outputs. It has a status output to say basically ‘I’m ok or not ok,’ so it’s not a signal that can be used for controlling, generating a stop, but it has sufficient reliability and controls built in to make it more than adequate for this non vital application,” said Sharwood.

While the current signal is not being used to convey a movement authority, the fundamentals of the system are such that further deployments could use the signal in what Sharwood terms a hybrid manner.

“The Aldridge smart signal has the potential to displace a lot of normal signals. Rather than just displaying characters in the array, on the same array it could be displaying signalling information.

“At the moment we’ve kept it separate, the smart signal is displaying digits and characters and we still have more conventional bar signals, but it’s possible with the right approach that we could have characters and arrows, bars, all sorts of different types of signalling, embedded in the display.”

THE ALDRIDGE DIFFERENCE
The development of the innovative smart signal required a different set of skills than what is normally required of a signal engineer, however just as mandatory was the existing expertise Aldridge had in hardwired signals.

While the 5mm LED lights and other componentry may have resembled existing signals, there was a considerable amount of new thinking involved in the design.

“These signals bear almost no resemblance to any predecessor signals so in a lot of ways we had to start from scratch and basically design something completely new,” said Sharwood.

Pulling this exercise off however required belief from the top down.

“A lot of industries like rail get stuck with the things they know and the things that work over and over and suddenly that isn’t enough” said Sharwood.

“At some stage we have to go, ‘Ok, I have to make a big leap into modern technology.’ That’s what Aldridge did in this case.”

This approach is where Aldridge has been able to distinguish itself in its ability to find the right solution, with 70 years of experience and 30 within the rail industry.

“In general, we lead the customer a little bit in terms of what could possibly happen,” said Sharwood.

“They look to us to say, ‘How do we actually use this signal?’ Even down to the point of what size fuses should be used, what earthing should we have.

“Sometimes we assist the customer on their side of the fence to help them integrate into their network, and into their systems,” said Sharwood.