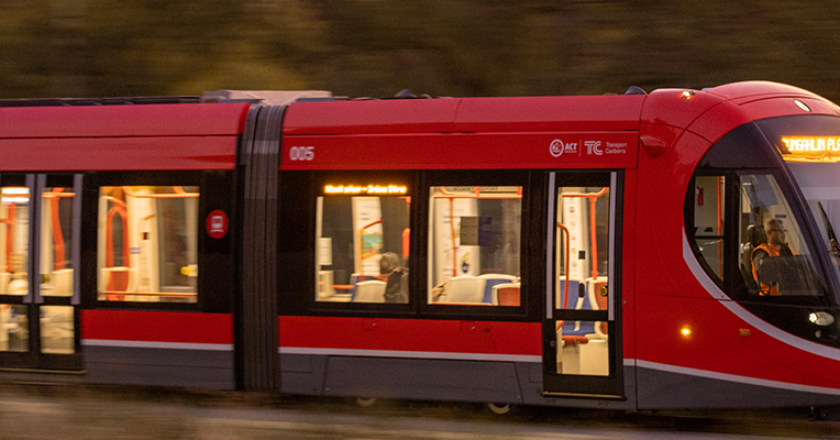 In one of the most disruptive events to occur since World War Two, transport leaders around Australia highlight the role that rail has played in getting Australia through COVID-19.

On Friday, March 13, thousands of spectators were queueing outside the gates to the Formula One Grand Prix in Albert Park, Melbourne. The late summer sun was beat down on the spectators as they waited for two hours to find out whether they would be let in. Finally, organisers confirmed that the event could not go ahead because of the fear of an outbreak of coronavirus (COVID-19). Extra trams were rapidly mobilised, and the crowds were herded onto public transport to take them back home, via the Melbourne CBD.

At the Major Transport Infrastructure Authority (MTIA) offices on Exhibition Street, director-general Corey Hannett was assessing the options for the state’s $70 billion of under- construction transport infrastructure spread across 119 major road and rail projects.

“I must admit, when the pandemic turned up in March, I think there were doubts that industry could work,” Hannett told Rail Express.

“At that time, we were looking right around the world at what was going on, and it was very clear that lots of countries were actually closing down.”

Unlike countries in Europe and Asia, at the time, the impact in Australia was relatively limited, with only 156 cases when Albert Park closed its gates. In Italy, deaths were already in the thousands.

“At the time, we really hadn’t had that massive impact from the COVID-19 infections that the rest of the world was experiencing, but it was fair to say we were very concerned that we had to make sure that we did things in a way that protected the workforce and the community,” said Hannett.

Across all of its sites, the MTIA and its delivery contractors put in place procedures to reduce the change of an outbreak at a construction site. Workers had to be spaced more the 1.5m apart, personal protective equipment was required, and extra hygiene measures were put in place. MTIA’s own staff moved to working from home and staggered shifts were enforced on work sites.

All in all, roughly 18,000 people are employed to build road and rail projects under the MTIA umbrella across Melbourne and in regional Victoria. As of the end of June, there have been no significant disruptions to any of the construction programmes.

“I’m quite pleased to say so far so good, but we can only be as good as we are today and we need to keep that vigilance up and keep a heightened focus on making sure that we comply with the relevant rules to keep the community the workforce and ourselves safe.”

Hannett notes that while there has been a small loss in efficiency, the building program is continuing apace.

“In general, the program is in pretty good shape considering the pandemic which was forced upon us in March this year,” he said.

“I can’t imagine what the situation would be today if we had not had our 18,000 plus people not working.”

KEEPING THE COUNTRY MOVING
Canberrans had barely gotten the smell of bushfires out of their hair, clothing, and homes by the time the COVID-19 pandemic hit. After a torrid summer, Canberrans were using the newly commissioned light rail more than ever, which, according to ACT Transport Minister Chris Steel, led to an unexpected windfall.

“Thankfully in February this year, just prior to the pandemic starting, we actually increased the frequency of light rail to help manage the crowding that we had seen because we had so many people wanting to use light rail in Canberra.”

Frequency in the peaks was increased, and the peak period was stretched to 9.30am in the morning and 6.30pm in the evening. This extra capacity meant that the light rail could keep running and ensure that those workers who did need to travel were able to get to their jobs and people were able to access essential services during the lockdown.

To ensure the service was safe, a rapid program of adaptation was rolled out.

“We stepped up hygiene measures across public transport, including light rail, and one of the measures on light rail was to have automatic opening of the doors which wasn’t always the case on light rail,” said Steel.

Across the network, an extra 1,300 hours of cleaning was being conducted per week, and regular cleaners were assisted by over 30 workers hired by Transport Canberra who were stood down from their roles in the wider transport industry.

In Canberra and across Australia, most transport authorities are still encouraging passengers to travel outside of peak periods to avoid crowding. At the same time, Steel and others are concerned that road congestion is rising faster than public transport levels with the ACT at 85 per cent of pre-COVID traffic levels but public transport at less than half.

“We don’t want to see congestion reach even higher levels than it was before the pandemic because people are not using public transport, so we do need to encourage people back at an appropriate time,” said Steel.

“We’ve had for now several months the national cabinet and state premiers and chief ministers very clearly indicate to the community that they should avoid public transport during peak times and that is still the message.

“We also need to have an equally strong message at the appropriate time to welcome people back onto public transport – come and use it, it’s good for our community, it’s good for your health, it reduces congestion and all of the benefits that it provides.”

In Sydney, Howard Collins, chief operations officer for Transport for NSW and former chief executive of Sydney Trains cannot see a future where a return to public transport does not occur in some form.

“I just look at the maths and say we’re currently carrying 600,000 journeys across the transport network, about 350,000 people every day at the moment, compared with 1.3 million on rail before COVID. Where are those people – even if half of them come back – where are they going to go? I can’t imagine them all cycling down George Street. I can’t imagine we’ll get the cars moving more than about 5km/h if they all jumped in their cars. So, rail will have to take on that capacity, but it may be in a different context in terms of how we operate our train service.”

Prior to COVID-19, capacity on Sydney Trains was almost reaching breaking point, particularly in the peaks. With a 73 per cent drop in patronage, Collins is looking at the recovery from COVID-19 as a potential for change in the way the network operates.

“I think patronage will change, permanently. COVID-19, at the end of the day is an issue that has come along that has been really tragic and has been challenging, but it may well be a warning for things happening in the future. So, things have to change but I do believe that public transport and particularly rail is going to still have a major role.”

Collins is sceptical that there will be a wholescale shift to alternative working arrangements, such as working from home.

“Many people have said ‘Oh I’ll never going to be going to office anymore. I’m going to be working from home and I’ll be doing it in a café or bar or whatever it is.’ I do think there’s this human nature of getting together and while we all say we’re coping with Teams and remote working there will be a resurgence of people wanting to cluster and get together, whether that’s socially or for work reasons no matter how good our Zoom or Teams structure is. People will be back, but it will be different.”

During the lockdown, Sydney Trains has increased services during the peak to cope with demand, as well as run extra light rail services. With an unclear future still ahead, to many, what this has demonstrated is the need for flexibility in time-tabling and capacity.

“We certainly need greater flexibility and if you look at Sydney Metro, boy they can switch on and off a flattening peak or an increased fleet just by the press of a button, and the trains pop out of their depot without any care or concern,” said Collins.

“But we know that people still need to travel within certain times. If tradies still sign on as they do every day in Sydney at 7 o’clock then we’re still going to get that massive tradie peak. If schools still operate in the time scale that tends to suit both their parents and teachers, you’re not going to see the flattening of the peak. We will certainly see others spreading the load – particularly office workers – but I think it’s going to be more resistant to change than perhaps some of the theorists believe when it comes to peak services.”

WHAT HAPPENS NEXT?
Many have noted that COVID-19 is two crises. First, the health pandemic, and second, the economic crisis caused by the shutdown of businesses and the restrictions on movement and gathering. While testing, contact tracing, and medical care can limit the first crisis, there is more debate over how to grapple with the second.

Infrastructure spending has emerged as one way that governments are dealing with the economic crisis. Rail is one area of infrastructure that has been targeted with spending. Already, in Sydney, Metro Greater West, now known as Sydney Metro – Western Sydney Airport has had funding committed by both state and federal governments, to begin construction before the end of 2020. Approvals for Inland Rail have been fast- tracked. In Victoria, the Level Crossings Removal Project is ramping up and extra money is being spent on regional track and repairs to stations.

While some have argued that smaller infrastructure projects provide more benefits, according to Hannett, all projects should be seen as helping the wider economy.

Shadow Infrastructure Minister Catherine King highlighted that now is the time to invest in nation-building infrastructure.

“I think that one of the things that coronavirus crisis has shown us is that while we’ve had infrastructure projects and rail projects, we’ve sort of lacked any large scale, iconic infrastructure transport project,” she told Rail Express.

In May, Opposition Leader Anthony Albanese reaffirmed the Labor Party’s commitment to high speed rail from Melbourne to Brisbane, via Sydney and Canberra. According to King, such a project goes well beyond reducing congestion on the air route between Melbourne and Sydney.

While COVID-19 has been a tragic event, the rail industry is beginning to emerge with a renewed focus on flexibility in operations and the nation-shaping role that rail infrastructure can have.