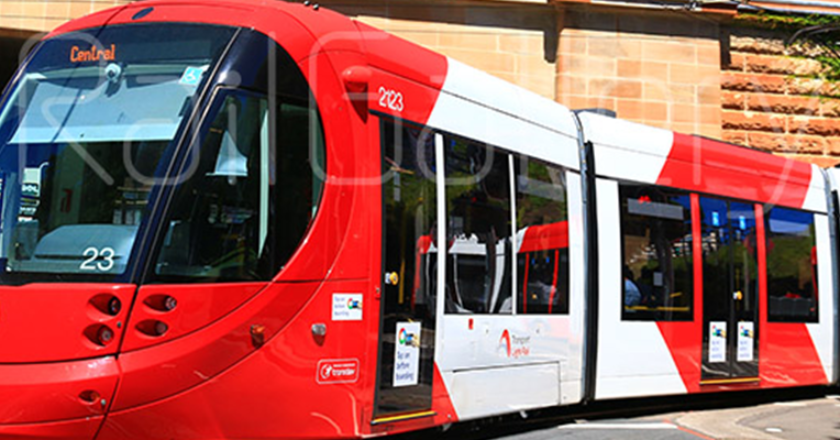 “The boundaries of light rail no longer stop at the edge of the world’s CBD,” Yates said. “It is utilised almost everywhere because it calls for practical inventiveness.”

Yates explains how light rail does this. “With or without guidance rail tracks, light rail needs to be able to adapt.”

“It needs to move sideways, to pick up passengers, and to get out of the way of other road users, including during pause duration cycles when recharging might be needed, be it via rapid battery swaps, zapping super capacitors or refilling with hydrogen for the fuel cell vehicle propulsion power.”

Further, capital costs for fixed platforms are no longer needed because drop-down or pop-up ramps provide better accessibility, contributing to ever leaner operation.

“For some, the air-conditioned waiting areas add to the whole experience, but this is innovative in that air can be exchanged with the light rail units during a short stop cycle. There is no longer the need to carry the physical weight and provide power to the rail car air conditioning.”

“This can work with the normal vehicles as well as driverless ones, which can learn on the move. For example, when encountering potholes, they can automatically direct the following wheel sets to avoid the hurdle. The light rail set can then instruct the next approaching service to avoid the same potential interruption, so the whole system works together for better outcomes.”

The technology which allows light rail to interact with its operating environment can also be applied to heavy rail operations, according to Yates.

“Long loaded trains can be subject to gradient changes and side wind loadings, that impact adversely and lead to rapid track wear, and lowered efficiency. By examining IoT data from the sleeper loadings, an optimal train speed can be transmitted to the train control system, leading to minimal track damage, optimal safety and efficiency. Learning from light rail engineering has bottom line gains for heavy rail operations.”

Committed to innovation, Columbus Group has won three Australian Mining Prospect Awards since 2014. The engineering firm’s initial win was for an Innovative Mining Solution featured a flexible additive 3D printer. According to Yates, 3D printing can be applied to all aspects of light rail.

“Starting with the light rail core rail cars, the new generation of 3D printers can produce an integrated package with a mix of materials, including various metals with fibre-rich panels for lightness and structural frameworks for strength. Previously, such complex assemblies would result in substantial build costs that could incur considerable time penalties,” Yates said.

“With 3D printers, innovative design is possible for a range of assemblies, from regenerative brakes to comfortable seats. Access facilities are also possible, as are smarter batteries for a compact physical size and extended range as needed.

“3D printers can produce the permanent ballast structure that works with the one- piece track for rapid installation of both long operating life and short-term access rail services, particularly where mining operations are the core activity.”

Yates uses the old Tier 3 rail networks of Western Australia as an example. Prior to World War II, the track did not have the level of maintenance to safely allow heavy diesel engines and their concentrated considerable axle loadings.

He points out that light rail practices were taken up to replace the diesel
engine at the front of a string of grain wagons with distributed drive lightweight assemblies along the whole length of the trains, possibly supporting load carrying containers. The resulting axle loadings were considerably less heavy, so that adding the appropriate suspension systems to such distributed drive units made it feasible to utilise the Tier 3 networks without necessitating major corrective repairs to the infrastructure.

“Taking the same approach as the Tier 3 solution for grain movement, it is possible to transport products like iron ore, keeping within the feasible axle load limits. Mining companies and track owners get improved utilisation just by viewing the situation through ‘light rail’ glasses.

“The light rail approach includes changing the input energy sources to match the power demands of a lower weight train system, be it in the country, on a coal mine or even the city. In CBDs and suburbs, the take up of renewables, now complemented with battery systems, is making what are distributed power systems more popular.

“It has been considered that even the simple storm water pit found in most streets to reduce localised flooding, can be retrofitted with solid state 24/7 geothermal energy extraction that does not depend on the wind blowing or the sun shining to produce reliable power for adjoining microgrids and passing light rail infrastructure.”

Yates concludes that light rail can operate like a “battery on wheels”.

“It could operate by moving energy from a recharge point to an area in need of battery boosting on a demand basis, generating automated cost offsetting revenues without even being noticed.”