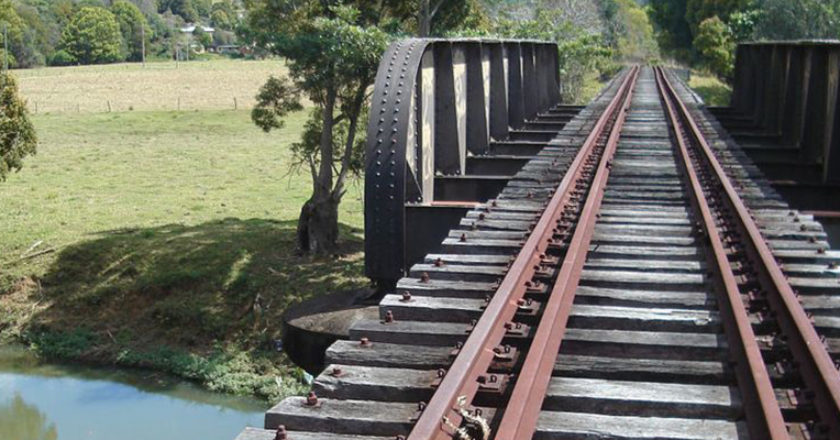 Rail services to Murwillumbah in New South Wales were discontinued in 2004, but now there are plans to re-open the rail line.

Byron Shire Council is moving forward with planning for a rail link connecting Mullumbimby and Byron Bay as part of a multi-use activation of the rail corridor.

Five of the seven councillors who attended the council meeting on Thursday, March 26 voted to start the planning process to establish a project framework and to progress a business plan.

Councillor Basil Cameron said it’s time to take a significant step forward in meeting the transport needs of the shire.

The motion follows a $330,000 study for multi-use activation of the corridor, the Arcadis Multi-Use Rail Corridor Study (MURC).

Cameron said for the section between Mullumbimby and Byron Bay the estimated costs for Hi-rail with walking and cycling are $12.6 million.

He stated that Hi-rail is the lower cost option with the lightest axle weight therefore requiring minimal upgrades to the disused lines. It is also very flexible as the Hi-rail vehicles can switch from rail and road in 15 seconds.

“Typically a Hi-rail vehicle is a small bus able to service a more flexible route or on demand type service. Travelling along the rail corridor provides a faster entry to town centres during peak time and assists in reducing vehicle numbers on the road network,” Cameron said.

Andrew Pearce, traffic engineer, infrastructure services Byron Shire said in the notice for motion that background research undertaken for the Integrated Transport Management Strategy acknowledges the Multi Use Rail Corridor Study identified a Hi-rail system within the rail corridor in combination with active transport is the best rail corridor option.

If the council proceeds with the Hi-rail option there is likely to be the need to construct a new, accessible rail station.

Council will now provide notice of the intention to establish a rail link to Infrastructure Australia, Infrastructure NSW, Transport for NSW and other relevant agencies to seek advice on funding criteria and project development.

In a notice of motion prepared prior to the meeting of council, Cameron wrote that  activating a rail link within the Ewingsdale corridor provides an affordable alternative to start shifting demand from ever bigger, busier, and more expensive roads.

As part of the planning process, council will investigate Federal, NSW and other funding bodies to identify funding sources including, but not limited to tourism, infrastructure, transport and climate change mitigation/adaption grants with a priority focus on funding vegetation removal within the rail corridor.