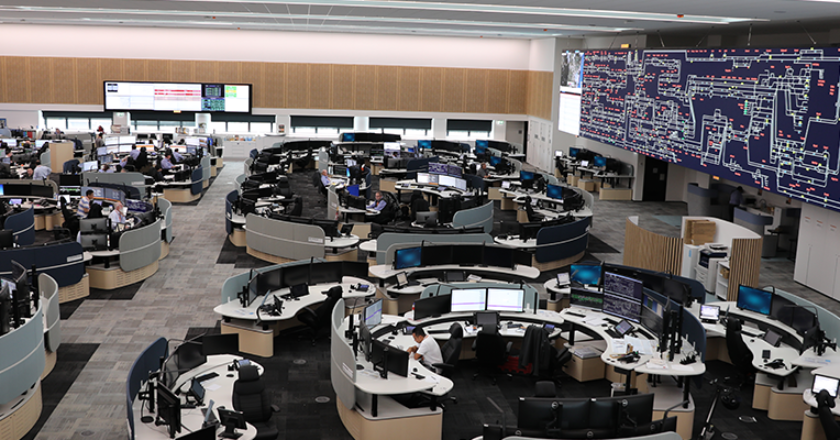 At dawn on April 25, 2020, the Last Post played out at every train station in NSW. While regular Anzac Day services were called off due to coronavirus (COVID-19) restrictions on public gatherings, essential staff working for Sydney Trains and Transport for NSW paused to remember those who had died

in war as the Last Post played across the stations’ public address systems.

This was the first time that the bugle call was played at the same time across the Transport for NSW network and was made possible thanks to a centralised audio system that tm stagetec systems has recently installed for Sydney Trains.

In addition to the Last Post, 100,000 announcements are played every day across the system, which is orchestrated from the Rail Operations Centre (ROC) in Alexandria, which was opened in 2019. As Mark Lownds, general manager of tm stagetec systems explained, the centralised operations centre also brought together audio announcements that are played out around the network.

“As part of the project, Sydney Trains wanted to centralise a lot of the operation of the system and a big part of that was to put all of the controls of the audio systems into the operations centre.”

From the ROC in Alexandria, operational staff can make announcements to individual platforms anywhere in the system, as well as state-wide announcements. This is in addition to scheduling regular announcements.

Previously, just as rail operations were controlled from a number of separate centres, so were audio messages. tm stagetec systems had been involved in these legacy systems, so they were able to adapt to the new version.

“We’ve had part of this infrastructure in place for five years,” said Lownds. “Before the ROC, Sydney Trains had all these separate facilities, so we had little bits of systems here and there with different teams, but the difference here was to centralise it all and by doing that we use a lot less infrastructure but also get a higher availability. From a technical perspective that was quite good because it means a lot less physical equipment to get a better outcome.”

Planning for the ROC began in 2016, when the $296 million facility was first announced.

The complexity of the system was such that design choices were made down to the individual desks that rail operators would work at. Rail management, infrastructure control, security, and signalling were all brought together, meaning that effective communication between the centre and the entire Sydney network was key. To enable this to happen, tm stagetec systems were brought in early to effectively design the audio infrastructure highlighted Clive Dong, solutions architect.

“Even when they were doing the architectural and building design, we had the opportunity to talk about how we would integrate the systems and how we could ensure that it was going to work and meet all the requirements that Sydney Trains had,” said Dong.

Sydney Trains and tm stagetec systems held discussions over where to run fibre cables, making sure that there are redundant connections back into the rest of the system from the ROC, power back-ups, even down to locations for physical racks and equipment space. These early discussions meant that by the time the facility opened, Sydney Trains was able to streamline audio announcements to improve passenger communication.

“The ROC has separate power, separate fibre connections directly back to their core system at Central. Everything is fully redundant, and then they run dedicated fibre to each of their operational desks,” said Dong.

In addition to being able to schedule safety and generic announcements, such as no smoking announcements, Sydney Trains has recently used the system to communicate to customers the COVID-19 physical distancing guidelines as the transport operator has rolled out its “no dot, no spot” campaign.

As part of the overall audio package, tm stagetec systems installed a small recording booth within the ROC so that the quality of announcements is maintained.

The ROC also has some role in directing train movements outside of Sydney Trains.

In this case, audio announcements needed to be heard beyond the Sydney metropolitan network. This presented a challenge as there were no dedicated fibre connections between the ROC and regional stations. tm stagetec systems enabled operators at the ROC to make announcements over the telephone line as well to service remote locations.

“We can play an announcement to the entire state at any station and any time, live,” said Dong.

To control the system, tm stagetec systems used a web-based, graphical user interface (GUI) to make the system easy to use and flexible. Audio is distributed between the ROC and speakers on the Dante Domain Manager platform, an audio-over-IP platform developed by Australian digital audio networking technology leader, Audinate. According to Lownds, the system tm stagetec has installed is the largest Dante network in the world, larger than public address systems to hospitals, campuses, and stadiums. The system avoids the need for lengthy reams of analogue cables and is designed to be secure.

“We had to ensure that this was a very robust network because audio announcements to an entire network is something you don’t want somebody to get a hold of that shouldn’t,” said Lownds. “So, just in the ROC, we have two separate, discrete fibre runs to make sure that if there’s a problem with roadworks and a fibre gets cut then we can still get the system running. All the backend equipment is duplicated and fully redundant, so if there is a failure, the system will actually keep working, without interruption.”

In addition, the system is able to be monitored down to the speaker, in real time, to know if there are any faults.

The sophistication of the system also enables Sydney Trains to do more with their audio-based information. Working with tm stagetec systems, Sydney Trains is rolling out integration of the audio-over-IP network with audio frequency induction loops (AFILS). This means that the audio played out over the loudspeakers at a station is transformed into an electromagnetic field, which can be picked up by a hearing aid or listening device. Other areas that are being explored include mobile-based functionality so that staff on the ground have access to the audio network.

Across the entire network, the technology would only be useful if the sound that is being transmitted can be understood, and a key requirement of the project is meeting strict sound intelligibility standards measured as a speech transmission index (STI) from 0 to 1, with 1 being excellent intelligibility. Sydney Trains mandated a reading of 0.75, or excellent, without a train on the platform and 0.6 with a train. Now, the team has achieved that, with a delay of only five milliseconds between the announcement being made at the ROC and the audio being heard across the entire Transport for NSW network.

While Anzac Day commemorations may be held differently in 2021, the clarity of sound across the Sydney Trains network will be exactly the same.