Alstom Australia’s managing director Mark Coxon sat down with Rail Express after a whirlwind 2019, with big wins for Alstom across multiple states and sectors.

The New Year’s break is a welcome opportunity for rest and relaxation for many professionals. But for Mark Coxon and his team at Alstom Australia, the 2019/20 break was perhaps the most well-earned in recent memory.

Eleven days before Christmas, Sydney opened quite a large present. The first revenue services for the Sydney CBD and South East Light Rail line between Circular Quay and Randwick represented the culmination of four years of construction and delivery.

Around 160,000 passengers rode the new line in its first two days, and they rode on some of the 60 Citadis X05 light rail vehicles delivered by Alstom.

By January 8, the line had already handled its first million passengers.

“The Alstom scope has been on time, and we’ve had new technologies brought for the first time to Australia – another sign of confidence in the Alstom delivery capability.”

Light rail vehicles are rolling down George Street for the first time in more than 60 years. Unlike the original system, it is free of overhead wires for two kilometres of its route thanks to Alstom’s ground-based APS power supply.

APS, originally Alimentation Par le Sol – “fed through the ground” – but now anglicised to Aesthetic Power Supply, uses modern technology to safely feed power through the base of the LRV via a third rail between the tracks.

Coxon notes APS is a new technology in Australia, but also that the Citadis X05 is the latest version of Alstom’s light rail vehicle range.

“On top of that, the reverse cycle power- optimised substations were in our scope,” Coxon continues. “So that’s a number of new technologies we’ve brought to this iconic project, and it was great to see trams going down George Street – and great to be on that first tram.

While Alstom’s share of the project was successful, Coxon is well aware of the disruptions caused throughout the overall project’s delivery. But he’s confident the quality of service passengers will enjoy in the longer- term will make up for it.

“It’s obviously become a well-known project to Sydneysiders, and it’s been quite disruptive to residents during construction. But over time, I am sure the people of Sydney will appreciate the project, particularly as journey time reduces and the reliability continues to grow,” he said.

“To be honest, these projects historically around the world are quite disruptive, and this is on one of the oldest and busiest streets in Australia. It would be difficult to implement that kind of project anywhere in the world. We managed to get this one online in 2019, a bit later than planned, but the opening has been successful and we look forward to the growth of patronage of that system.” 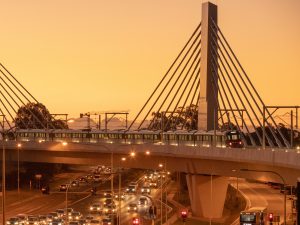 Despite all the exciting new technology in Sydney’s new light rail, perhaps the most exciting thing delivered by Alstom in Australia during 2019 was north of the city.

When Sydney Metro Northwest opened on May 26, passengers rode on a fleet of 22 new six-car, driverless metro trains from Alstom, which also delivered signalling and will handle ongoing maintenance work.

In its first six months, the new metro line had serviced more than 11 million journeys.

“It’s been a successful journey,” Coxon said. “It’s the first driverless metro system in Australia, so that took some time for passengers to get used to, but the reliability growth that we’ve seen on our system has been as expected, and very similar to other projects around the world. Today, we’re getting to around 99 per cent availability of the system.

“That project contains two successful aspects for us: the Alstom rollingstock but also the signalling system, our CBTC driverless Urbalis 400 system. The integration between the CBTC system and the rollingstock has been extremely good, and I think that’s one of the advantages of being an integrator of both technologies.”

The success on Sydney Metro Northwest led the NSW Government to exercise a pre-agreed extension in the original contract to the next portion of the line, Sydney Metro City and Southwest. The news – a $570 million win for Alstom – means Coxon’s team will now deliver another 23 trains (with an option for more), and its Urbalis 400 CBTC along the new portion of the line.

Coxon told Rail Express the extension demonstrated the government’s confidence in Alstom and its colleagues in the Sydney Metro delivery team.

“We always knew the success of Northwest would be a critical component on the augmentation for City & Southwest,” he said. “It’s such an iconic and strategic project for Alstom, and City & Southwest is a similar scope to what we executed on Northwest. Again I think it will demonstrate the importance of integrating the CBTC signalling technologies with the rollingstock.”

Once complete, the City & Southwest project will combine with Northwest to create a 66-kilometre continuous line, complete with Alstom rollingstock and signalling.

“We’re looking forward, as well, to extending the maintenance scope to that full line,” Coxon added.

Alstom’s success in 2019 wasn’t limited to the east coast. Early in December it finalised a $1.3 billion deal to deliver 246 EMU railcars 6 DMU to PTA, the public transport operator in WA. Under the 10-year contract, at least 50 per cent of railcar assembly will take place in WA, at a 12,000 sqm plant near the old Midland Railway Workshops. Alstom will also undertake maintenance for 20 years with the option to extend to 30 years.

Coxon told Rail Express the contract win was the result of more than two years of work with the government, local businesses, training organisations and community.

“We’ve had a lot of engagement with local and international suppliers about the local content, and that concluded with the award of that project to Alstom, which we’re absolutely delighted with,” he said. “We’re looking forward to building a train in Western Australia that the people of Perth can be proud of.”

Work to build what will become Alstom’s new rollingstock base in WA is expected to be completed in 2021. Local work under the contract is expected to create at least 200 jobs in supply and maintenance, revitalising the state’s rail manufacturing sector.

“Obviously, it’s a long journey, and we’re going to be part of that recreation of the railcar manufacturing industry in Western Australia, but that’s not the first time Alstom have done that,” Coxon said. “We’ve done it all around the world; the US, South Africa, India, and of course 20 years ago in Victoria with the X’Trapolis trains.

“We’re not newcomers to it, but it is a new journey in Western Australia, and  we’re interested in taking the suppliers on board for that journey, as well as our future employees. We’re going to have to build up a strong skilled workforce in Western Australia.”

Coxon said Alstom is also looking to build a good partnership with the state’s Public Transport Authority, along with its suppliers to build a train which we hope to have on tracks by the middle of 2022.

“What made that contract so attractive to Alstom was the long-term maintenance contract, which allows us to make sure the rollingstock is designed to maintainability as well,” Coxon explained. “We’ll build a strong workforce for the build, and then progressively for the maintenance.

“We’ve included in the project our HealthHub technology which focuses on the predictive maintenance capability, to ensure we’re maintaining the core components as they’re being used, and we can plan our maintenance schedules to optimise availability of the product. That’s a similar product to what we’ve installed for the Sydney Metro, so it’s not the first time we’ve installed it here in Australia, but again is a first for Western Australia.”

Next X’Trapolis in the works

Alstom has been supplying its X’Trapolis metro fleet to Melbourne’s Metro Trains network for nearly two decades, with more than 102 trains delivered. “It has proven to be one of the most reliable products in Australia today, so we’re very proud of this product and our skilled workforce in Ballarat who deliver this,” Coxon said.

After being awarded the preliminary design contract for an X’Trapolis 2.0 in late 2018, Coxon said the team spent a large portion of 2019 working with the state towards a new generation of the successful train.