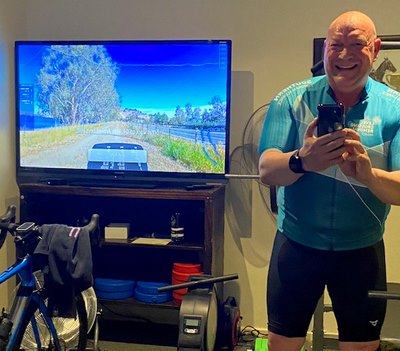 Sixteen Metro Trains Melbourne employees have raised more than $50,000 for charity by riding 390 kilometres around Australia – all from the comfort of their own homes.

The Pristine 16 peddled their hearts out and raised an incredible $31,066, which will pay for nearly 800 lifesaving calls to Lifeline.

Metro CEO Raymond O’Flaherty said the company would contribute a further $20,000 to the campaign, bumping up Metro’s total contribution to more than $50,000.

Metro’s Projects division Team Leader Alan Campbell came third as an individual fundraiser for the event, raising a total of $8,205.

Capmbell has been riding for almost three years and is passionate about supporting Lifeline and raising awareness of mental health and suicide prevention services.

“Our rail industry and our community as a whole have had our struggles during this pandemic and I wanted to help in any way I could, more importantly, I wanted people to know that they weren’t alone,” he said.

Metro Trains Melbourne is an ongoing supporter of Lifeline. To find out more,  visit lifeline.org.au.