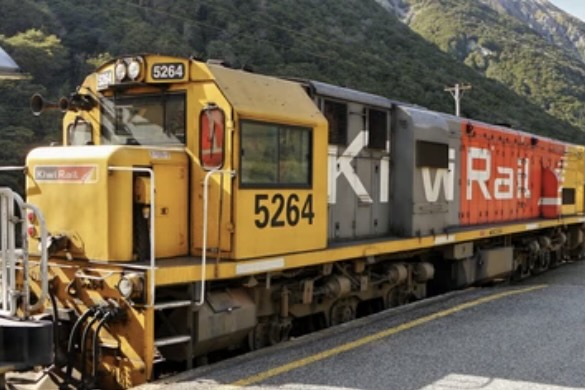 KiwiRail and Auckland Transport have moved quickly to address issues raised by a report into track damage caused by rolling contact fatigue (RCF), which led to widespread speed restrictions across the Auckland rail network.

The Auckland RCF Working Group Root Cause Assessment Report spotlighted multiple causes, with historic underinvestment in Auckland’s rail track infrastructure singled out as one of the key factors.

It also identified insufficient rail grinding, poor underlying track condition, the design of the EMU trains and the wheel rail interface, while Auckland’s climate is also another likely contributor.

“The report highlights that to run a modern and reliable metro service, the underlying track infrastructure must have enough investment to ensure it is fit for purpose,” Moyle said.

“Over time, funding was provided to enable electrification, the double tracking on the Western line, new stations and to buy new electric trains, which led to a huge increase in demand with hundreds of additional services and tens of thousands more passenger journeys made on Auckland’s network.

“However, the funding for renewal and maintenance of the tracks themselves was left behind, so those services were mainly running over aging track. While catch-up work was planned, the deterioration of the rails outpaced those plans until last year’s discovery of the severity of the degradation.”

Once the problem was revealed, KiwiRail was able to move quickly, with the support from Auckland Transport.

“We know how important train service is to Auckland and our teams have worked since last August to carry out the urgent repairs, while minimising the unavoidable disruption to rail users,” Moyle said.

“We have also worked with Auckland Transport to secure the funding needed to address the historic underinvestment which led to the poor track condition across the wider network, and work is being done to improve drainage, formation, and the rail ahead of the opening of the City Rail Link.”

“Auckland Transport will work with KiwiRail on any changes needed to maintain and improve the quality of the network – including investigating any modifications that may be needed to our train fleet,” he said.

Moyle said 130km of rail was replaced in just seven months and KiwiRail is now working through the second phase to repair the more complex sections of track.

“We also now have regular rail grinding in Auckland to repair the early stages of the damage while we work to address the other underlying causes,” he said.

“We are also developing a multi-year asset management plan for the Auckland metro network which will include a comprehensive rail grinding program and takes account of post CRL levels of service.

“Working groups are being set up to look more closely at optimising the wheel rail interface between the trains and the track, and to consider whether changes are needed to the EMUs.”

The track remediation work is part of a $1.5 billion project to modernise and improve the Auckland metro rail network. Others include the ‘third main’ project to ease congestion and allow for extra services on the busiest part of the network between Westfield and Wiri, the extension of electrification to Pukekohe, and three new stations at Drury and Paerata.