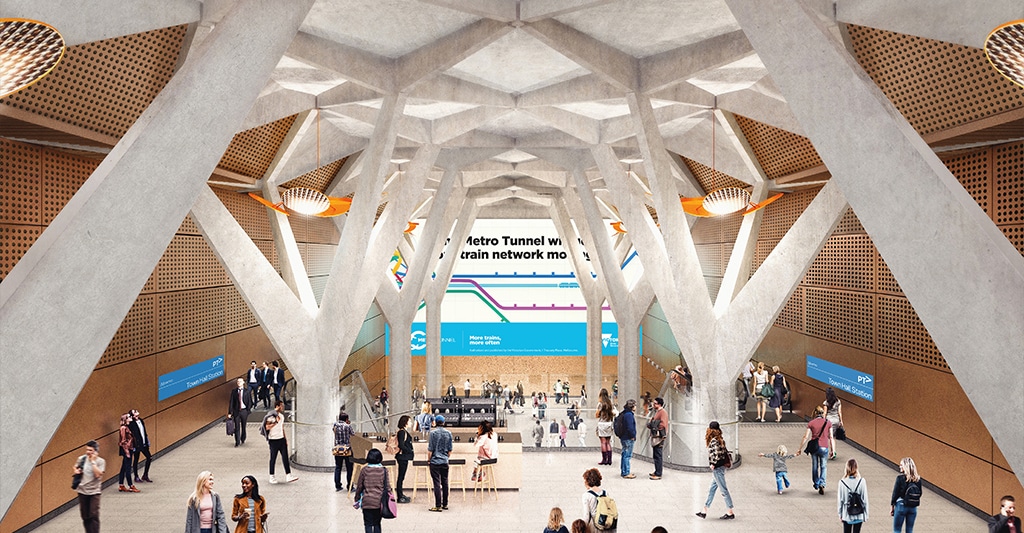 The Victorian Government has unveiled the spectacular interior of the Metro Tunnel’s Town Hall Station – showcasing platforms that stretch from City Square to Federation Square, more than 30 metres below Swanston Street.

The Metro Tunnel will transform Melbourne’s train network, delivering more trains to and from the suburbs – slashing travel times by up to 50 minutes each day.

More than 21 million hours have been worked on the project so far – creating thousands of jobs.

Town Hall Station is longer than a city block, as deep as a five-storey building, and has some of the widest platforms in the world. It’s “trinocular” design of three overlapping tunnels creates a cathedral-like atmosphere, with soaring arched ceilings up to 10 metres high with platforms that spans 260 metres.

Town Hall Station will be a new gateway to Melbourne landmarks such as Federation Square, ACMI, and St Paul’s Cathedral – and have a direct underground pedestrian link to Flinders Street Station and the City Loop.

The first of two 50m-high tower cranes is in place over Swanston Street to allow crews to dismantle the acoustic shed at City Square. After four years, the shed will be dismantled piece by piece, with specialist crews removing each panel by hand and the tower cranes being used to lift the pieces onto trucks for removal.

Works will soon begin on the upper levels and above-ground entrance at City Square – one of seven station entrances that will take people to Metro Tunnel services and, in 2029, Airport Rail services.

City Square is one of iconic locations in and around the CBD that will be gradually handed back to Victorians over the coming years as construction wraps up on one of the biggest rail projects in the state’s history.

Earlier this week the Degraves Street subway at Flinders Street Station was closed for workers to start installing lifts from the subway to station platforms. The new lifts will ensure all passengers can move between Flinders Street and Town Hall stations and access platforms easily.

Work to connect the new pedestrian walkway that runs from Town Hall Station under Flinders Street to Campbell Arcade is well underway, in a plan that will preserve the heritage features of this much-loved Melbourne arcade.

Meanwhile, work is station and tunnel fitout at Town Hall Station and across the Metro Tunnel Project, as the project team works towards the start of train testing in the tunnels next year.

Transport Infrastructure minister  Jacinta Allan said the Town Hall Station would become an iconic part of Melbourne once it opens – connecting people to fast, frequents services though the Metro Tunnel and across Victoria, a year early.