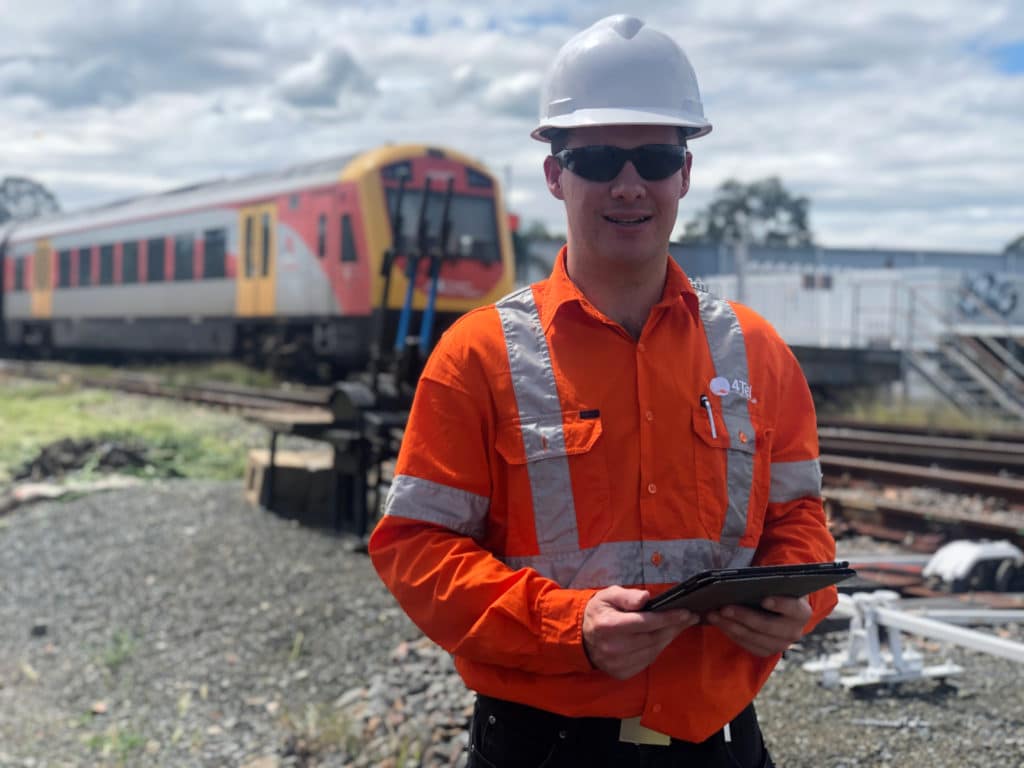 Track maintenance and repair work is of course a constant requirement to ensure safety of journeys along the rail lines.

When this is carried out, it is necessary to ensure that the section being worked on is protected and clearly notified to rail operators: a task carried out by a repair crew’s protection officer in liaison with the network controllers.

Yet in this day and age of advanced technology, communication between parties to gain permits to work and Track Occupancy Authorities (TOAs) often still takes the form of phone calls – which may go unanswered during busy periods – and tedious paperwork, which can be time-consuming and contribute to workforce inefficiencies.

All that is set to change with wider usage of an electronic Permit-To-Work (PTW) system for managing authorities to support track maintenance activities, developed by Newcastle-based software and hardware engineering firm 4Tel – a company specialising in rail systems, providing rail technology and services to both domestic and international companies.

Named 4PTW, the tool includes a mobile application (app) for use by protection officers and a central server to integrate this into the train control environment.

“By replacing these phone calls with secure data messaging, users have been able to realise significant workforce efficiencies,” he said.

“Using the app to transact with the central server, workers do not need to seek train controller authority for low-risk activities. This significantly reduces non-productive time for track work staff waiting for network controller attention and clearance.

“Conversely, a busy controller no longer needs to transact all track work matters and is relieved of most routine matters previously requiring interaction. For these reasons alone, 4PTW is a very powerful tool for improving track worker efficiency.

“When 4Tel began the process of developing a track worksite protection application, there were three questions that we were asking ourselves.

“Can we use technology to improve risk control effectiveness for track work activities? Is it possible to provide efficiencies to increase time on track? Can we make the technology cost effective and use equipment that track workers already have?

“The answer to each of these questions was ‘Yes’.

“Over the past five years, 4Tel has been able to deliver significant operational benefits by improving the process of obtaining approval to conduct track work activities.”

4PTW has been developed to address the numerous risks associated with performing track work in complex and multi-faceted rail networks.

The benefits include reduction of verbal communication leading to human error, increased location assurance through map displays, clarity on agreed arrangements through transparency of information, and enforcement of staff competency using login credentials.

The principle risk controls have been developed around providing a means of location assurance and reducing the reliance on verbal communications to communicate safety critical information.

“The app includes a map display, which enables the protection officer to view the authority and worksite limits and confirm that the correct region is being blocked from trains to ensure repair work can be carried out,” Hjort said.

“Unlike a static paper form, the 4PTW app interface can dynamically update as required. SMS updates are used extensively to notify protection officers about changes that are relevant to their track occupancy authority, informing them of when they need to refresh the application.”

These benefits can be realised through the use of existing technology available in most iOS and Android phones, and can be increased based on the level of control system integration. 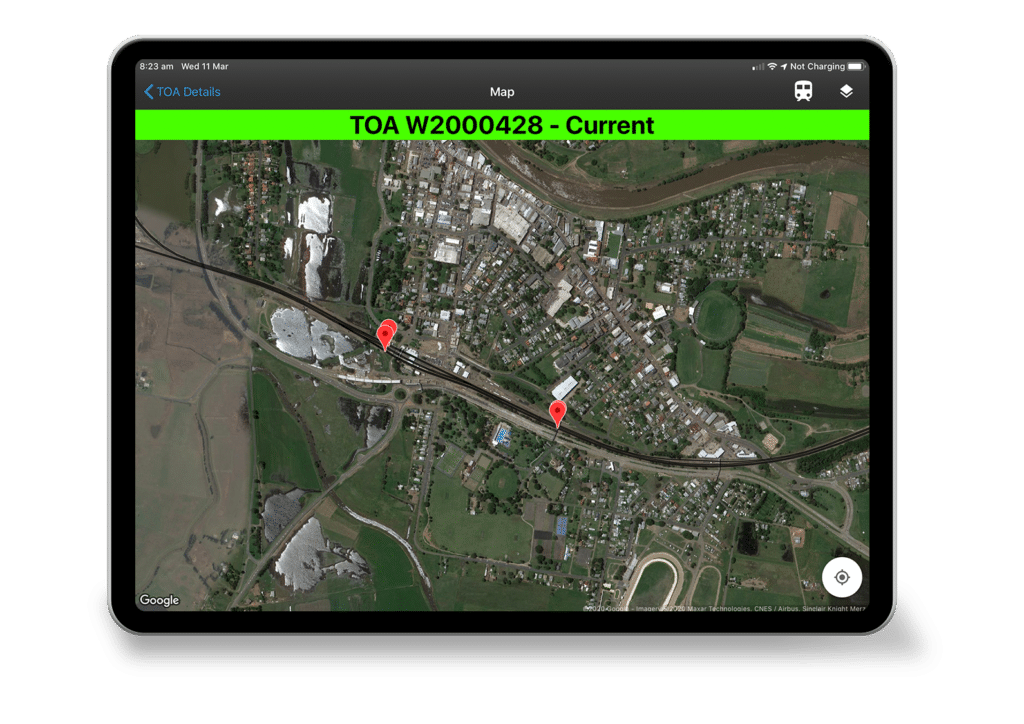 One of the first users of 4PTW has been the Australian Rail Track Corporation (ARTC), which operates rail networks across five states.

The software was commissioned by the ARTC and modified specifically for its staff and contractors on the NSW network.

Named eTAP (for Electronic Track Access Protection), the app provides functionality for protection officers that replaces the traditional requirement to complete paper TOA forms and phone calls to network control for Look Out Working (LOW) and Working In Corridor (WIC) notifications, needed to obtain the necessary safe working protection for work along the organisation’s rail lines.

ARTC deployed eTAP into the whole of the ARTC-managed NSW network in February 2020.

According to ARTC Project Manager of Operations Services, Stewart Haycock, 4Tel was able to make enhancements to the app to suit ARTC’s specific requirements, and provides a continuing service to maintain, improve and upgrade the system.

Haycock said the widespread use and quick uptake of eTAP in NSW has proven how user-friendly and efficient the tool is.

“From day 1 the utilisation of eTAP started at 70 per cent, and then within a matter of weeks this quickly escalated up to 90+ per cent,” he said.

“While the use of eTAP is not mandated, 99 per cent of al TOAs, LOW and WIC transactions today are done through the app.

“It tells me that, firstly, the product is very good. If people don’t like something, they just won’t use it.  To see the use of eTAP sustained at that level means I think we really hit the mark well.

“The speed at which it was taken up meant there was a genuine craving from that particular user group – the protection officers – to use smart technology to make their lives better, safer and more efficient, in a highly pressurised environment in their day-to-day work.

“We’re also continuing to drive and look for new innovations and functionality to bring into the tool as driven by our end-users’ desires to continue to build on its capability.”

Haycock said the app was particularly valued by operators such as ARTC, which managed thousands of kilometres of track, and on which daily access for maintenance work is required by many dozens of maintenance crews, often at the same time.

“Because of eTAP we’ve seen a reduction of about 100,000 phone calls a year going into our two NSW Network Control Centres,” he said.

“That’s terrific from a network controller perspective, particularly at peak times for rail maintenance crews trying to access the network. You’ve got crews descending into the network at roughly at the same time, probably within an hour of each other, which means they’re all wanting to contact with control at the same time.

“So the volume of phone calls for network controllers at these peak times was very challenging to manage alongside prioritising other safety critical functions such as moving rail traffic safely through the network.

“Additionally, we’ve heard from protection officers who, when organising a simple 10 minute job, particularly in peak times, have been put on hold, waiting to speak to the network controller, for anywhere up to 30 minutes.

“And with eTAP, we’ve solved that pain point.”

Haycock said the longer-term aim was to expand the safe working access types that the app managed as well as introduce eTAP into the other states.

“We are starting the process of assessing what we can do with respect to introducing this really great tool into the other parts of the ARTC network so we can unlock all those terrific benefits,” he said.

As with eTAP, it offers an alternate means of documentation for using TOAs.

Only train controllers may still authorise TOAs, which give exclusive occupancy to the protection officer. A single worksite, including equipment, and associated rail traffic, may occupy the portion of track defined by the TOA.

Further updates to ETW have included Route Control Blocking, and a separate product, ETW-V, which is specifically designed for high rail vehicles providing a means for mapping their track vehicle journey within a TOA.