IMI Precision Engineering is using condition monitoring to improve the efficiency of its drying system for compressed air on rollingstock.

A drying system extracts moisture from air before it enters a train’s onboard systems – braking, doors, suspension and so on. In a typical rail dryer, a pair of parallel “towers” take turns performing this task: while one is absorbing moisture and feeding air to the train, the other is using a small amount of ‘purge air’ to dry itself out.

The frequency at which the system switches between towers is a key factor in the longevity and efficiency of the rail dryer. The amount of purge air required to dry the inactive tower is another key efficiency factor.

IMI Precision Engineering, which already has hundreds of its dryers installed on varied rollingstock in Australia and New Zealand, is tweaking the performance of its rail dryer through
condition monitoring.

“We’re now making it a smart dryer,” IMI’s Peter Raemers tells Rail Express. “By putting condition monitoring on it, we can regulate the amount of dry air needed to regenerate the second tower.

“By only using as much purge air as you need, the compressor feeding that purge air doesn’t need
to be used as often. Additionally, by properly monitoring the condition of each tower, you can also minimise the frequency of cycles required.”

While traditional systems feature towers filled with small desiccant beads wrapped in clay as a binder, IMI extrudes the desiccant into narrow tubes which are impervious to water.

“The problem with clay is, as it gets wet, it starts to break down,” Raemers explains. “That can be quite destructive and inefficient. If you don’t dry the air properly, systems can become water laden, leading to rust and other issues, and if the clay binder breaks down that can enter the water as well, which can bung up those systems with sludge or sand.”

Raemers says side-by-side testing has shown the AMT (Adsorbent Media Tube) solution as more effective and efficient than a clay-based system. The technology also means the system can be equipped horizontally or vertically, allowing for more flexibility for rollingstock owners and manufacturers.

“It really is a fit and forget solution,” Raemers says. “And the improvements in air quality are also passed down to components around the train for more lifetime improvements and further lengthening of maintenance cycles.”

“One thing we do as a company is work with the rail sector and investigate what they see as issues, what we can do to help them, and how we can make ourselves more proactive in dealing with the customer,” Raemers explains.

One product of this is IMI’s pneumatic gate for at-grade pedestrian crossings. The gate, designed by IMI’s Sydney team, has so far performed almost 30,000 operations without trouble over a trial in the Sydney metropolitan area.

The pneumatic gate looks to address a key flaw in typical electric gates: if power is lost, they can jam in an open position – an understandably dangerous possibility.

IMI’s system relies instead on more efficient pneumatic power, with a failsafe spring to shut the gate in case power is lost.

The low-maintenance system is contained within a compact, robust unit and relies on a single moving part. Pneumatic control is dictated by a pair of solenoids, which are directed by electrical signals, typically from the operator’s control system.

When the gate is shut, it is held shut with a significantly higher force than when it is in the open position, and an in-built hydraulic damper regulates opening and closing at a reasonable force.

With no cranks or gearing, IMI says it can guarantee up to four million operations, maintenance free, and a ten-year life before a service is required for major parts.

The company is looking to market the system to networks around the rest of Australia and in New Zealand. It is designed to work as part of an existing pneumatic system, or can be set up with its own pneumatic system, powered through mainline power or solar power, with the latter solution optimising it for regional applications.

“Pedestrians everywhere are often looking at their phones with their headphones in,” Raemers says. “Even then, improvements onboard trains themselves mean the noise and vibrations through the ground are disappearing. If you lose all those indicators, it’s very easy for an accident to happen.” 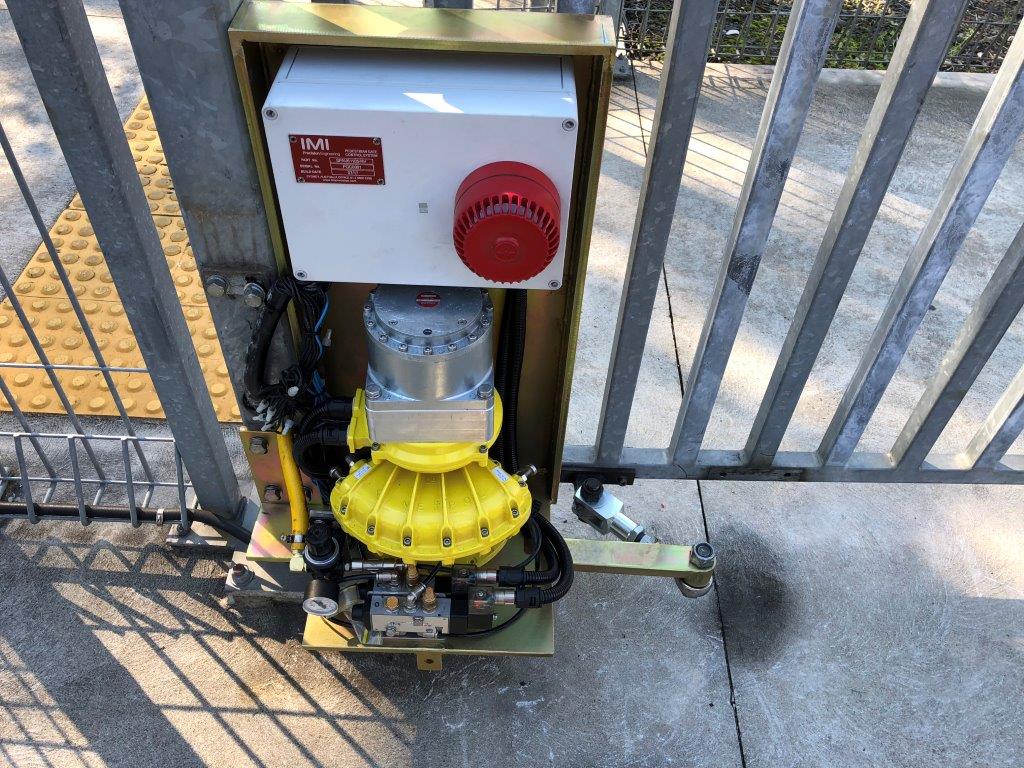 The gate is part of an ongoing trial.