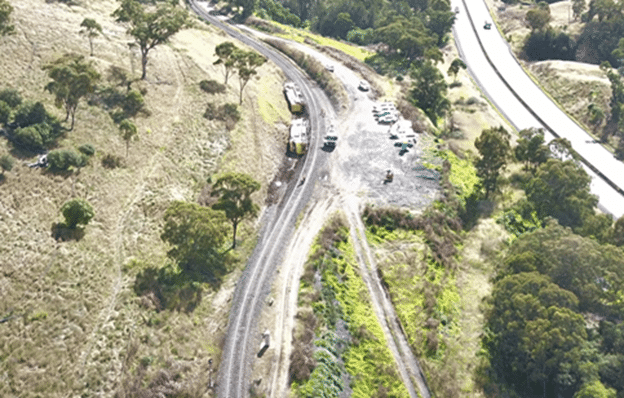 A pair of banking locomotives rolled away and derailed during a change of ends in at Ardglen bank in the NSW Hunter region after their parking brakes failed and the crew was unable to regain control, a transport safety investigation report details.

On the evening of 3 June 2020, two Aurizon banking locomotives had just assisted a loaded coal train up the Ardglen bank in the Hunter Region of NSW when they came to a stop to prepare for a change of ends.

While the two members of the train crew were transferring between the units, they began to roll back down the Ardglen bank. The crew were able to board, but during the runaway event, the locomotives travelled about 3 km, and reached speeds of 114 km/h, before derailing and overturning on their side, and coming to a rest 13 metres apart.

The train crew sustained minor injuries in the accident and were able to exit the cabin. Both locomotives were significantly damaged, and about 100m of track was damaged.

“This released the automatic air brake application on both locomotives,” she said.

The park brakes were then ineffective in holding the locomotives on the grade at Ardglen, and the banking locomotives started to roll away.

The investigation found Aurizon’s relevant work instruction lacked specific detail about how to safely change ends – this information was included in the Operator’s Manual and also detailed in training documentation.

“Without the step-by-step information being detailed in the work instruction, Aurizon’s system did not provide a clear ‘how to’ for safely changing ends,” Pelham said.

“Work instructions in quality management systems explain ‘how’ things need to be done. In this case, the work instruction detailed ‘what’ needed to be done, but the ‘how’ was left to the train crew to carry out based on what they could recall from their training.”

The OTSI investigation also found that, during the runaway, the use of the forced lead function on the locomotives would likely have allowed the train crew to regain control, but the crew had not been trained to use this function.

Since the incident, Aurizon completed an internal investigation, and commenced and completed several actions to prevent a recurrence.

The operator completed modifications on the locomotive classes involved in the incident to improve alignment in the braking system, resulting in improved park brake force.

It also modified the procedure clarifying steps for changing ends and when to use forced lead function and monitoring, and began monitoring the correct application of the procedure through regular analysis of locomotive downloads.