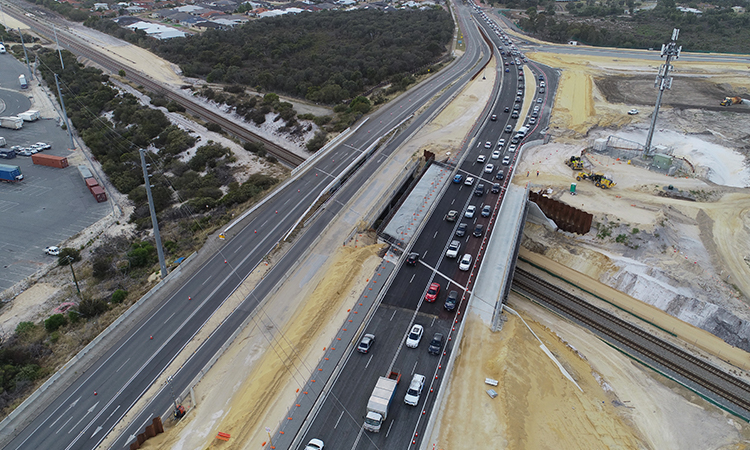 Traffic is flowing over part of the new Ranford Road Bridge being built for the METRONET Thornlie-Cockburn Link in Perth.

The switch from the old bridge was made overnight with traffic travelling in two lanes in each direction and using an upgraded section of Ranford Road, between Livingstone Drive and Bannister Road, Canning Vale.

Switching traffic to the new bridge allows demolition of the old bridge to begin, clearing the way for the final part of the new Ranford Road Bridge to be built and complete by 2023. When complete, the new Ranford Road Bridge will be higher and longer than the original with six general traffic lanes (three in each direction), plus a dedicated bus lane and shared path for pedestrians and cyclists on each side.

It will cater for an estimated average annual two-way traffic flow of 43,000 vehicles a day.

The new bridge is at the forefront of Australian engineering technology and features some of the largest pre-cast concrete tee-roff beams ever built in Australia. Seven of the required 10 50-metre beams were installed in May this year. The final three beams will be installed next year.

Each of the beams weighs 197 tonnes (the equivalent of 145 Toyota Corollas) and takes 10 workers and two concrete pump trucks three days to manufacture.

The beams were manufactured by local company, the Georgiou Group, at its precast yard in Hazelmere.

When the 17.5km Thornlie-Cockburn Link is operational in late-2024, passengers using Ranford Road Station will be able to travel to Perth in about 29 minutes.

To allow the Thornlie and Cockburn station connections to happen, the existing Mandurah Line tracks will be shifted further apart during a shutdown from 26 December for 20 days. This will allow the new Thornlie-Cockburn Line tracks to be built in between them.