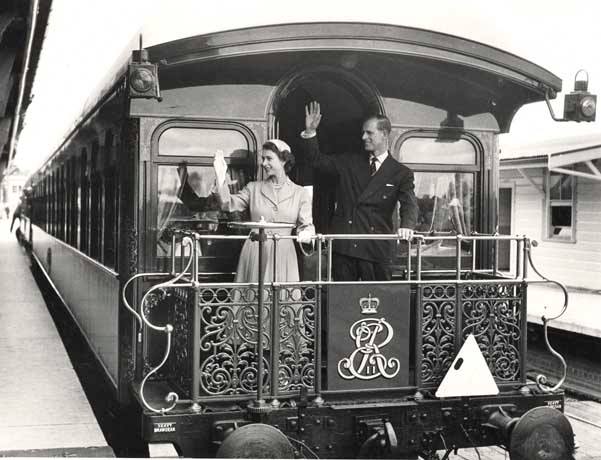 To mark the Platinum Jubilee of Her Majesty Queen Elizabeth II, Transport for NSW is remembering royal journeys on the rail network throughout regional NSW.

Over her 70 years of service, The Queen journeyed to regional NSW several times, including in 1954 and 1970 on transport provided by the NSW Government Railways. This included a Royal Train and a special bus that travelled on rail tracks.

“Rail lines and stations in regional NSW played a special role in ensuring the Queen was able to visit many areas of the state and local people could be part of the action,” he said.

“Looking back at these royal regional rail memories of decades ago also reminds us how critical the railway remains today in helping regional people stay connected.”

Heritage Specialist with Transport, Amy Keighran, said in February 1954, the Queen and Prince Philip made three regional journeys on the Royal Train.

“The Royal Train took the Queen from Sydney to Newcastle on 9 February 1954, then Her Majesty returned from a visit to Wollongong by train from Bulli to Sydney on 11 February and from Bathurst to Sydney on 12 February,” she said.

“They travelled in the Governor General’s carriage, which was ornately decorated with timber, leather and gold and had been renovated to include air-conditioning.”

For the Bathurst to Sydney trip, a special fabric-covered timetable was produced, featuring the Royal coat of arms and a railway locomotive wheel representing NSWGR. It listed the stations along the route over the Blue Mountains, their height above sea level, distance from Sydney and the time the train travelled through them.

Newspapers in 1954 reported that tens of thousands of people crowded onto station platforms to glimpse the first reigning monarch to visit Australia.

The Royal Train tours put significant demands on the NSW Government Railways (NSWGR), with ordinary services heavily loaded and special trains put on to transport people, including 150,000 school children, to vantage points along the routes.

For the 1970 Royal tour, special trains conveyed members of the public to and from Taree and Grafton for the Queen’s visit to Coffs Harbour.

“This was a four-wheeled vehicle that looked like a bus but ran on tracks. It was specially modified for the Queen’s tour, including being fitted out with carpet,” he said.

“For her only train trip on the 1970 tour, there was less fanfare than in 1954. The Queen left Sydney late on 29 April and arrived in Orange the next morning.

“The Royal Train, this time using the personal carriage of the NSW Rail Commissioner, was codenamed RL. Four pilot trains travelled ahead of it to ensure its safe passage and no other trains or rail operations were allowed on the track during the journey.”

The Queen’s Platinum Jubilee year was also marked by community events and iconic buildings and monuments around Australia being illuminated in royal purple to mark the occasion.