Dealing with rapid population growth has led to Melbourne upgrading the signalling system on two of its most congested lines. Rail Systems Alliance is ensuring the benefits are felt for years to come.

Over the past 10 years, the story of Australia’s cities has been rewritten. While Sydney had been dominant for the previous century, no account of the urbanisation of Australia in the second decade of the 21st century could ignore the rapid growth of Melbourne.

The relative growth of Melbourne is most clearly illustrated by the fact that Melbourne adds a Darwin-worth of population each year, overtaking Sydney in population size by 2026. Much of this growth has been concentrated in two areas, the west and the south-east of Melbourne and the rail lines that serve these expanding areas are reaching capacity. This has necessitated Victoria’s Big Build, the largest infrastructure building programme in the state’s history, of which rail plays a major part, highlights David Ness, package director, Rail Systems, Rail Projects Victoria.

“There’s a number of initiatives underway to help alleviate that population growth, one is the introduction of larger trains that can carry more passengers, and then the second part is the provision of High Capacity Signalling (HCS) on the corridor that lets us run more trains, more often.

“What ties all of that together is the Metro Tunnel project that connects those two corridors, Dandenong in the south-east and Sunshine/Sunbury in the west, and allows us to untangle the existing rail network. It’s a combination of things but HCS is the centre point, allowing you to operate more efficiently on the corridor.”

The HCS project, now in its testing phase, is being delivered by Rail Systems Alliance, a partnership between Bombardier Transportation, CPB Contractors, and Metro Trains Melbourne. The project will introduce Communications-Based Train Control (CBTC) technology, the BOMBARDIER CITYFLO 650 rail control solution, on both the Sunbury and Cranbourne/Pakenham lines as well as in the newly built Metro Tunnel, creating a new end- to-end rail line from Sunbury to Cranbourne and Pakenham. The two existing lines are some of the most complex in the Melbourne network, not only serving commuter trains, but regional passenger lines and freight services, requiring a mixed-mode solution, said Tim Hunter, alliance manager, Rail Systems Alliance, Metro Tunnel Project.

“What is unique about Melbourne is the fact that we’re upgrading existing lines, on brownfield sites, as well as the greenfield site in the tunnel. That means that we can continue running the existing trains on the existing lines at the same time as we do the upgrades. As the vehicles become fitted with the CBTC technology then they can run either in the conventional signalling or CBTC mode. The beauty of it is that it’s a mixed mode solution for the existing lines.”

The introduction of moving block rather than fixed block signalling will enable a step change in capacity, even under mixed conditions.

“We’re expecting to open with around 18 trains per hour when we will still have a mixture of CBTC trains and regional and freight trains,” said Ness. “But, as time progresses, the system itself has a capacity of 24 trains per hour. That means it actually has a higher capacity to recover from disruptions that may occur, and the Metro Tunnel will be capable of 24 trains per hour.”

ENSURING EFFECTIVE IMPLEMENTATION
Getting to this targeted level of capacity on the first introduction of CBTC technology on an existing rail line in Australia has required a collaborative approach, facilitated by the nature of the Rail Systems Alliance.

“We went through a pretty extensive, year-long competitive alliance tender process,” said Ness. During the process, Rail Projects Victoria looked at the system’s capabilities, the ability to minimise disruption during integration, and did site visits to other HCS projects internationally.

Taking an alliance approach to project delivery allowed for the project to effectively interact with the many other stakeholders involved. While the technology promises to increase capacity and relieve the strain on Melbourne’s rail network, its success depends upon all elements of the wider project working together.

“We have the technology challenge, in that what we’re introducing into the system is new, but that change is not just operational, it affects the entire way in which the network is run,” said Ness.

The introduction of HCS in Melbourne requires the project to interact with a variety of stakeholders, including the rest of the Melbourne rail network, the other consortiums on the Metro Tunnel Project, and the procurement of larger trains, which is being delivered in parallel.

“The alliancing model provides the most flexibility to adapt and move while maintaining your focus on that end game,” said Ness.“It’s very difficult to do a project like this with just a fixed scope, fixed dates, fixed price, fixed everything. Having a target price that you can adapt and working together with the client has been proven to be the best model.”

In practice, this has enabled a regime of extensive testing for the technology on the rail line. On the Mernda Line wayside equipment has been installed and two existing X’Trapolis trains have been fitted with the Bombardier CBTC equipment. Dynamic testing is now underway. The project has also involved the operator, Metro Trains Melbourne, to prepare the end user – the drivers and operators of Melbourne’s trains, as Hunter outlines.

“We’re setting up additional labs so we can test the train management system for the new trains alongside HCS. We are also taking the equipment and systems that have been implemented inside the tunnel and then testing that with our systems in the lab, so that when we go to implement on site we will have done as much testing as we can offsite. This will make implementation testing and fault finding a lot smoother.”

The hands-on approach to testing enables the end users (for example, train drivers) to become “super users” as the design develops and the new technology is introduced as part of the project.

“We have user working groups within Metro Trains Melbourne to facilitate operational and maintenance input,” said Hunter. “We’ve done a lot of on-site training, we’ve taken them to Bombardier’s CBTC facilities in Bangkok, Madrid and Pittsburgh and shown them what has been done on other projects, and how the technology works. This collaboration is critical to successfully implement HCS on this project.”

Hunter explains that each piece of equipment that drivers or operators use goes through an extensive human-centred design process, with safety front of mind.

“It’s a tremendous amount of work but I’ve learnt from other projects that it’s essential because in the end we want the people who will be using the technology to really feel as though they own it.”

One example where this has occurred is in the design and purchasing of the desks that will be used at operations centres in Sunshine and Dandenong.

“We’ve got the actual desk that we’re proposing to use in the control centres in our office in Bourke Street and we invite people from Metro Trains Melbourne to come and look at, sit at, use, and test it.” 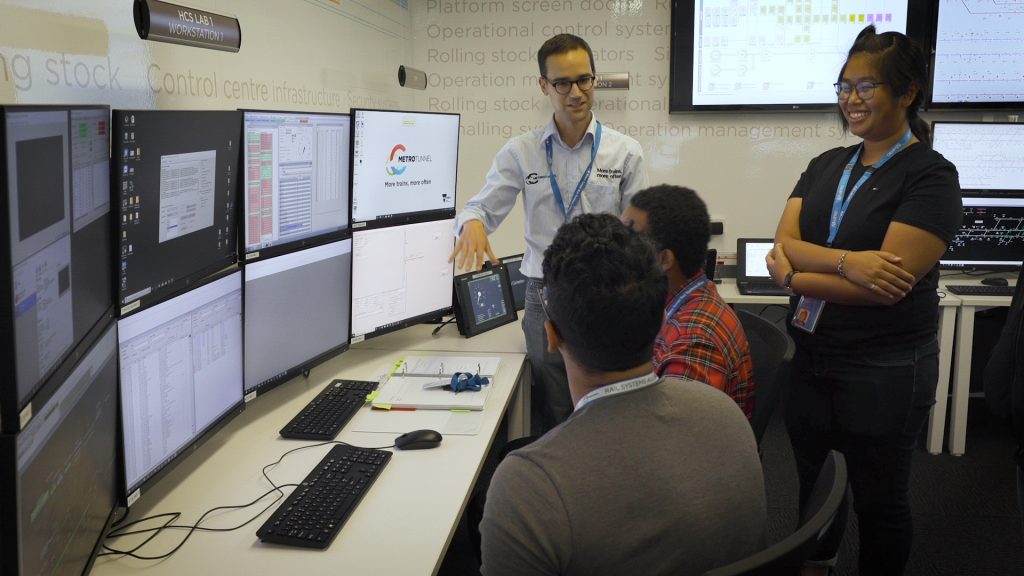 PREPARING FOR THE FUTURE OF HCS
While signalling upgrades on two of Melbourne’s busiest lines will have an immediate benefit for commuters, Rail Systems Alliance has also been aware of the need to ensure that investment in the project benefits the wider rail industry. While experiencing unprecedented investment, the rail industry is looking at a looming skills crisis. As one of the first rollouts of CBTC technology, the HCS project aims to train the next generation of signalling engineers.

“We’ve got roughly 35 cadets coming through the project,” said Hunter. “We’re working closely with the Victorian government and the Local Jobs First – Major Project Skills Guarantee but it’s important that we’re building a base for future projects.”

While signalling projects such as HCS have needed to hire talent internationally, Hunter hopes that this won’t continue to be the case.

“We’ve had to bring a lot of people in from overseas – including myself – who have done these kinds of projects around the world but that’s not a sustainable model. What you actually want is a strong, capable, local team, so that’s what we’re setting out to do. We’ve got cadets working on signalling design, onboard equipment, the control systems, the communications systems, the radio systems, systems engineering, and systems safety assurance.”

Having such a major project occurring in Melbourne has a drawcard for attracting the next generation of engineers to rail.

“As soon as they join, I sit down with them and talk about the project and how exciting engineering is on these kinds of projects.”

“University is a good starting place for technical knowledge, but to have the opportunity to work on a project of this size and this complexity on their doorstep is too good to miss,” said Hunter.

While there’s no concrete plan to roll out HCS beyond the existing project scope at this stage, efficiencies of already implementing the technology mean that any future upgrades would be even smoother.

With a competent and experienced local workforce, and upgrades in place on two of Melbourne’s most complex lines, Melbourne would be well-placed to extend HCS over the rest of the existing rail network said Ness.

“Our focus right now is to successfully deliver HCS on the Sunbury and Cranbourne/ Pakenham corridor. However, if you look at Melbourne’s growth, and some of the pressures on the rail network, HCS may be one future option to get the most out of the existing infrastructure,” said Ness.